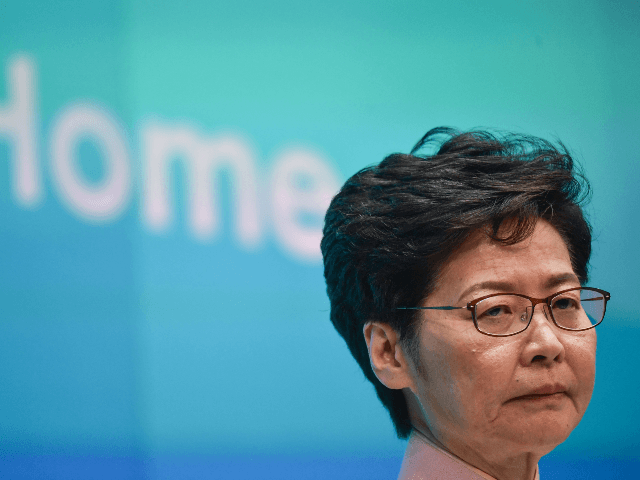 President Donald Trump signed the act last week after it unanimously passed the House and Senate. The Act requires the State Department to annually evaluate the state of human rights and fundamental freedoms in the capitalist city and, if found to be lacking, revoke Hong Kong’s special trade status with America. The bill also protects Hong Kong’s pro-democracy protesters by ensuring that unjustified protest arrests do not block a request for a U.S. visa.

Trump also signed a law that bans American companies from selling tear gas and anti-riot gear to the government of Hong Kong. Much of the world’s tear gas supply comes from Pennsylvania.

Lam said during a press conference Tuesday that the act – and not China’s increasingly authoritarian actions that triggered the ongoing protest movement – created an “unstable environment” economically in the city, which has lost about two percent of its GDP since protests began in June and is facing record retail losses.

Lam called the act “completely unnecessary and unjustifiable” as the Chinese government, according to her, has not violated the rights of any citizens.

“Hong Kong’s human rights and freedom are protected by the Basic Law,” she said, referring to the constitution of the city that preserves its capitalism under the “one country, two systems” policy. “In fact, I want to ask which aspect of Hong Kong residents’ freedom was eroded? We have press freedom, we have freedom to participate in rallies and marches. We have religious freedom. We have a high degree of freedom in many aspects.”

The chief executive refused to take responsibility for the extensive police brutality against protesters, which have taken peacefully to the streets since June but increasingly found themselves forced to defend from police attacks. In the most violent incidents so far, students at Hong Kong Polytechnic University (PolyU) defended from a campus siege by police using Molotov cocktails aimed at police vehicles and firing arrows at officers trying to invade. Police ultimately overran the campus, but not before hundreds trapped on it staged daring escapes swinging off of bridges and navigating sewers.

Police once again attacked protesters throughout the weekend, who gathered with more gusto following the passage of the U.S. act. On Thursday, thousands took the streets waving American flags for a “Thanksgiving” rally to celebrate President Trump and Congress for standing with the protesters.

Lam denied any police improprieties in the protests, though protesters disseminated images of police brutality widely through social media.

“I have said that we hope to have a way to stop the violence and let our economy recover. Now cold water has been poured [over chances of recovery],” she lamented, referring to the Hong Kong Act as the “cold water.”

Lam also reportedly claimed that the U.S. Hong Kong act would hurt the over 1,300 American businesses operating in Hong Kong as it would damage Hong Kong’s economy generally.

She refused to comment in detail on Hong Kong’s response to the United States, affirming that, as China has sovereignty over the city, Beijing would execute any acts in response to the act and the Hong Kong government would comply without question.

On Monday, the Chinese communist regime announced it would ban port calls in Hong Kong by the U.S. Navy as a preliminary move.

“Recently, in disregard of China’s opposition, the US signed into law the so-called Hong Kong Human Rights and Democracy Act. This is in severe violation of international law and basic norms governing international relations and serious interference in China’s internal affairs,” Chinese Foreign Ministry spokesperson Hua Chunying said on Monday:

In response to the unreasonable U.S. practice, the Chinese government decides to suspend reviewing requests of U.S. military vessels and aircraft to visit Hong Kong starting from today and to impose sanctions on NGOs that played a egregious role in the recent disturbance related to an amendment bill in Hong Kong, including the National Endowment for Democracy, the National Democratic Institute for International Affairs, the International Republican Institute, Human Rights Watch and Freedom House.

By their very nature, non-governmental organizations (NGOs) are not tied to the U.S., or any other, government, but Hua insisted that the groups “have supported anti-China plotters who messed up Hong Kong through various means, aiding and abetting them in extreme violent criminal acts.”

“They are much to blame for the chaos in Hong Kong. The sanctions are rightly imposed as these organizations shall pay the price for what they’ve done,” Hua said.

Last week, China’s state-run propaganda newspaper Global Times suggested that “experts” were encouraging the Chinese government to refuse to give visas to members of Congress responsible for the acts, imposing sanctions on “relevant” individuals hurting communist interests in Hong Kong. Would-be pundit and Global Times editor Hu Xijin independently claimed that visa restrictions against “odious” members of Congress were in consideration, though he did not name the culprits.

One issue with sanctioning members of Congress is the fact that all members of Congress voted for the bill. China could attempt to sanction only the sponsors of the bill, but it has no supporters within the American legislature in its attempt to continue to allow Hong Kong police to repress citizens for exercising basic human rights.

Hong Kong residents took to the streets this summer to demand the city’s Legislative Council withdraw a proposed bill that would have allowed Beijing to extradite anyone present in Hong Kong accused of violating communist laws, which do not legally apply in the city. Lam has since ceded to that demand, but the protesters are still making five others: freedom for their political prisoners, an independent investigation into police brutality, an end to calling protests “riots,” and the right to vote into office every single member of the legislature, many of which are now appointed by special interest groups.