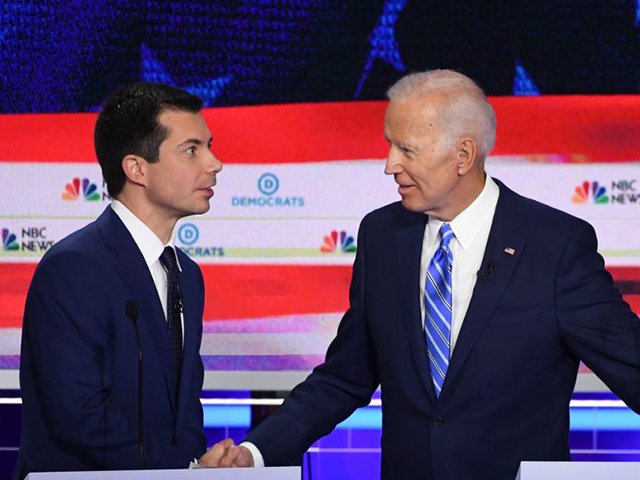 Biden, who was one of the first 2020 Democrats to spurn Medicare for All in favor of a public health insurance option, leveled the claim while talking to reporters aboard his “No Malarkey” bus tour in Iowa.

The accusation arose when reporters asked Biden if his initial stance against Medicare for All had made it more politically viable for candidates like Buttigieg to criticize the plan themselves.

The former vice responded that he had not simply set the stage for Buttigieg, as much as the mayor had lifted his proposal for a public option and tried to pass it off as original.

When pressed, Biden said he was unsure Buttigieg’s theft would do him much good since any enthusiasm generated by the plan would be attributed to the former vice president.

“No, he doesn’t have the enthusiasm and the moderate — moderate plan,” he said. “It’s the Biden plan.”

The accusation comes as Buttigieg has risen to front-runner status in both Iowa and New Hampshire. Part of that rise has been accentuated by the mayor’s charisma, youth, and what some see as a willingness to embrace more moderate positions.

Championing ideas like “Medicare for All Who Want It,” which proposes the creation of a public health insurance option, Buttigieg has been able to create a contrast between himself and progressive firebrands like Sens. Bernie Sanders (I-VT) and Elizabeth Warren (D-MA) in the early nominating contests.

Buttigieg’s rise, while not coming explicitly at Biden’s expense, seems to have caught the former vice president’s attention. In particular, Buttigieg’s position in Iowa seems likely to run up against Biden’s hopes of mounting a comeback in the state.

Not only was the mounting tension between the two men displayed in Iowa on Monday, but its also likely to extend beyond policy differences. Biden signaled as much when he lambasted the media for going easy on Buttigieg, implying the mayor’s position atop the polls was the result of not being held to the same standards as other candidates.

“What would you have done to me?” Biden asked reporters, regarding the accusation Buttigieg stole his healthcare plan. “You would have torn my ears off.”

“I would be a plagiarizing, no good, old man who did bum bum bum,” the former vice president added.

Florida boy, 9, saves dad who fractured his neck in swimming...