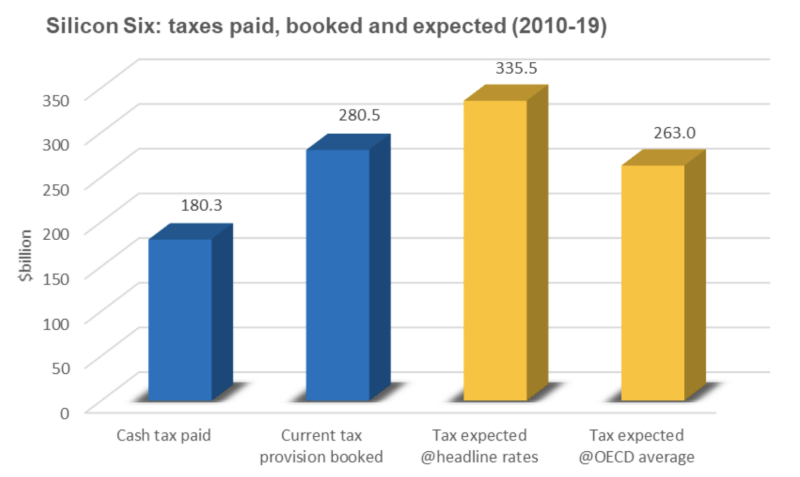 Amazon (AMZN) has been accused of being the most ‘aggressive’ in avoiding tax, compared with other tech giants, by tax transparency campaign group Fair Tax Mark.

In a new report, the ‘big six’ tech firms — Amazon, Facebook (FB), Google (GOOG), Netflix (NFLX), Apple (AAPL) and Microsoft (MSFT) — were all accused of “aggressively avoiding” $100bn (£75bn) of global tax over the past 10 years by moving sales and profits through low-tax countries and tax havens — such as Bermuda, Ireland, Luxembourg, and the Netherlands.

The report claims that these group also delay the payment of taxes that they do rack up.

“Our analysis of the long-run effective tax rate of the Silicon Valley Six over the decade to date has found that there is a significant difference between the cash taxes paid and both the headline rate of tax and, more significantly, the reported current tax provisions. We conclude that the corporation tax paid has been much lower than is commonly understood,” said Paul Monaghan, CEO of the Fair Tax Mark.

“The international tide is turning on the acceptability of corporate tax avoidance. The idea of countering the profit-shifting of Big Tech multinationals via the introduction of digital sales taxes has taken root in many countries. Investors need to look afresh at the future impact that this will have on company valuations and income flows.

“Not least because the OECD is now leading multilateral efforts to address the tax challenges from digitalisation of the economy, and is looking to ensure that profitable multinationals pay tax wherever they have significant consumer-facing activities and generate their profits.”

Fair Tax Mark ranked all the big six Silicon Valley companies — which have a collective market capitalisation of $4.5 trillion — for their “poor tax conduct.”

It claims that Amazon was the worst out of all the companies allegedly paying just $3.4bn in tax on its income over the last 10 years despite racking up $960.5bn worth of sales and $26.8bn in profit.

“The company is growing its market domination across the globe on the back of revenues that are largely untaxed, and can unfairly undercut local businesses that take a more responsible approach. The situation is unlikely to reverse soon given the $9.3bn of operating loss carry-forwards available to offset against future profits and taxes,” the report said.

Amazon disputed the report and said the “suggestions are wrong,” the company had “a 24% effective tax rate on profits from 2010-2018,” the company’s “profit margins are low,” and that “naturally results in a lower cash tax rate.”

Amazon said in a statement: “Governments write the tax laws and Amazon is doing the very thing they encourage companies to do – paying all taxes due while also investing many billions in creating jobs and infrastructure. Coupled with low margins, this investment will naturally result in a lower cash tax rate.”

The report ranked Facebook in second place, claiming cash tax paid as a percentage of profit was just 10.2% over the period of the study.

It added that the tech firm “has the lowest foreign current tax charge ratio of the Silicon Six over the decade, at just 5% of profits.”

Facebook hit back at the report and said “we take our tax obligations seriously and pay what we owe in every market we operate. In 2018 we paid $3.8bn in corporation tax globally and our effective tax rate over the last five years is more than 20%.

“Under current rules we pay the vast majority of the tax we owe in the US as that is where the bulk of our functions, assets and risks are located. Ultimately these are decisions for governments and we support the OECD process which is looking at new international tax rules for the digital economy.”

Alex Cobham, CEO of Tax Justice Network said in another statement: “This report demonstrates why we need a fundamental reprogramming of the world’s approach to tax, based on a unitary taxation.

“By ensuring multinational corporations pay their fair share locally for the wealth created locally by people’s work – based on an agreed formula and supplemented by a minimum effective tax rate – governments can strengthen their economies to run smoothly and make a good life possible for everyone.”