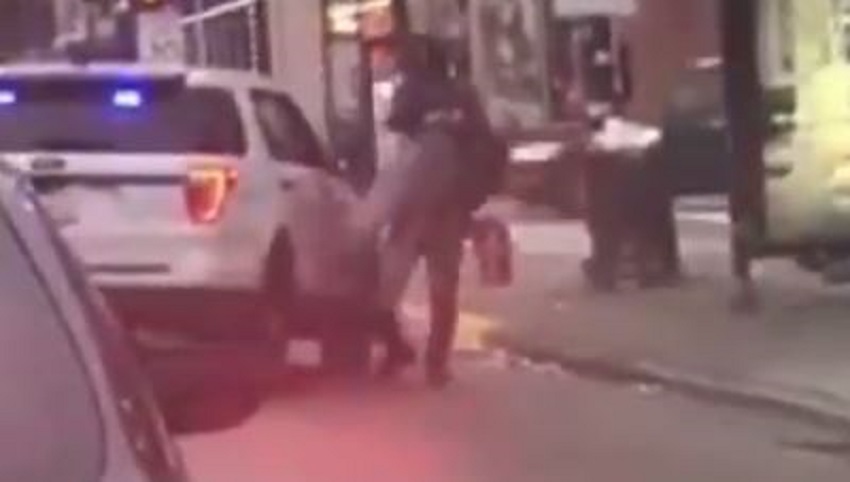 An investigation was underway after a Chicago police officer hurled a man to the ground for allegedly spitting on him during an arrest Thursday afternoon in the Chatham neighborhood on the South Side, authorities said.

The 29-year-old man was allegedly caught drinking alcohol in public about 4 p.m. in the 700 block of East 79th Street and is accused of resisting attempts to be taken into custody by licking an officer’s face, threatening him and spitting in his eye and mouth, according to Chicago police.

A witness said she recorded the next moment, in which the officer body slams the 29-year-old onto the ground, with his head hitting the sidewalk curb in front of the bus stop. Another officer walks over and tries to shake him awake, but he does not stir for the remainder of the 43-second video.

“I was nervous. I was scared. I was hoping this young man was okay,” said Jovonna Jamison, the 22-year-old bystander who recorded the video.

The Civilian Office of Police Accountability was investigating the incident, according to police spokesman Anthony Guglielmi.

“This incident is under investigation as the actions in the video are concerning,” Guglielmi said in a tweet. “Actions depicted on a social media video & complaints of citizens are being taken very seriously.“

Jamison said she was in a vehicle driving south on South Cottage Grove Avenue and was waiting at the red light on East 79th Street. Then she saw an officer snatch a man’s beer away. The man was on the phone when an officer picked him up and slammed him onto the sidewalk curb, she said.

Police said the body slam was “an emergency take down” in response to the spitting.

The 29-year-old was taken to University of Chicago Medical Center and stabilized, but police did not state in what condition. The officer who was spat on, 32, was also taken there for evaluation, the Chicago Fire Department said.

Charges were pending against the 29-year-old, police said.