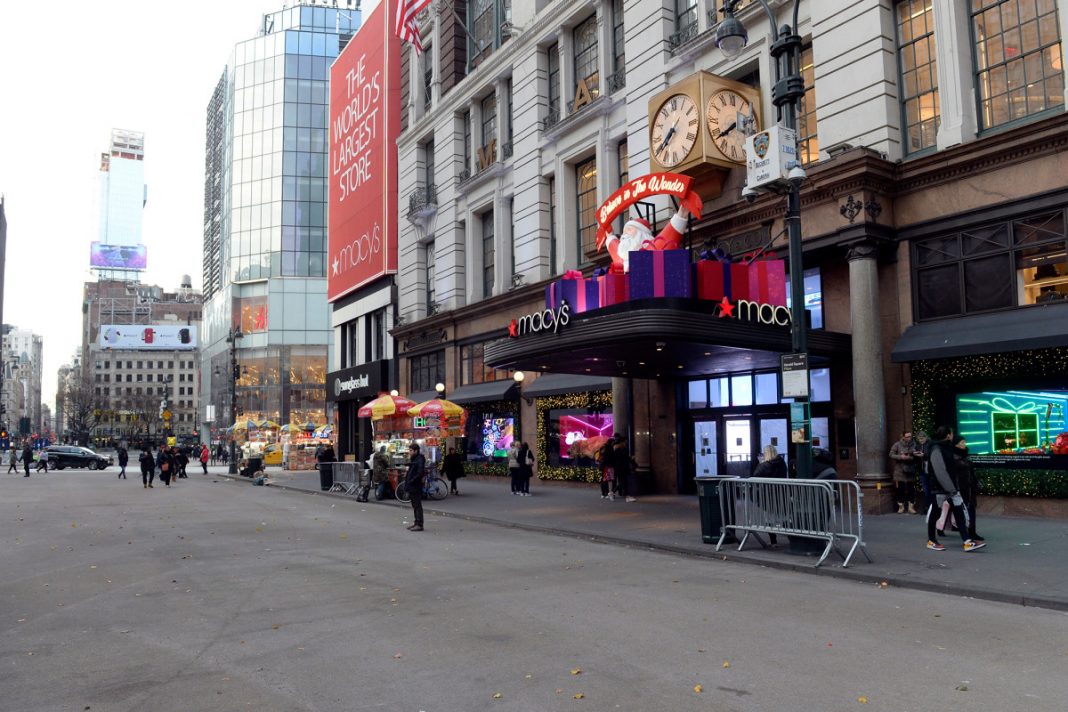 For these shoppers, the web just won’t cut it.

The rise of online retail has eased the Black Friday hoards of yesteryear, but many bargain-seekers still turned out across the Big Apple on Friday to splash some cash in person.

At Macy’s flagship location in Herald Square, one British family said they had come all the way from London specifically to experience the consumer bonanza first-hand.

“We just came out shopping and we’ve spent all our money already!” said Donna Lee, 30. “We got some Christmas presents and we will keep some for ourselves.”

The family of eight women and their kids were weighed down by several bags from Victoria’s Secret.

“We bought so much we have to take it back to the hotel room and drop it off,” added her cousin Kristy Lee, 30. “Then we will come back and shop some more.”

Workers at the emporium said the store’s Thursday opening meant fewer people showed up on Black Friday itself.

“Opening on Thanksgiving is good for us because the Black Friday rush isn’t so crazy,” said Erin McDonnell, 54, a freelancer who works for Ralph Lauren and helps with events at Macy’s counter.

At the Queens Center Mall, Jenny Pascual, 35, arrived at the Pink store with her 14-year-old daughter Emily Huestipac around 6:30 a.m., half an hour before the retailer opened.

She ended up spending $300 and saving $300 in her early-morning shopping spree.

“This is a good sale for me because I have daughters and they wanted sweaters, T-shirts and tights,” Pascual said. “I’m happy I came. It was a real bargain and I got the stuff that I wanted for much less. I always save and wait for today to go shopping.”

Sweaters and leggings at the store were buy one, get one free, while underwear that normally sells for $11 and $12 was on offer at $35 for 10 pairs.

“The extra money that I saved, I am going to use it to pay some bills, like the electric bill,” Pascual said. “And I am going to put some away towards a summer vacation for my family.”

Pascual, of Jamaica, said she didn’t even think of bargain-hunting on Thanksgiving.

“No, it’s a day to spend with my family, not for shopping,” she said. “I wanted that day to be with my family. I still get a good sale today so I don’t have to cut into my family time and all that good food to come out here.”

A JC Penney employee at the mall said many others are opting to shop online instead of hitting the sales racks.

“Most people are doing their shopping online, especially the younger generation,” said the clerk, who declined to give her name. “They don’t want to come in the store. They don’t have to get dressed. They roll over [in bed], get their laptop and start shopping.”

But Victoria James, a tried-and-true online shopper, had ventured out in person for the first time on Black Friday to see what it’s all about.

“I just wanted to see the difference in coming into the store and shopping online,” James said. “And, I needed to take a break and get out of the house for a little while.”

James scored a blouse at Forever 21 — but still wasn’t entirely sold on shopping in stores rather than online.

“I avoid the crowd,” James said. “I avoid the long lines. Sometimes the store might not have what I want. It’s easier online. I can look at a lot of different stores and it’s easier to compare prices … If I don’t see anything I want, I’m going back home to shop online.”