Home Conservative Life For 2020 candidates, eating tacos is the kissing babies of stumping for... 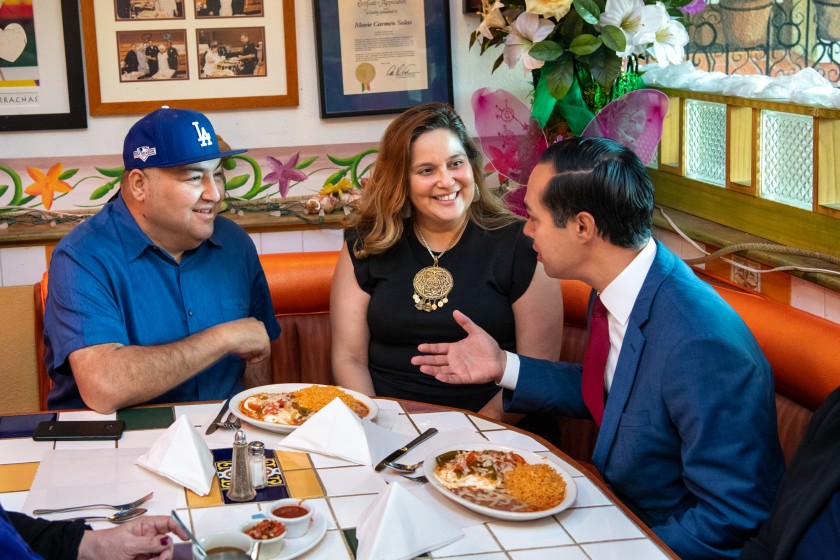 There he was, another candidate with White House dreams, shaking hands and exchanging hugs in a gaudy Mexican restaurant, careful not to stain his suit with salsa.

As Latino outreach goes, Julián Castro’s recent meet-and-greet at La Parrilla in Boyle Heights seemed ripped from the headlines. Because it was.

Hillary Clinton did it when she visited King Taco in 2008 and Joe Biden this May. Al Gore gobbled up red pork tamales at Carrillo’s in San Fernando as part of his presidential run.

And Gerald Ford infamously bit into a tamale still wrapped in its corn husk in front of the Alamo.

Even Donald Trump played the game in 2016, when he tweeted a photo on Cinco de Mayo of himself about to dig into a gargantuan taco salad and declared, “I love Hispanics.”

Presidential candidates showing up at a Mexican joint to cash in on votes by scarfing up enchiladas has become as American as kissing bebés.

It’s like hitting barbecue joints in South Carolina, biting down on cheesesteaks in Philadelphia, devouring pizza and bagels in New York City, eating deep-fried food-on-a-stick at the Iowa State Fair.

On this Sunday morning, Castro eventually sat down to a plate of huevos rancheros, but so many people wanted to chat him up or take selfies that staffers asked for a to-go box after less than five minutes.

After a short stump speech, the candidate returned to what was on everyone’s mind: desayuno.

“Y’all are enticing me with the smell of the Mexican food!” the San Antonio native and former mayor yelled to the roars of the crowd as some urged him to also hit up the legendary Al & Bea’s stand nearby for bean-and-cheese burritos.

“Events like these are just like home,” Castro said while he waited on Cesar E. Chavez Avenue for a ride to a comida-free forum at Cal State Los Angeles. “But the magic is to hear American stories not heard by mainstream media, an America oftentimes made invisible.”

It’s a message that Castro’s rivals have embraced with open arms and hungry stomachs.

Nearly every Democratic candidate in the 2020 presidential race has met voters at Mexican restaurants — and not just in the Southwest.

Andrew Yang held a town hall at a Mexican restaurant in Okatie, S.C. Tulsi Gabbard addressed supporters at Burrito Me in Laconia, N.H., while Elizabeth Warren hit up Dos Amigos down the road in Concord. Castro enjoyed chicken fajitas in Wyoming (verdict: “I can’t say it was as good as Tex-Mex”); Mexican restaurants in the Hawkeye State have hosted everyone from Amy Klobuchar to Kamala Harris and Bernie Sanders.

Pete Buttigieg launched a thousand think pieces when he admitted to spiking salsa with ranch dressing back home in Indiana. Even Joe Sestak, who’s barely reaching zero percent in the latest New York Times poll, dropped by a Mexican eatery in Vinton, Iowa, this summer.

Such gatherings “served a different purpose than formal events,” said 40-year-old Jeannette Soriano of Pico Rivera, who was the last person to take a picture with Castro at La Parilla. “It creates a brief buzz for most Mexican Americans who aren’t plugged into politics.”

The evolution of the phenomenon intrigues Matt Barreto. The UCLA professor of Chicano studies and political science frequently teaches Ford’s tamale snafu to his students as a particularly egregious example of “Hispandering.”

“Most of them have come a long way,” he said. “They have to be serious about doing it. The risk is that it looks like a photo op. Voters want them to come around more regularly.”

But Barreto is also mindful of how such visits speak to the continued mainstreaming of Mexican food and Latino political power.

“These important meetings and events are happening at Mexican places,” he said. “It’s not just Italian restaurants, American diners or steakhouses anymore.”

The earliest known presidential candidate to hold a public appearance at a Mexican restaurant was Henry Wallace. In 1948, Franklin D. Roosevelt’s former vice president spoke before a mixed-race audience at a spot in Dallas as the head of the Progressive Party ticket to decry segregation in the American South.

He launched a love affair between Mexican food and American presidents — and pretenders — that hasn’t ceased.

Lyndon B. Johnson regularly hobnobbed with donors over combo platters at Matt’s El Rancho in Austin, Texas. Richard Nixon regaled reporters at El Adobe de Capistrano before stays at his Western White House in nearby San Clemente; a plaque continues to mark Nixon’s preferred table. Both Bob Dole and Walter Mondale visited Lucy’s El Adobe Cafe in Hollywood in 1976 as the running mates of Ford and Jimmy Carter, respectively.

“I think elected officials and candidates understand that they have to speak to the [Latino] voter bloc,” said Pete Cortez, whose family has run Mi Tierra in San Antonio and has hosted politicians since its 1951 opening. “We’re not going to go to you; you have to go to us. So they’ve identified Mexican restaurants as a place where if you want to talk to people, this is where you have to go.”

Mi Tierra’s walls have photos of Ronald Reagan and George H.W. Bush from their dinners there; Castro has been a regular since he was a child. But it was Bill Clinton’s patronage that turned politicians’ visits to Mexican restaurants from hokey affairs into serious stops.

When he visited on the campaign trail in 1992, Cortez gifted Clinton — who had dined there as far back as 1972, when he was volunteering for George McGovern’s presidential run — with a Mi Tierra T-shirt featuring a portrait of Mexican Revolution icon Emiliano Zapata. Clinton loved the T-shirt so much that he wore it during one of his public jogs; a subsequent photo made the wires, and Mi Tierra immortalized the occasion with a black velvet painting that now has its own alcove in the restaurant.

Political strategists took notice. By 2000, George W. Bush was making headlines for impressing waiters at Mexican restaurants during the Iowa caucuses with his Spanish. Eight years later, Republican and Democratic candidates alike mugged for cameras with margaritas and more from Nevada to Texas to California and beyond.

The appearances are not without risks for the restaurants in these polarized times. In 2012, Rosa Linda’s Mexican Cafe in Denver received death threats after it declined the offer of a visit by Republican nominee Mitt Romney. Four years later, El Sombrero in Las Vegas became the target of a boycott after Trump met with a group of local Latino entrepreneurs there; the restaurant closed in 2018 after 68 years in business for unspecified reasons.

But most restaurateurs welcome presidential visits and promote their brush with history. Moreno’s Restaurant in Orange has a photo on its menu of George H.W. Bush making tortillas when he passed through in 1988. In tiny Woodburn, Ore., the walls of Luis’s Taqueria still feature framed newspaper clippings and photos from when then-candidate Barack Obama dropped by in 2008.

“Customers see it like a good history to read,” said owner Jesus Gonzalez. “And they wonder which restaurant will get the next visit.”

Cortez has seen candidates of all political persuasions stop by since Clinton — who still visits every time he’s in San Antonio — and try to work patrons at Mi Tierra and other Mexican restaurants nationwide. “Some are better than others,” he said. “The ones who interact the most with the customers, and not just the invited guests, are the ones that seem to do the best in their races.”

“Politicians know that they need to seem relatable.” said the editor and publisher of Detroit-based Tostada Magazine. “They know that they have a better shot at winning over those voters in those communities and they want to be sure that they’re seen in the ‘right’ places.”

While no presidential candidate has visited a Mexican restaurant in the Motor City yet, Daniels said local Detroit politicians are beginning to hold fundraisers at them.

“It’s like Latino student groups who have done this forever,” she joked. “Politicians are now like, ‘OK, what taco truck are we going to hire, or who’s going to bring the beans and rice?’”