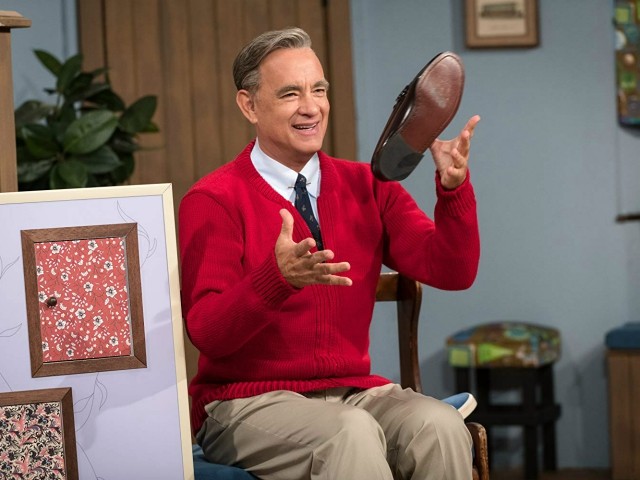 Lloyd Vogel (a superb Matthew Rhys) appears to have it all. He lives in Manhattan as an award-winning writer for Esquire, is married to the beautiful and supportive Andrea (Susan Kelechi Watson), and now he has a son. But there is a cancer metastasizing within him.

For decades, Lloyd’s fooled himself into believing he’s honoring his dead mother by holding on to the rage he feels toward a father who abandoned him as a child. And while this rage might feel like a cocoon, an excuse to keep a narcissistic focus on self and keep everyone at arm’s length, it is really a prison.

In other words, Lloyd is miserable. He just doesn’t know why. He thinks he knows. He’s pretty sure the world is to blame — a world filled with liars and broken families and manipulators and pushy editors and needy wives and fathers who abandon their families and then come back to make amends at the worst possible time. But with a guy like Lloyd it’s always the “worst possible time” to ask something of him. You see, Lloyd’s got this baby now and his reputation as a jaded hatchet man is hurting his career because people won’t talk to him. And now, Lloyd, an important investigative journalist, has just been handed a demeaning assignment to put together 400 words about Mr. Rogers.

What a pain. This means Lloyd has to go all the way to Pittsburgh, where he will only be allowed 20 minutes with the children’s television icon… But Lloyd has an idea… He’s going to write about the real Mr. Rogers. He’s not interested in the goody-goody, too-good-to-be-true television character. Lloyd will rip the mask off. Actually, Lloyd has to rip off the mask. Lloyd’s entire reason for being is to justify holding on to that rage, to his cocoon, and he does this by proving to himself, over and over again, that people are inherently awful.

First there was Once Upon a Time in Hollywood, then Joker, then Ford v. Ferrari, and now A Beautiful Day in the Neighborhood. Four classic crowd-pleasers. When’s the last time that happened over the course of a Hollywood year, much less a few months?

A Beautiful Day has a number of stars, but chief among them is director Marielle Heller, who found the one way to get this story right when there were 99 ways to blow it. I don’t know how she did it, but not for a moment do things become cloying or sentimental or manipulative. In the hands of a lesser director, a sappy score would always be right there to tell us how to feel. This never happens. The moments that move you most, and there are many, aren’t backed by music. If the moments are backed by anything, it is silence, these long pauses where no one says anything and you feel everything.

One of those pauses lasts a full minute with Mr. Rogers (Tom Hanks) looking you  — I mean, the audience — square in the eye, a moment that is as electrifying as it is profound.

Hanks is a marvel. How in the world do you play someone like Fred Rogers without imitating him, without accidentally spoofing him? I still don’t know, but Hanks does it. Mr. Rogers is always Mr. Rogers, is always the quiet, uncommonly decent, caring, and patient man we remember from TV, a guy so easy to lampoon. Still, without the crutch of a mask, without a “That ought to hold the little bastards” Uncle Don moment, Hanks somehow makes Mr. Rogers human and real. It is a stunning performance.

There’s a lovely scene (and this is a movie loaded with lovely scenes) where Lloyd watches Rogers greet his fans with uncommon patience and graciousness.

“I don’t like that word,” she says, explaining that it dismisses the daily effort her husband puts into being good. The word also gives others an excuse not to be as good. You see, Fred’s kindness is no accident. He’s human. He has a temper. But like being a great shortstop, being good requires dedication and training, and part of that training is to read Scripture every morning.

And that’s another thing I love about Beautiful Day. Unlike 42 and Walk the Line and Tolkien, biopics that all but erase the Christianity that in real life defined their primary subjects, that’s not the case here.

Fred Rogers was not only a devoted Christian, he was a Presbyterian minister whose faith in Christ authored everything he did. For decades, on public television, he preached the Gospel without ever mentioning Christ or God, without ever preaching. This does not change the fact of who Fred Rogers was, and to its credit, especially in this day and age, A Beautiful Day does not hide this truth.

Like a child, we see Mr. Rogers pray at his bedside. Any other movie would have played this for laughs. Not this one. The moment is not only taken seriously, it informs the audience that faith matters, that prayer works, that God sometimes works His miracles through the heroism of a mortal man’s selfless decency.

A Beautiful Day is so unlike the usual-usual Hollywood movie that centers on a damaged protagonist. Lloyd’s way home does not come from a narcissistic journey of self-exploration, or learning to accept himself for who he is. A Beautiful Day is not Eat Pray Love or The Bucket List or Wild, is not one of these loathsome stories that present narcissism as a value.

No, A Beautiful Day is about a selfish and angry man who, like most selfish and angry men, are good men shackled by their own pride and ego. Mr. Rogers sees this in Lloyd, and cares enough about someone he has never met to risk a scathing Esquire profile to help this lost man, to teach him about the miracle of God’s grace, the miracle of the words I’m sorry and I forgive you.

If I have one quibble with A Beautiful Day it’s that the death of Lloyd’s father Jerry (Chris Cooper) is a bit of a cop out, makes things a little too easy.

Jerry is not a likable man. He’s boisterous, intrusive, and drinks too much. This is all to the movie’s credit, no question — what I mean is that although he is a changed man, he is still Jerry, he is still the kind of guy who wears purple shirts and talks too loud.

The cop out, at least in my mind, is how easy it is to forgive someone you will not have to deal with for much longer.

Just out of high school, back in the mid-80s, I got a job managing this shitty apartment building in the city, and I got to know one of the tenants, an ex-biker,who had the worst drug problem I have ever seen. The drugs and booze were killing him, not just physically, but spiritually. He’d kicked the habit more times than he could count. But he just kept going back.

Being a teenager without much of a filter, I just came out one day and asked him point blank, “Why don’t you just stop? By the time you get out of prison or rehab, you’re no longer addicted physically. Why do you keep doing this to yourself?”

His response floored me. Obviously, I’m paraphrasing: “Kicking the habit is the easy part. You’re on a mission. You’re focused on a goal. You’re not dealing with real life. It’s after the detox that it gets hard. It’s the tedium and banality and petty stresses of real life that make it hard; the shitty job, the unpaid bills, the car that won’t start, the kids that won’t settle down, the wife who needs this or that. It’s the realization that this is it, that day-in and day-out for years, for decades, forever, this is it, and you have to face it without the escape of a buzz or a high.”

This is also true of forgiveness, and I would have liked to have seen A Beautiful Day explore that. I would have liked to have learned what Mr. Rogers had to say about the burden that comes with forgiving someone who is not dying, of allowing someone back into your life who’s loud and who wears purple shirts, when it means dealing with a Jerry for years, for decades, forever.

But that is a small thing in an otherwise perfect movie.

If you are able to, be sure to watch the Mr. Rogers documentary Won’t You Be My Neighbor? before you see A Beautiful Day. It will only add to an already wonderful experience.

De Blasio ‘Worst Mayor’ in American History, ‘Put out a Prayer,’ Not a Plan on School Opening