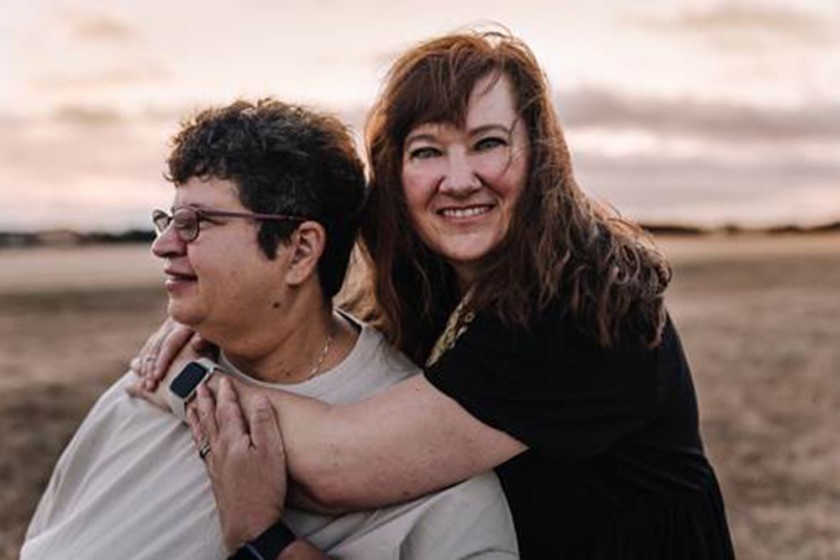 Joanna Maxon, a 53-year-old Christian mother of two, was searching for ways to advance in her career as a supervisor and began looking into graduate schools.

She decided on Fuller Theological Seminary, a religious graduate school based in Pasadena, because it combined things she valued: her faith and her studies. So in 2015, she started taking classes online and at the school’s regional campus in Texas and worked toward a master of arts in theology degree.

Three years into her degree program and just a few classes away from graduating, Maxon received a letter notifying her she had been expelled from the school.

The reason? She is married to a woman.

Now, Maxon, who lives with her wife Tonya Minton in Fort Worth, is suing Fuller, alleging the college violated Title IX rules that forbid educational institutions from discriminating against students on the basis of sex.

Paul Southwick, Maxon’s attorney, alleges the school also violated the Unruh Civil Rights Act and is seeking compensation of at least $500,000 to cover attorney fees and Maxon’s federally funded student loans, according to a lawsuit filed Thursday in a U.S. District Court in Central California.

Southwick said that because Fuller accepted federal aid and had not received a religious exemption, it must adhere to federal laws, including Title IX.

“Mrs. Maxon is a Christian woman who took her studies seriously,” the lawsuit states. “She worked diligently on the courses in her program. Her peers and professors respected and admired her. She deserved more than a cold letter dismissing her.”

On its website, the Fuller Theological Seminary states: “With a seminary community that comes from hundreds of traditions and backgrounds, we listen, wrestle, dialogue, and come away strong.” Its Title IX and community guidelines are also listed on the website.

Maxon’s background, however, was apparently not acceptable to an employee in the school’s financial aid department, who noticed on Maxon’s tax filings that she was married to a woman and alerted school officials, according to the lawsuit.

Partway into her studies at Fuller, Maxon and her husband divorced and she began a relationship with a woman. After same-sex marriage was legalized in the U.S., the two married in 2016.

The campus’ Title IX coordinator, Nicole Boymook, notified Maxon she was being investigated after the marriage was brought to school administrators’ attention and said she could respond by writing a letter to the dean, according to the lawsuit.

In her letter, Maxon explained her relationship, saying she had made a “financial, emotional and legal commitment to the person I love,” and said she’d like to discuss her case over coffee.

Dean Marianne Meye Thompson responded to her letter on Oct. 9, 2018: “Whenever violations of our sexual standards are brought to Fuller’s leadership’s attention, we address them as dictated by our policies and procedures. I am instructing the registrar to dismiss you from the seminary, effective immediately.”

Maxon’s expulsion came as a surprise, Southwick said. While there may have been bumps in the road for other LGBTQ students attending Christian schools, Maxon said she had received only love from Fuller, her attorney said. According to the lawsuit, Maxon spoke openly about her marriage and her family and felt supported by classmates and professors.

The Fuller Theological Seminary doesn’t prohibit same-sex relationships or require students to adhere to a statement of faith, like other Christian schools in California. Around the same time that Maxon was expelled, Azusa Pacific University students were incensed when the university announced it had reinstated a ban on same-sex relationships after quietly removing the prohibition from its policies.

For Maxon, the love and support from her peers gave her a false sense of safety, Southwick said.

Though the college does allow same-sex relationships, it does not allow “homosexual forms of explicit sexual conduct” and has made clear that it believes sexual intimacy is reserved for a marriage between a man and a woman, Southwick said.

According to the lawsuit, at no point in Maxon’s time at Fuller did administrators ask whether she engaged in “homosexual forms of explicit sexual conduct.”

The dean didn’t explain why the school had expelled her, the lawsuit says. Maxon and Southwick tried to settle the issue with the seminary for several months before the lawsuit was filed, but they couldn’t come to an agreement, the attorney said.

“I didn’t expect them to expel me,” Maxon told The Times. “It was almost a surreal experience. I couldn’t even talk about it for months. I really felt like I lost a connection to a community that supported me.”

Representatives for Fuller Theological Seminary did not immediately respond to requests for comment.

Southwick said he thought this was the first lawsuit filed against a college accused of expelling a student because of a same-sex relationship — but it’s not the first time someone has been kicked out of school for that reason.

The lawyer said he hopes the suit will help change discriminatory policies so more LGBTQ individuals can pursue an education at Christian schools.

“It wasn’t just about money,” Southwick said. “It was about Fuller’s treating [LGBTQ students] with transparency. What’s happening with Joanna is going to keep happening more and more. Policies at these institutions have a real impact on people.”