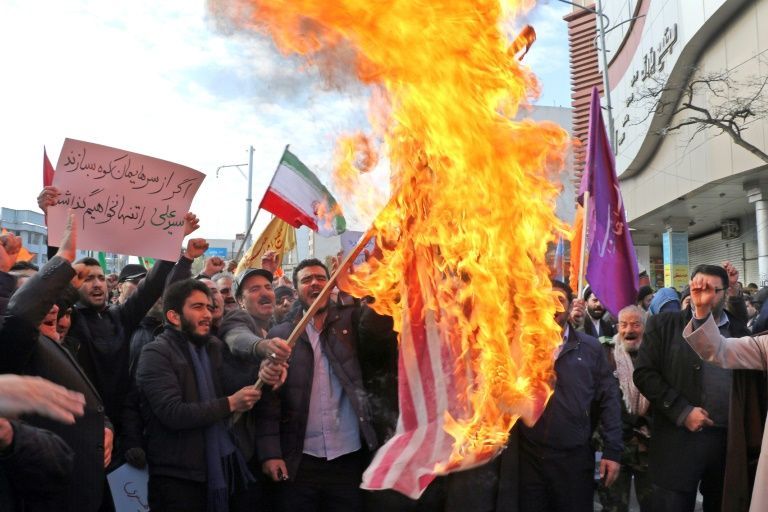 The protests erupted across the sanctions-hit country on November 15, after the price of petrol was raised by as much as 200 percent.

Authorities said they had arrested about 100 leaders of the protests in which police stations were attacked, petrol pumps torched and shops looted.

“A full-fledged world war against the system and the revolution was born and fortunately the child died at the moment of birth,” said Brigadier General Salar Abnoosh, a deputy head of the Islamic volunteer militia.

Quoted by semi-official news agency ISNA late Thursday, Abnoosh said interrogations had revealed a “coalition of evil” of “Zionists, America and Saudi Arabia” was behind the “sedition”.

Officials have confirmed five deaths, while Amnesty International said more than 100 demonstrators were believed to have been killed and the real toll could be as high as 200.

Iran’s Revolutionary Guards said that during the unrest, “incidents… caused by the rise in petrol price” took place in just under a 100 cities.

The Guards had arrested “about 100 of leaders and main elements of the recent unrest,” judiciary spokesman Gholamhossein Esmaili told state TV.

He added that a “significantly larger number” had been identified by the intelligence ministry and would soon be detained.

The Internet remained mostly blocked in Iran on Friday for a sixth day.

Iran’s telecommunications minister told ISNA connectivity had returned in some provinces but did not give a date for full coverage.

“Other places will also be reconnected” on the orders of the Supreme National Security Council, said Mohammad-Javad Azari Jahromi.

But US Treasury Secretary Steven Mnuchin said Washington was slapping punitive sanctions on Jahromi “for restricting internet access, including to popular messaging applications”.

“Iran’s leaders know that a free and open internet exposes their illegitimacy, so they seek to censor internet access to quell anti-regime protests,” Mnuchin said.

NetBlocks, a website that monitors net shutdowns, showed Iran’s connectivity to be at only 14 percent by mid-Friday.

The spokesman for Iran’s Assembly of Experts called on authorities to keep “foreign networks” blocked after reconnection, saying they were “teaching people to riot, to commit crimes”.

“If you are going to open it, I ask you to not fully open it,” Ayatollah Ahmad Khatami said in a Friday prayer sermon broadcast live.

The Assembly of vetted clerics oversees the work of Iran’s supreme leader and has the authority to dismiss him.

Iran has filed a complaint to British authorities over “the conduct of Hostile Farsi (media) networks such as BBC Farsi, Iran International and Manoto” based in London, its ambassador to the UK said.

Their reporting amounted to “biased distortion of the recent events in Iran and calling for widespread violence against Iranian civil institutions” Hamid Baeidinejad tweeted.

Britain’s broadcasting watchdog Ofcom said it was considering a complaint against Iran International and Manoto, but that BBC Persian did not fall under its jurisdiction.

Khatami has accused foreign powers of stoking the unrest, singling out Washington “as the leader of the wickedness”.

The US “confessed to it, and unfortunately France and Germany went along too”, he said.

Khatami said “the black regime of Saudi Arabia… also helped both with money and by providing media” coverage. He urged the Saudi people to “rise up” and no longer be “lackeys” of the US and Israel.

US President Donald Trump has accused Iran of blocking the internet to cover up “death and tragedy”.

His Secretary of State Mike Pompeo vowed to “expose and sanction the abuses” against protesters.

But Tehran accused the EU of interference and asked it “to explain why it doesn’t keep its promises” to help bypass US sanctions that have plunged Iran’s economy into recession.

Washington last year withdrew from the 2015 nuclear deal between Tehran and world powers and reimposed the sanctions on Iran, including vital sectors such as oil, banking and tech.