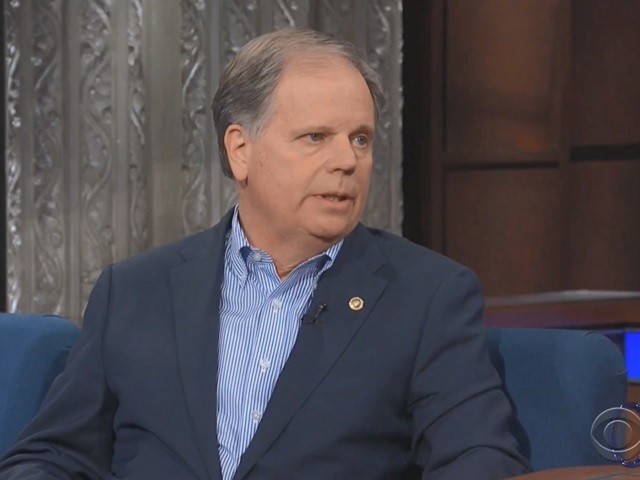 Senator Doug Jones (D-AL) vows to keep an open mind should impeachment make its way to the Senate from the House of Representatives.

Jones, who faces reelection next year, revealed early preparations were underway in the Senate in the event of articles of impeachment were passed during an interview that aired on Huntsville, AL radio WVNN’s “The Jeff Poor Show.”

“I don’t know whether or not something will come over to the Senate from the House,” Jones said. “If it does, it is probably going to be at the end of the year, first of next year. We’re trying to keep a view of the top lines, trying to read what’s going on over there in hopes they do a full and fair proceeding over there.  I will tell you there is beginning to have talk in the Senate about potential rules of procedure and things like that and how a trial over here might progress.”

“Those are really in early stages, and we’re looking back in history to see what’s been done in the past, to see how we can do this to make sure that any trial that comes over here is a fair trial,” he continued. “It gives the president an opportunity to defend if there are charges leveled, as well as the House managers the opportunity to present a case to see whether or not the dots can be connected.”

Jones warned against revealing the identity of the so-called whistleblower that is believed to have triggered the impeachment inquiry underway in the House Intelligence Committee. He said such a move would violate precedent and could endanger the individual.

“And it is the House’s job in their investigation and ultimately over in the Senate, if it comes this way to see if the dots were connected and if they are, they’ll take appropriate reaction,” Jones continued. “If the dots aren’t connected, or they don’t rise in a certain way, then they’ll take appropriate action that way. The whistleblower — this is a red-herring, and I’m very concerned because I’ve got to be honest with you, I’ve seen so many things. People’s lives could be in jeopardy in this day and age. It has gotten so ugly out there with some things. I worry about that.”

“We’ll wait and see what happens,” he added. “I’m keeping up with it, keeping an absolute open mind to follow my oath in the Constitution. One thing I’ll mention, and your folks may not know this — if a trial comes over here, Senators, you know we take an oath of office when we come in here to support and defend the Constitution. But if there’s a trial, we also take a separate oath. The Chief Justice of the United States will give us an oath to do fair and impartial justice according to the laws and the Constitution. I take that really serious, and we’re going to keep an open mind to do as much as we can, learn as much as we can so I can make a judgment if and when I’m called on to do so.”

Killer coronavirus attacks the body with pneumonia – symptoms to look...