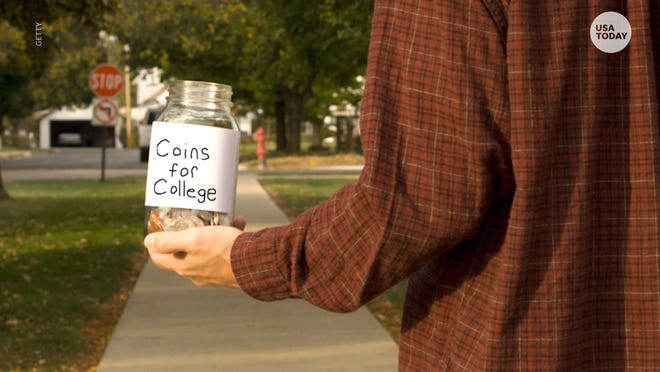 If there’s one thing more frustrating than trying to get into the right college, it might be paying for the degree. That’s what thousands of parents discover daily while discussing how to foot the bill.

Others are proposing more drastic measures.

For example, if a student gets married, they’re legally considered independent from their parents and may be eligible for more aid. So why not marry the kids off?

Some parents suggest moving money around – perhaps, for instance, moving savings out of a student’s name and to a sibling’s account.

Some parents lay out divorce as an option. That way only one parent’s income is considered in the government’s calculation of the family’s eligibility for scholarships and loans. Debbie Schwartz, the founder of the Facebook group “Paying for College 101” said she has often seen parents jokingly suggest a legal separation.

“‘I’m happily married, but if my husband and I actually got divorced, I’d be in a better situation.’ They’re kind of saying it like that,” Schwartz said.

College has never been more expensive, and students are graduating with more debt than ever. This leads some to extreme measures to reduce costs, as was the case in Illinois. An investigation by ProPublica Illinois and the Wall Street Journal in July found some families were giving up legal custody of their children, thereby making them eligible for financial aid that would be normally reserved for needy families. The University of Illinois referred the cases to the U.S. Department of Education and rescinded the scholarship money it had provided to the students.

Schwartz, a parent who herself has had to navigate paying for children’s college costs, said she doesn’t endorse what the parents in that situation did. But she did say a little piece of her did “understand the frustration that might have led to it.”

This type of financial maneuvering is an extreme example of what some parents consider online in groups like Schwartz’s, but the goals are roughly the same. In the same way people plan for retirement or try to lower their tax bill, parents often talk about how to decrease the amount they’re expected to pay toward a students’ college expenses. That figure isknown as the “expected family contribution,” and it comes from the government’s Free Application for Federal Student Aid –the FAFSA form students fill out to get financial aid.

In a perfect world, families would pay the EFC, and the college and the government would take care of the remaining costs. But it doesn’t work like that in practice.

Parents often struggle to cover the amount the government says they can afford to pay. Even those with an expected family contribution of zero may end up paying for college. Students may have living costs not covered by the college, or their financial aid package may still include federal loans that will have to be repaid later.

Unpaid loans:How a $1,250 student loan can become thousands more and land you in federal court

In many cases, families will pay far more than their expected contribution. Depending on the scholarships a student receives, they also could pay less. And the cost of college isn’t just tuition, plus room and board. Families must pay, or take out loans, for other living costs that include a new computer for classes, a warm coat for winter or even unexpected doctor appointments.

The federal government derives the figure for the EFC after families plug their wages, assets and other indicators of wealth into the FAFSA. Most universities require students and their families to fill out that form if they want to receive financial aid in the form of grants or scholarships.

The government also requires a FAFSA from anyone seeking to take out federal loans to help finance their education. The window for filling out the FAFSA, as it’s more commonly known, opened in October for the 2020-21 school year. The federal deadline is June 30, 2020, though states have different deadlines.

Conceptually, the FAFSA makes sense. Schools and the federal government need some tool to figure out what families and students are capable of paying for their education.

In practice, the FAFSA is long, complicated and opaque.  Sen. Lamar Alexander, a Republican from Tennessee and chair of the committee that oversees education, has highlighted that FAFSA’s obtuseness by unfurling a printed out version of the document. He has proposed legislation that would make filing it simpler.

Parents are often baffled by what they say the federal government expects them to pay for their child’s education.

Donya McCrea’s daughter, Brianna, started at the University of Louisville this fall. McCrea had been working part time at a Bed, Bath and Beyond, but she recently went back on disability. And her husband recently lost his job. The family rents a home and had little savings for Brianna’s college tuition.

Somehow, the expected contribution for Brianna’s first year was $6,700, but it has more than doubled for next year, to $16,000.

This year, they were lucky. Brianna received several scholarships that helped to cover the cost of her college attendance, but McCrea saysshe is not sure what they’ll do next year. She and her husband also must cover medical costs for Brianna, who has diabetes, and the family has another daughter in high school who plans to go to college.

What about loan forgiveness? Betsy DeVos’ rule change means students will have to fight for it

Many parents expressed similar bafflement toward how the federal government expected them to pay tens of thousands of dollars while still covering other living costs. Others pointed out they had to pay even more than what their EFC suggested.

“The EFC is a tool for the colleges to look at and means nothing to you,” one parent wrote on the “Paying for College 101” Facebook group.

An unclear estimate of what a family can afford makes it difficult to plan for a student’s education. It may mean a student goes to a less-expensive college, one that may have fewer resources to help students academically. They could opt out of attending college altogether, or they might turn to even more loans to finance their education, said David Sheridan, a longtime college financial adviser. Parents couldalso end up taking out federal loans to help finance their student’s education.

‘Rip-off’:What you should know about Parent PLUS Loans

How colleges use the EFC

Colleges approach the EFC two ways: First, they view it as tool with numbers they can interpret however they want, perhaps for offering their own income-based financial aid program. Second, they view it as a signal of a family’s net worth – but one that often must be verified, as the idea of massaging the numbers on a FAFSA gains steam.

To stop cheaters, some colleges do try to verify information about the family’s financial situation. That’s where the Google Earth check comes in, said David Feldman, a professor of economics who studies higher education at The College of William & Mary. Staff may actually check a student’s address. If a student’s family has a low EFC but a massive house, that could prompt a college to withhold its own funds.

At the University of Illinois, where families were giving up legal custody of their children to save on tuition bills, administrators couldn’t change how much federal or state money students in the scheme received. But university officials could withhold the institution’s own financing once they found out students had access to more wealth than their federal information might have suggested.

The federal government may also request additional documentation from families through a process called verification.

Colleges may go beyond the EFC by creating their own scholarship criteria.

Many public flagships offer scholarships geared toward families that could be considered middle-income. The University of Michigan, for example, offers free tuition to families earning less than $65,000 and some form of support to those earning up to $180,000. Private universities like Harvard promise to cover all of students’ need, although they usually use FAFSA to determine that figure.

Johns Hopkins University made news when Michael Bloomberg donated $1.8 billion to the school so its students would no longer need loans to fund their education.

The schools that offer significantly more financial aid, Feldman said, will often ask their students to fill out the CSS Profile – essentially FAFSA on steroids, run by the College Board, the same company that administers the SAT. Only about 400 colleges rely on this form, and unlike the FAFSA, students must pay to send their results to the schools. Fee waivers are available to some students.

The reality is, however, that most schools lack the resources to cover all students’ cost of attending college. So one of the solutions is to be transparent about the actual cost of college, said Sara Goldrick-Rab, a professor of higher education at Temple University.

Many students pay less than the sticker price colleges advertise for tuition and room and board. That figure is called the net price, and it’s what the families pay after financial aid and other rewards.

Goldrick-Rab says even that figure can be misleading. Her lab, The Hope Center, is currently working on a project to help six colleges in Texas come up with ways to better communicate what students might actually expect to pay.

Colleges, she said, may be wary of transparency for fear of scaring off students with high prices or wanting to avoid blame for the rising costs. But public schools can’t control some costs, such as housing. And it’s when students struggle with unexpected costs, Goldrick-Rab said, that they struggle to finish school.

Her suggestion is to bypass the expected family contribution and just tell students: “The price is going to be higher,” and help them get ready for it.

To get a better sense of what college may actually cost for their students, parents should contact the university’s financial aid department. The federal government also requires colleges to have net price calculators. You can find your school’s calculator here.