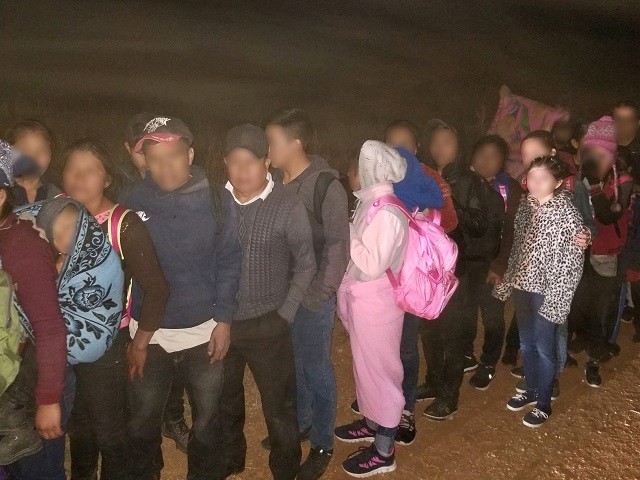 Tucson Sector Border Patrol agents apprehended more than 200 migrants who crossed the border illegally from Mexico during a five-hour period Saturday night. The apprehensions come as cartel-connected human smugglers continue to utilize the tactic of crossing large groups to tie-up Border Patrol agents in the area.

During a five-hour period on November 16, Tucson Sector Border Patrol agents arrested five separate groups of migrants being pushed across the border in large numbers by human smugglers near Sasabe, Arizona. The largest group consisted of 129 illegal immigrants, officials stated.

“The groups recently apprehended near Sasabe are consistent with current Tucson Sector trends,” Tucson Sector officials said in a written statement. “Groups of family units have shifted from entering west of Lukeville to now surrendering in the Sasabe area. ”

Tucson Sector officials said the human smugglers exploit the migrants by pushing them into the remote and dangerous areas of the Arizona border.

“Human smugglers often use family unit groups as cover for other illicit smuggling activities,” the officials wrote. “Tucson Sector Border Patrol agents operate in a challenging environment that requires agents to work in both a humanitarian and law enforcement capacity countering the activity of human smugglers that are exploiting people along the border.”

Of the 63,490 migrants apprehended by Tucson Sector agents during all of Fiscal Year 2019, which ended on October 30, more than 16,000 were family units and more than 5,000 were unaccompanied minors, according to the year-end Southwest Border Migration Report.