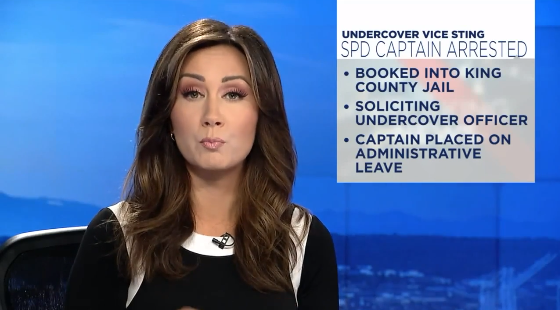 A Seattle Police Department captain was arrested early Thursday morning on suspicion of sexual exploitation and has been placed on administrative leave, court records and the police department confirmed.

Randal Woolery was booked shortly after midnight and released less than 30 minutes later, according to King County Jail records.

“The employee was booked into King County Jail with a request for misdemeanor charges, and the information was forwarded to the Office of Police Accountability,” the statement said. “The employee, a 31-year veteran assigned to the Professional Standards Bureau, has been placed on administrative leave.”

No complaint was immediately filed by the Seattle City Attorney’s Office, according to Seattle Municipal Court records, and he has not been charged.

The case is with the office’s review and filing unit, said Dan Nolte, spokesman for City Attorney Pete Holmes.

Woolery could not be immediately reached for comment. According to public documents and Seattle Times archives, Woolery has worked as an internal affairs investigator and most recently was captain of the police department’s Force Review Unit. That unit oversees the internal review process of officers’ use of force, documents and tracks use-of-force reports, prepares for and staffs Force Review Boards, and disseminates “lessons learned” from use-of-force incidents to the rest of the department.

Sexual exploitation is the term the city of Seattle has adopted for the misdemeanor crime that’s known as patronizing a prostitute in other Washington jurisdictions.