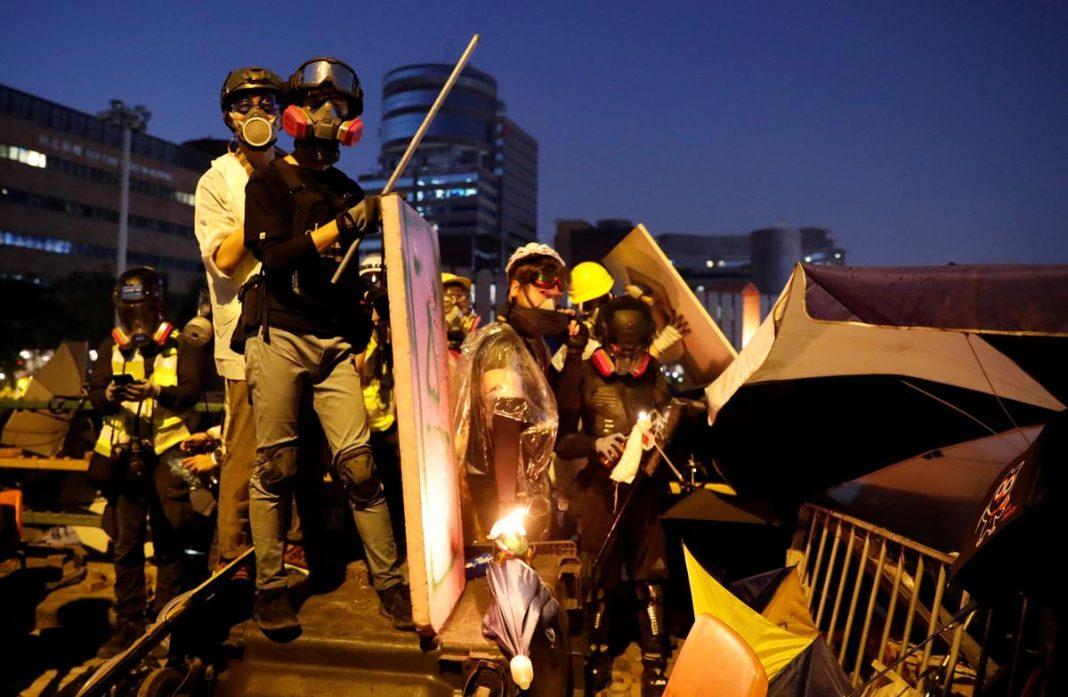 HONG KONG (Reuters) – Hong Kong protesters shot bows and arrows and hurled petrol bombs from a barricaded university on Sunday and police fired volleys of tear gas and blue liquid from water cannon as unrest spread across the Kowloon peninsula.

Several protesters fired arrows from rooftops at the Hong Kong Polytechnic University amid some of the most dramatic scenes in over five months of anti-government demonstrations in the Chinese-ruled city.

Police said a media liaison officer was hit in the leg by an arrow. He was taken to hospital for treatment. A metal ball bit another officer in the visor, but he was not wounded.

Protesters sprayed with the blue liquid stripped down to their underwear and hosed one another down to wash it off, not knowing what it contained.

Police also fired tear gas to try to break up protesters on the artery of Nathan Road in the central Kowloon district of Mong Kok, which is strewn with loose bricks, and to the south in Yau Ma Tei, where successive volleys of tear gas cleared the streets. There were also clashes in East Kowloon.

Huge fires had lit up the sky at the university in the heart of Kowloon district overnight as protesters hurled petrol bombs, some by catapult, and police fired volleys of tear gas to draw them on to the open podium of the red-brick campus.

“Rioters continue to launch hard objects and petrol bombs with large catapults at police officers,” police said in a statement. “The shooting range of such large catapults can reach up to 40 meters … Police warn that the violent activities in the Hong Kong Polytechnic University have escalated to rioting.”

In the university courtyard, civil engineer Joris, 23, said those shooting arrows were protecting themselves.

“The police violence has been over the top,” he told Reuters. “The protesters have been reacting to the police. We haven’t fought back as much as we could. I would be prepared for jail. We are fighting for Hong Kong.”

The clashes spread into Sunday evening, with protesters greeting each water cannon charge with petrol bombs.

The campus is the last of five universities to remain occupied, with activists using it as a base to block the Cross-Harbour tunnel.

Police were trying to clear the bridge above the tunnel, where protesters took cover behind umbrellas and set fire to debris, in turn setting off a series of small explosions, forcing many to flee. The fire brigade moved in after about half an hour to douse the flames.

A police truck was forced to retreat in reverse after being hit by a petrol bomb.

Reuters correspondents heard a high-pitched wailing coming from at least one police vehicle, suggesting a new tactic to try to clear the crowds. Police confirmed use of a “Long Range Acoustic Device”.

Chinese soldiers in a base close to the university were seen monitoring developments with binoculars, some dressed in riot gear with canisters on their chests.

Chinese soldiers dressed in shorts and T-shirts, some carrying red plastic buckets or brooms, emerged from their barracks on Saturday in a rare public appearance to help residents clear debris blocking key roads.

Parts of the Hong Kong Polytechnic University campus looked more like a fortress with barricades and black-clad protesters manning the ramparts with improvised weapons-like bricks, crates of fire bombs, and bows and arrows at the ready.

“We are not afraid,” said a year-three student Ah Long, who chose not to disclose his full name. “If we don’t persist, we will fail. So why not (go) all in,” he said.

The presence of China’s People’s Liberation Army (PLA) soldiers on the streets, even to help clean up, could stoke further controversy over Hong Kong’s autonomous status at a time many fear Beijing is tightening its grip on the city.

The protesters are angry at perceived Communist Party meddling in the former British colony, which was guaranteed its freedoms when it returned to Chinese rule in 1997.

Beijing denies interfering and has blamed the unrest on foreign influences.

Clashes have become increasingly violent, posing the gravest popular challenge to Chinese President Xi Jinping since he came to power in 2012.

Xi has said he is confident the Hong Kong government can resolve the crisis. Chinese troops have appeared on Hong Kong’s streets only once since 1997, to help clear up after a typhoon last year.