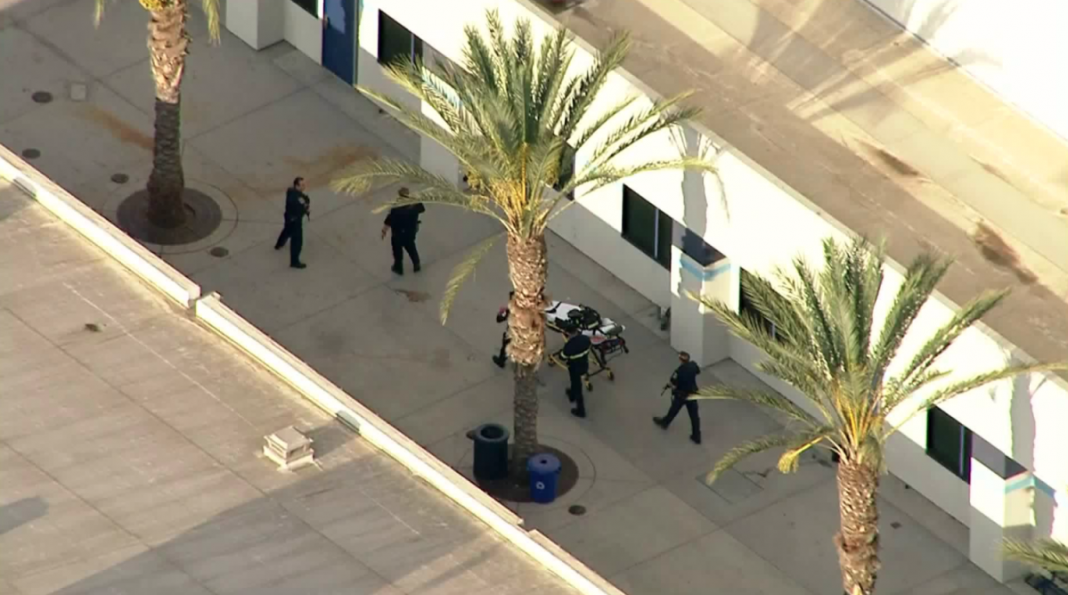 A suspect has been apprehended after a deadly active shooting situation at Saugus High School in Santa Clarita prompted the temporary lockdown of two entire school districts on Thursday morning, authorities said.

The incident began around 7:30 a.m. when deputies responded to a report of shots fired on the campus, located at 21900 Centurion Way, the Santa Clarita Sheriff’s Station said in a series of tweets.

Several students were injured and transported to local hospital, where one female later died, according to officials. She has not been identified.

Two male students are in critical condition at Henry Mayo Hospital, while a fourth patient was hospitalized in good condition.

Previous reports of the number of victims from the shooting ranged from four to seven amid the fluid situation. At least three of the victims were treated on the campus, Sky5 video showed. Paramedics could be seen performing CPR on one injured person.

The shooting triggered a massive police response and a shelter in place area as law enforcement combed the area for the gunman.

By 9:40 a.m., the male suspect was in custody and transported to a local hospital for treatment, Sheriff Alex Villanueva confirmed.

Earlier, the sheriff told KTLA that the department had identified the suspect, saying he appeared to be a student. He did not release the student’s name.

A SWAT team unit and several other vehicles could be seen parked outside a home in a nearby residential neighborhood shortly after 9 a.m., Sky5 video over the scene showed. It was unclear if that was where law enforcement found the suspect.

Meanwhile, students described a chaotic scene when the gunfire erupted on the campus. An 11th grader told KTLA she was outside of the library with friends when they heard five or six gunshots ring out.

“I heard a bullet hit the wall right next to where we were standing … we ran as fast as we could, said the student, who identified herself as Riley. “There were hundreds of us just running as far away as possible,” she said.

Braden, a 10th grader, told KTLA the situation unfolded right after his mother dropped him off at school.

“As soon as I found out, I saw the kids running,” he said. “I knew it was serious so I just ran back to my mom’s car.”

All campuses in the William S. Hart Union High School District were placed on lockdown amid the search for the gunman. By 9:15 a.m., the lockdown had been lifted for most schools except Saugus and Arroyo Seco Junior High School.

The Castaic Union School District also placed all of its campuses on lockdown as a precautionary measure.

Check back for updates on this developing story.