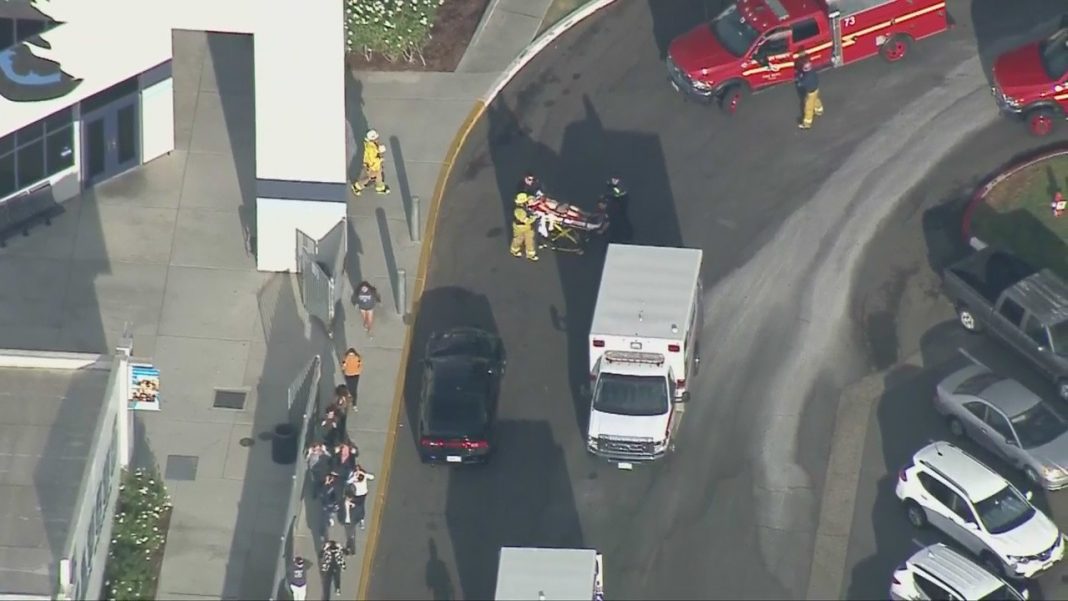 Facebook
Twitter
Google+
Pinterest
WhatsApp
SANTA CLARITA (CBSLA) – At least five people have been wounded in a shooting at Saugus High School in Santa Clarita Thursday morning. The suspect has been captured.

The shooting occurred before 7:30 a.m. at the school located at 21900 Centurion Way.

Five people suffered gunshot wounds, Los Angeles County Sheriff’s Deputy Eric Ortiz told CBS2. Henry Mayo Hospital reported that it was treating four patients: three males and one female. Three of them were in critical condition and the fourth was in good condition.

One of the victims was found wounded in the school choir room, the L.A. County Fire Department reported.

Authorities were searching for a male Asian suspect in black clothing. It’s unclear if he was a student. The suspect was still at large as of 9:30 a.m. He was last seen running west towards Highlands Elementary School, Ortiz said.

“He is not in the school, but he’s in the general area of the high school,” Ortiz said. Anyone who lives in the area of the school was being asked to lock their doors and stay inside.

Several surrounding roads, including Bouquet Canyon Road, were shut down. A multi-block search perimeter was set up and the public was asked to stay away.

Classes had not gotten underway when the shooting occurred, so the campus was not completely full.

“My daughter’s still in the band room, they’ve got a policeman with them,” parent Brian Skiba told CBS2 by phone. “They’re still in lockdown. They’re only clearing it classroom by classroom.”

“She heard the shots as well, she was in the quad where it started, and ran to the band room and locked the door behind her and told everybody to get down,” Skiba disclosed.

Lisa told CBS2 that her son was on his way to school when the shooting occurred.

“He was walking to school about 7:30…He called me and said that his friends called him and told him not to come to school because he heard gunshots,” she said.

Saugus High and all other schools in the William S. Hart Union High School District were placed on lockdown. The district has about 20,000 students. By 9:15 a.m., however, all lock downs had been lifted except for Saugus High and Arroyo Seco Junior High.

If you live in neighborhood s anywhere near Saugus High, PLEASE LOCK DOORS and stay inside. If you see suspect, male dark clothing, in backyards, etc. CALL 911

ALERT: PLEASE AVOID THE AREA OF SAUGUS HIGH SCHOOL ON BOUQUET CANYON ROAD. A POSSIBLE SHOOTING HAS BEEN REPORTED AND EMERGENCY UNITS ARE RESPONDING. pic.twitter.com/uljpLjAyNZ