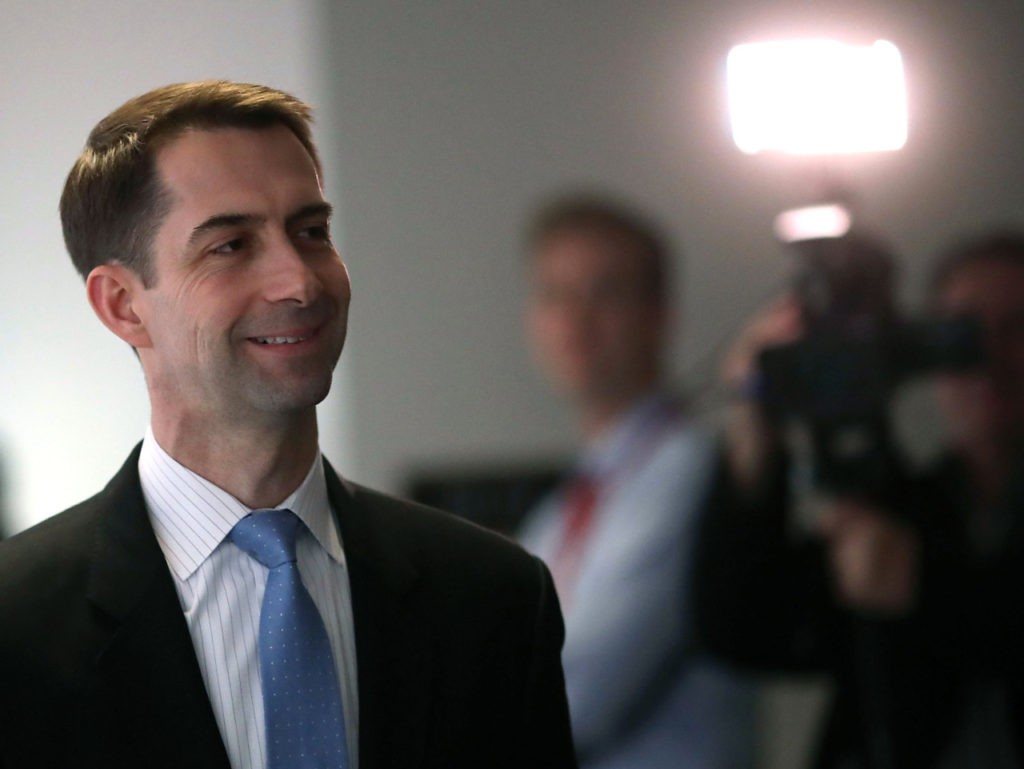 Sen. Tom Cotton (R-AR) is all but certain to win reelection now, as he is running unopposed and the filing deadline has passed in Arkansas.

The backstory behind how Cotton wiped out the only person who filed against him, a backbencher Democrat who announced he was running next year back in May, at just the right time to essentially ensure that he will be reelected unopposed is perhaps one of the most interesting feats in modern politics.

Joshua Mahony, a Democrat and self-described-though-unconfirmed small business owner, had announced  in May he was running against Cotton for the U.S. Senate in 2020. Arkansas has become a deep-red state since the days Democrat Bill Clinton was governor, and its last statewide elected Democrat in a long time, now former Sen. Mark Pryor (D-AR), went down in 2014 to Cotton in what many expected to be a close race but was really a blowout. Republicans have solidified control in the deep-southern state, but nonetheless a freshman senator seeking a second term usually warrants at least some kind of semi-serious challenge from the opposing party.

Democrats failed to recruit anyone but Mahony, making him their horse to ride for 2020—but then Tuesday’s noon local time filing deadline in the state rolled around and Cotton’s team moved in for a quick kill of Mahony’s nascent campaign before it even got off the starting block and after Democrats could no longer legally field anyone else to run against Cotton.

As soon as the noon deadline arrived and nobody else jumped into the race to challenge Cotton, sources familiar with the matter tell Breitbart News, the Arkansas Senator’s team jumped into action. They called local media with dirt on Mahony, centered around inaccuracies he made in filing his candidacy paperwork with the Federal Election Commission (FEC).

Within minutes, Mahony was bombarded with local news requests about puffery of his background in official forms. All this happened within minutes of the filing deadline passing.

Then, around 1:00 p.m. local time—an hour after the filing deadline so Democrats could do nothing to get someone new into the race, and with Mahony under fire throughout Arkansas from the media—the Arkansas GOP dropped a hammer on him: The state party filed an official FEC complaint against Mahony.

The Arkansas GOP announced in a press release:

Today, the Republican Party of Arkansas called on the Federal Election Commission (FEC) to investigate repeated campaign finance misstatements by Democrat Joshua Mahony and his campaign for the United States Senate. Spokesman Stephen Houserman will be submitting the formal compliant with the FEC in the coming days. Democrat Joshua Mahony likes to tell Arkansans that he is a ‘small business owner’ or that he is ‘in the energy business,’ but, as reported by the Democrat Gazette in September, Mahony owns no small business and can’t remember the last time he was employed.

Democrat Senate candidate Josh Mahony has a lot of problems, like being unable to remember the last time he was employed, but lying on a federal form is really egregious. READ MORE https://t.co/aXG1EICqYT #arpx #arnews

The press release then quotes a brutal section of a September piece on Mahony in the Arkansas Democrat Gazette, which ripped into the Democrat’s background.

“The Democrat-Gazette was unable to determine the last time Mahony has held full-time paid employment,” the newspaper wrote. “In Wednesday’s interview, Mahony couldn’t provide the year.”

The newspaper article then quoted Mahony himself saying, “I’m not certain” the last time he was employed full-time.

“I’d have to go back and look,” Mahony said. “Frankly, I haven’t put a lot of thought into that.

Seconds after the Arkansas GOP’s FEC complaint hit Twitter, the National Republican Senatorial Committee (NRSC) followed up with a vicious hit on how Mahony backs the highly unpopular “Green New Deal” conceived by socialist Rep. Alexandria Ocasio-Cortez (D-NY) and her “Squad” of socialists.

.@TomCottonAR‘s Democrat opponent can’t remember the last time he was employed, lost his last race by 32 points, and supports the Green New Deal.

Congratulations to Senator Cotton on getting six more years to serve Arkansans! https://t.co/cobLmL1z2e

Within the next hour, by 2:00 p.m. local time in Arkansas, Mahony called it quits and dropped out of the U.S. Senate race.

His campaign said in a release:

Joshua Mahony, Democratic Candidate for U.S. Senate, is officially exiting the race. Citing a family health concern, Mahony will no longer be able to devote the time and energy that is necessary to run a viable campaign. The campaign will cease operations immediately and Mr. Mahony asks for privacy during this time.

The release quotes Mahony himself too:

I would like to extend my deepest gratitude to all of those who have supported me during this race. It has been the honor of my life to be able to meet and visit with so many Arkansans over the last six months and hear their voices. It was my sincere hope to be their advocate in Washington, DC. However, in this moment right now, I need to focus on my family and place their interests first.

Since the filing deadline has passed now, it is next to impossible for Democrats to get anyone—even a no-name, empty suit of a candidate—onto the ballot in Arkansas. That means Cotton will almost certainly be unopposed in his reelection campaign next year, and a source close to Cotton told Breitbart News that frees the senator up to be much more aggressive in terms of making the case for President Donald Trump and against Democrats heading into 2020.

“Cotton is going to campaign for Republicans in Arkansas and across the country to make sure President Trump is re-elected and the open borders socialists don’t take over the Senate,” the source close to Cotton said.

Look for Cotton to be much more aggressive now that he is freed up to do whatever it takes to beat the left. And it couldn’t happen at a better time than now for President Trump. as the president fends off an impeachment effort by the Democrats in the majority in the House of Representatives.

Google Whistleblower Suggests His Wife’s Fatal Car Crash May Not Have...