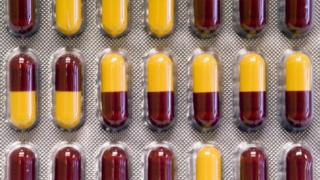 Drug resistance is an “existential threat” that could have a wide-ranging impact on Canadian health, economy, and society, a new report says.

The report, When Antibiotics Fail, says that in 2018, 26% of infections in Canada were resistant to drugs generally used to treat them.

The microbiologist told the BBC that the report, released on Tuesday by the Council of Canadian Academies (CCA), was a “wake-up call”.

“I personally think [antibacterial resistance] is up there in the realm of climate change as a threat to humanity,” he said.

The World Health Organization says it is a global threat that could undermine the ability to treat common infectious diseases.

Resistance to antibacterial and some antimicrobial drugs could increase the risk of common procedures like kidney dialysis, caesarean sections, joint replacements, and chemotherapy in Canada, the CCA report says.

It could also cost an already strained healthcare system billions through longer hospital stays and courses of treatment, and other expenses.

The report also looked at the potential social implications of antibiotic resistance, warning Canadian society may become less open and trusting, with people less likely to travel and more likely to limit their activities out of concern for infection.

Why are antibiotics becoming less effective?

Scottish chemist Alexander Fleming discovered the first true antibiotic, penicillin, in 1928, as a mould on a petri dish that inhibited the growth of bacteria. His discovery revolutionised the treatment of certain types of bacterial infection, saving countless lives in the process.

Antibiotics fight bacteria in a number of ways, including by killing them or preventing them from spreading. Many surgeries are dependent using antibiotics as a preventive measure.

Antibiotics are very effective at killing most, but not all, bacteria. Some bacteria acquire genes that protect them from the drug’s attack.

They survive treatment and reproduce themselves, spreading the key genes more widely so the drug becomes ever less effective.

If somebody is infected by these drug-resistant bacteria, then it can become harder to deploy antibiotics to treat them successfully.

At present other types of antibiotic might do the trick but the options are starting to narrow as bacteria develop the ability to block more than one drug.

What can be done in Canada?

Mr Finlay says Canada is not currently doing enough the mitigate the impact but is hopeful that action will be taken.

The report laid out a number of strategies that together could limit the impact of drug resistance.

That includes improving the monitoring of antibiotics use, infection prevention and control, the judicious in use of antibiotics and more public health campaigns.

Mr Finlay says it boils down to: “cherish antibiotics. They’re wonder drugs when they work.”