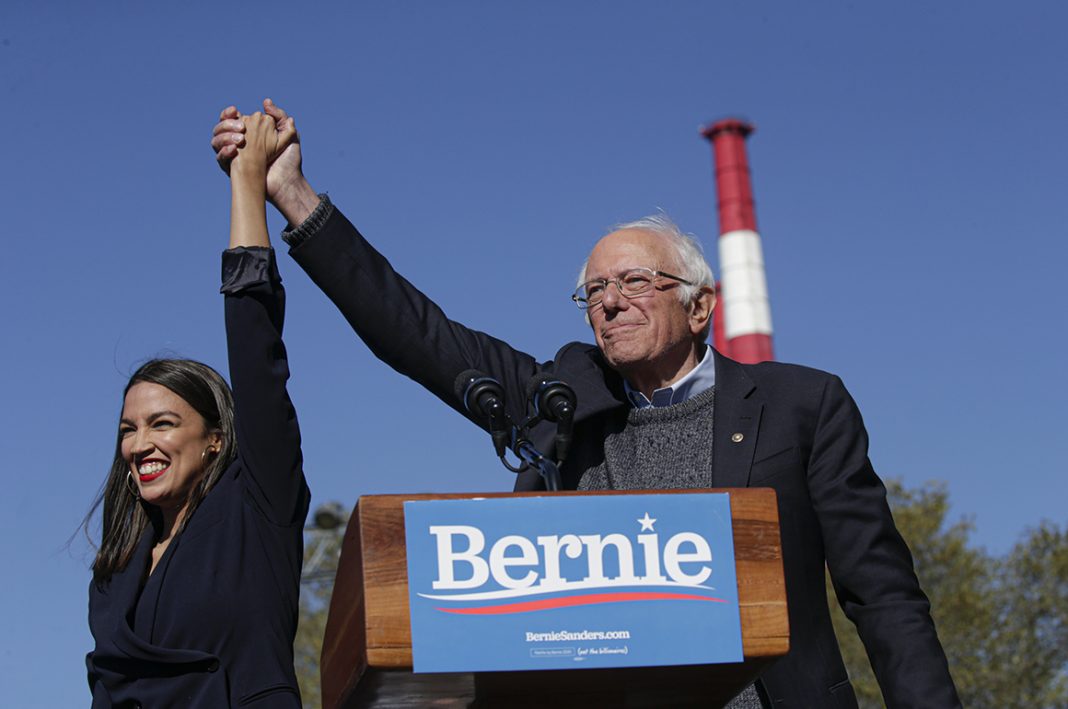 Ocasio-Cortez’s star power was put to the test in Middle America this weekend — and she and Sanders drew thousands of excited fans to three stops across Iowa. Audience members donned purple shirts emblazoned with the Bronx congresswoman’s name and shouted “I love you!” to her.

The raucous crowds demonstrated that Ocasio-Cortez can boost excitement and win media attention for Sanders’ campaign in the early-voting states, even if she comes with the downside of turning off some moderate voters. All three stops this weekend were larger than any Sanders had previously held in Iowa this year, bringing between 2,000 and 2,400 people each, according to the campaign. Sanders aides said the Council Bluffs rally drew more people than any other presidential campaign event in the state in 2019.

“Some campaigns struggle to make 1,000 face-to-face contacts in a week,” boasted Misty Rebik, Sanders’ Iowa state director. “We just tripled that in 24 hours.”

Ocasio-Cortez’s reception in the first-in-the-nation caucus state also fueled hopes among her supporters that she will run for president herself in the not-so-distant future.

Sanders’ aides worked to convert the excited rally-goers into dedicated volunteers and caucus-goers, passing around volunteer sign-up sheets at each stop this weekend. The campaign told POLITICO that it registered more than 3,000 new volunteers at the events as well as about 500 people to help out specifically on the night of the caucuses.

Sanders’ team believes that Ocasio-Cortez’s endorsement will excite the base and turn out young and progressive Democrats. But some of Sanders’ aides and allies hope it will also persuade new voters to give him a look.

“She’s going to do both,” said Stacey Walker, Sanders’ Iowa campaign co-chair, adding that “there is a generation of young political activists that see AOC as the future of the party” and “we will see an expanded turnout among the Latino community.”

But some Democratic officials doubt that the nod by Ocasio-Cortez, a democratic socialist, will pull in new voters for Sanders. Others said it could backfire among centrist caucus-goers.

“Western Iowa isn’t exactly New York City,” said Scott Punteney, leader of the Pottawattamie County Democratic Party, in explaining concerns about Ocasio-Cortez he’s heard from other officials. “Some of her ideas might not sit well with a lot of more moderate Democrats, which is kind of what we have in the area.”

The Council Bluffs rally was about a 10-minute drive from Omaha, Nebraska, and some in the crowd said they were residents of the Cornhusker State.

In interviews with nearly 20 voters at Sanders’ events this weekend, about half said Ocasio-Cortez’s endorsement made no difference to them. But women, in particular, said it was meaningful.

“Definitely,” Diana Bolinger, a middle-aged mother, said when asked if it’s a part of her considerations about whom to support. She said she is eyeing Sanders, Buttigieg and Kamala Harris. Ocasio-Cortez is “on top of things,” Bolinger said.

Ocasio-Cortez made a pitch for Sanders that was similar to the remarks she gave at a rally with him in New York City last month. That event drew about 26,000 people, according to Sanders’ campaign, which would make it the biggest event of the cycle.

Ocasio-Cortez also took jabs at some of Sanders’ rivals. She made a thinly veiled dig at Pete Buttigieg’s “Medicare for All Who Want It” plan, saying “we’re not going to get there with Medicare for some.” She said change comes “not through a technocratic policy proposal, but through a political revolution,” which some on social media interpreted as a contrast with Elizabeth Warren, though Ocasio-Cortez has repeatedly praised her and was initially eyeing Warren and Sanders when deciding whom to potentially endorse.

Reps. Ilhan Omar and Rashida Tlaib, who are also part of the so-called “Squad,” have held well-attended rallies with Sanders in their home states. Faiz Shakir, Sanders’ campaign manager, said they will stump for Sanders in the early-voting states “soon.”

Ocasio-Cortez knocked on voters’ doors in Des Moines during her swing through Iowa. One woman promised to caucus for Sanders, while a former party leader she ran into on the street told her that Sanders was his second choice after Joe Biden.

“Having knocked a lot of doors in New York City, knocking doors in Iowa is a much nicer thing. In New York, they’re like, ‘I don’t want to change my cable. Leave me alone,’” Ocasio-Cortez joked at a rally in Coralville. “But in Iowa, you just knock on a door and people are just open for a conversation. It’s really amazing and it’s beautiful.”