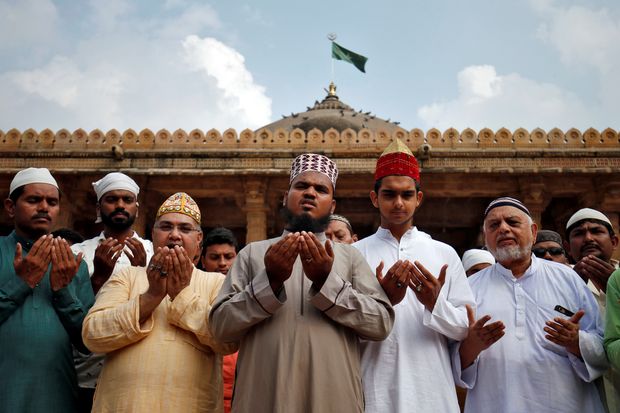 NEW DELHI—India’s Supreme Court, ruling on one of the country’s most divisive cases, paved the way for Hindu groups to build a temple on a religious site contested by Muslim groups seeking to rebuild a mosque that once stood in the same location.

The court granted control of the site to Prime Minister

government for its eventual placement into a trust made up of Hindu nationalist groups.

The court denied the petitions of Muslim groups. But it ordered an alternative location be provided to one of the groups to build a new mosque.

The ruling by a five-judge panel was unanimous.

The litigation, which began in 1950, revolved around the question of who would control a patch of land in Ayodhya, an ancient north Indian city, where a mosque stood for hundreds of years before a Hindu mob tore it down in 1992. Hindu activists believe the mosque had been built on top of a temple that had stood on the precise birthplace of an important Hindu deity, Ram.

In a series of tweets lauding the decision, Mr. Modi called the ruling “farsighted” and an indication that “any dispute can be amicably solved in the spirit of due process of the law.”

Zafaryab Jilani, the main lawyer for Muslim litigants said they were “dissatisfied” that the court granted them no say over the most intensely disputed piece of the property where Muslims once prayed under the dome of the previously existing mosque. He said the ruling contained “contradictions,” but also portions “that will also set good examples for the secular fabric of the country.” He said they groups would review the ruling and could ask the court to review the decision.

There were no reports of unrest immediately after the ruling was announced.

For all the case’s historical origins, its judgment will help shape India’s political and social landscape, and comes after recent changes made by Mr. Modi and his Hindu nationalist Bharatiya Janata Party that core backers have long pursued.

For decades, various political parties have tried to use the emotions surrounding the case for political advantage, none more effectively than the BJP. Since winning a landslide victory in national elections in May, Mr. Modi’s government has stripped autonomy from India’s only Muslim-majority state and pushed to deny citizenship to some Muslim immigrants who have long resided in India.

Muslim groups saw the case as a litmus test for how vigorously the court would enforce protections for minority religions in an era when Hindu nationalists are pressing for the government to more-prominently advocate for the interests of the country’s Hindu majority.

But gaining control of the site has been a priority on the Hindu nationalist agenda for decades.

In its ruling, the court focused on the merits of the suit filed on behalf of the idol of baby Ram that was placed on the disputed site in 1949 by a member of the Vishva Hindu Parishad, or VHP. The group is a sister organization of the BJP under their ideological parent, the Rashtriya Swayamsevak Sangh, or RSS, India’s main Hindu nationalist organization.

Since the late 1980s, the VHP has been at the forefront of a movement to build Ram’s temple at the disputed site.

The court directed the government to set up a trust and within three months hand over control of the disputed site for the construction of a Ram temple. The VHP and other Hindu groups already operate a similar trust in Ayodhya that runs a stonemasonry workshop near the disputed site where pillars intended for the hoped-for temple have been carved and stored since 1990.

“Our next step is to peacefully proceed toward building the temple,” said Sharad Sharma, a spokesman for the VHP in Ayodhya, after the court’s ruling on Saturday.

The issue has sparked violence before, in 1990 and again in 1992, when the mosque was torn down.

Mr. Modi had been involved in the movement to build a Ram temple there since he was a young activist with the country’s largest Hindu nationalist group. But his larger political fortunes became closely intertwined with the issue in 2002, shortly after he became the chief minister of Gujarat state.

Almost 60 activists heading home to Gujarat from Ayodhya were killed when their train caught fire—the cause of the blaze is still disputed. Rioting broke out in Gujarat, leaving more than 1,000 people dead, most of them Muslims. Mr. Modi was criticized for not doing enough to stop the violence. He has said he wasn’t to blame.

Thousands of paramilitary troops were dispatched to Ayodhya to supplement thousands more local police and troops that have been stationed there for years to maintain order in a town that receives tens of millions of Hindu pilgrims annually. It is also home to thousands of Hindu priests and ardent devotees.

Authorities have also urged calm in other parts of the country and bolstered security forces. Leaders on both sides of the dispute have told supporters to avoid celebrations or protests and accept the court’s ruling. National news stations covered the ruling live outside the courtroom, where hundreds of journalists, lawyers and activists gathered.

Hindu activists insist the mosque was built at the behest of an important Muslim ruler on top of a temple that marked Ram’s birthplace. In 1949, activists smuggled a small statue of Ram into the mosque and began worshiping it, starting a dispute that soon landed in court, kicking off the long-running litigation.

After twists and turns and changes in the main litigants—the Hindu deity Ram was even officially granted legal standing—the case reached India’s highest court in 2010.

That came after all sides appealed a lower-court ruling that said the site should be divided up into different parts for Hindus and Muslims, leaving no one happy.

Write to Bill Spindle at bill.spindle@wsj.com and Krishna Pokharel at krishna.pokharel@wsj.com