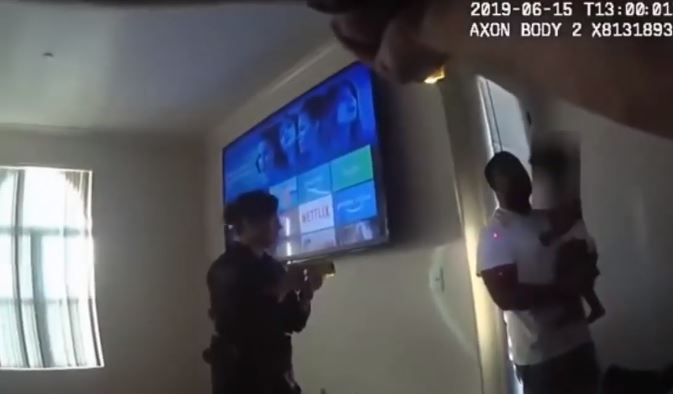 Tempe, Ariz., police responding to a domestic violence call tased a black man holding a 1-year-old baby in his apartment, sending the man and the child crashing to the floor.

Black Lives Matter activists are calling for the firing of the police officer who unleashed his Taser on Ivaughn Oakry, whose baby’s mother MeKayla Brand had called a non-emergency line to tell officers she was being manhandled inside Oakry’s home, according to Phoenix New Times.

Oakry has hired a legal group called The Peoples Law Firm to explore his options as well.

The incident, which happened in June, was captured on police officer Ronald Kerzaya’s body cam.

It shows officers including Kerzaya approaching Oakry’s home and knocking on his apartment door. Oakry opens the door and Kerzaya asks “What happenin’ man?”

After a brief exchange, Oakry backs into his apartment and tells police they are not allowed inside. Kerzaya orders him to put his hands on top of his head and Oakry refuses, retreating further into his apartment. Officers follow him inside and focus their red Taser lights on Oakry, who continues instructing them to leave his house.

As the back and forth intensifies, Oakry picks up one of his three crying kids, whose in diapers, and continues yelling for police to leave.

Brand, who’d allegedly told a police dispatcher Oakry pushed her several times, then gets involved in the tense standoff and urges police officers to leave.

“No, that’s not how this works,” Kerzaya said calmly. “You called us out here.”

Oakry, with a child in one arm, holds up his cell phone camera and trains it on one of the three officers pointing weapons at him.

Officers verbally coordinate with one another before firing their tasers, dropping Oakry to the floor, with the child still in his arms.

“Do it!” one officer repeated at least three times before moving in on Oakry. Once he hits the ground, an officer quickly takes the baby from his arms.

“This is my house!” Oakry cries out again, though this time while on the floor.

“All you had to do was drop the kid,” Kerzaya responded.

The officers then cuffed the suspect and took him away. Oakry, whom police said was intoxicated, was reportedly charged with misdemeanor assault in the domestic dispute, as well as child endangerment. Those charges were dropped.

Tempe police released a statement conceding that during the domestic situation “Oakry was affected by the taser,” but the child was not injured by the officers’ weapons or the fall.

NY Times Gets Blasted for Endorsing Both Warren Klobuchar

Jeff Flake: ‘Difficult’ for GOP Lawmakers to Speak Out Against Trump...