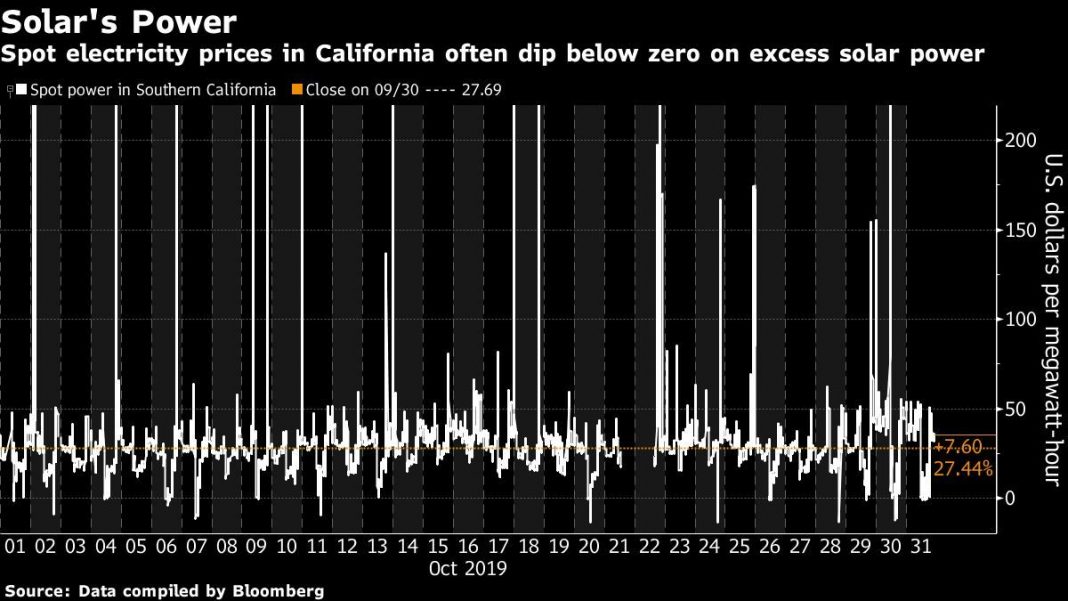 (Bloomberg) — As if California doesn’t have enough problems with its electric service, now regulators warn the state may be short on power supplies by 2021 if utilities don’t start lining up new resources now.

In the hopes of heading off a shortfall, the California Public Utilities Commission has ordered the state’s electricity providers to secure 3.3 additional gigawatts of reserve supplies. That’s enough to power roughly 2.5 million homes. Half of it must be in place by 2021 and the rest by August 2023.

The move comes as California is already struggling to accommodate increasingly large amounts of solar power that regularly send electricity prices plunging below zero and force other generators offline so the region’s grid doesn’t overload. The state is also still reeling from a series of deliberate mass blackouts that utilities imposed last month to keep their power lines from sparking wildfires amid strong winds. And its largest power company, PG&E Corp., went bankrupt in January.

Now as natural gas-fired power plants retire, officials are warning the state could run short on electricity on hot evenings, when solar production fades and commuters get home and crank up their air conditioners. “We have fewer resources that can be quickly turned on that can meet those peaks,” utilities commission member Liane Randolph said Thursday before the panel approved the order to beef up reserves.

The 3.3 gigawatts that utilities must line up is in addition to a state rule requiring them to sign contracts for 15% more electricity than they expect to need. Some critics question the need for added supplies, particularly after the state went on a plant-building boom in the 2000s.

But California’s grid managers say the risk of a shortfall is real and could be as high as 4.7 gigawatts. Mark Rothleder, with the California Independent System Operator, said the 15% cushion is a holdover from the days before big solar and wind farms made the grid more volatile. Now it may need to be increased, he said.

“We’re not in that world anymore,” said Rothleder, the operator’s vice president of state regulatory affairs. “The complexity of the system and the resources we have now are much different.”

The state’s three major utilities, PG&E, Edison International and Sempra Energy, will be largely responsible for securing new supplies. The commission banned fossil fuels from being used at any new power generators built to meet the requirement — though it left the door open for expansions at existing ones.

PG&E said in an emailed statement that it was pleased the commission didn’t adopt an earlier proposal to require 4 gigawatts of additional resources. Edison similarly said it was “supportive.” Sempra didn’t immediately respond with comment.

The pending plant closures are being hastened by a 2020 deadline requiring California’s coastal generators to stop using aging seawater-cooling systems. Some gas-fired power plants have said they’ll simply close instead of installing costly new cooling systems. So the commission on Thursday also asked California water regulators to extend the deadline for five plants.

The Sierra Club, meanwhile, called on regulators to turn away from fossil fuels altogether, saying their decision Thursday “sets California back on its progress toward a clean energy future.”

The move to push back the deadline also faces opposition from neighboring towns. Redondo Beach Mayor Bill Brand, whose city is home to one of the plants in line for an extension, told the commission it wasn’t necessary, since California utilities already have plenty of electricity reserves.

“It’s just piling on to that reserve margin,” Brand said.

To contact the reporter on this story: David R. Baker in San Francisco at dbaker116@bloomberg.net

To contact the editors responsible for this story: Lynn Doan at ldoan6@bloomberg.net, Joe Ryan, Reg Gale