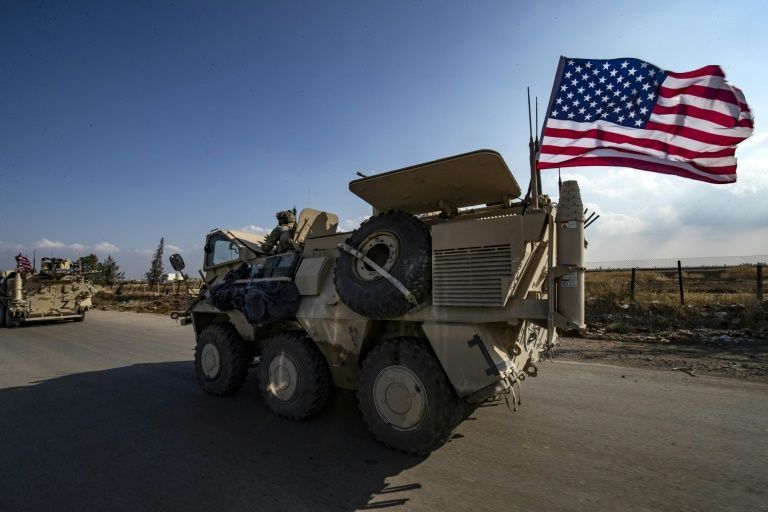 Washington (AFP) – The Pentagon is facing tough questions about the US military’s role in Syria. Troops are now limited to a smaller, tougher to defend zone, and focused on protecting oil fields that legally belong to Damascus.

The following is a look at the key factors in play:

On October 6, US President Donald Trump announced that the 1,000 soldiers deployed in northeast Syria to fight the Islamic State jihadist group would pull back.

“It is time for us to get out of these ridiculous Endless Wars, many of them tribal, and bring our soldiers home,” he tweeted.

But a month later, the United States has more or less the same number of personnel on the ground.

The special forces who were withdrawn from the area along the Turkish border were replaced with armored units in the area of Deir Ezzor in eastern Syria, where the country’s main oil fields are located.

Rear Admiral William Byrne, the vice director of the US Joint Chiefs of Staff, told reporters Thursday that the “steady withdrawal” from areas near Turkey was ongoing, and that most equipment had been moved.

The Kurdish-led Syrian Democratic Forces, a key US ally in the military campaign against the IS group, at first felt betrayed by Washington’s decision to pull back, but have resumed cooperating with US troops, Byrne added.

The Pentagon is still providing them with weapons, he noted.

So, is it not really a retreat after all?

“We’re committed to staying in the region,” a Pentagon spokesman, Jonathan Hoffman, said at the same press conference.

He added that US troops would remain in Syria “as long as we believe it’s necessary.”

While Trump has said the mission henceforth is to protect the oil fields, Pentagon officials ended up doing some semantic gymnastics to insist that fighting the IS group was still a US goal.

After all, the presence of IS fighters and the threat they pose to US national security is the justification for Washington’s intervention on foreign soil against the will of the home government.

“The mission is the defeat of ISIS. The securing of the oil fields is a subordinate task to that mission. And the purpose of that task is to deny ISIS the revenues from that oil infrastructure,” Byrne said.

Hoffman added that beyond denying IS fighters access to the oil fields, the US wanted to ensure that the SDF “actually have a revenue stream and the ability to work on building up their strength on the de-ISIS campaign.”

“This is not a new mission,” Hoffman said. “Everybody seems to believe that has changed. That is not the case.”

Until now, US forces controlled all Syrian territory east of the Euphrates, with the benefit of air defenses and the natural border created by the river.

Now, the presence of Russian, Turkish and Syrian forces in the north has opened a new front, which explains the deployment of armored units.

“Two reasons. One is mobility. They’ve got wheels and they go fast. And the second is force protection,” Byrne explained, saying the units were chosen “based on the threat.”

After the September 11, 2001 attacks, the US Congress authorized the executive branch to conduct unlimited military operations to combat terrorism.

The Pentagon is using that authorization as the basis for taking control of the Syrian oil fields.

When asked by a journalist if the United States was stealing Syrian oil, Hoffman replied: “The revenue from this is not going to the US. This is going to the SDF.”