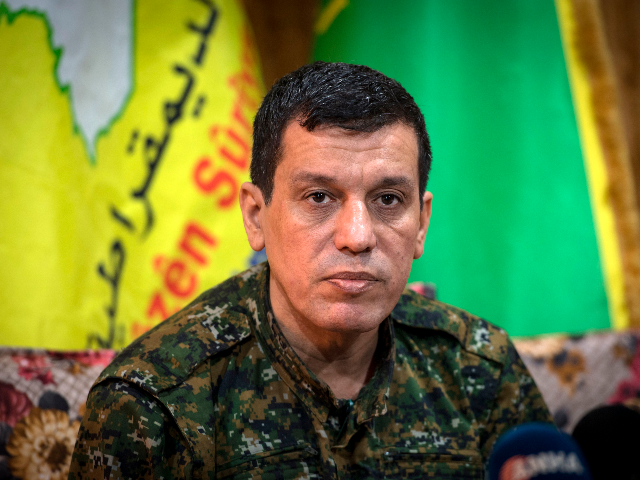 The commander of the Syrian Democratic Forces (SDF), Mazloum Abdi, told the Kurdish news outlet Rudaw in an interview published Tuesday that American troops are “definitely not” staying in Syria for oil.

President Donald Trump kept troops in Syria because he needed to save face after the global backlash against pulling out, Abdi proposed.

Trump announced in early October that he was withdrawing troops from Syrian Kurdistan (Rojava), citing the defeat of the Islamic State as a rationale for American troops no longer being needed there. Officials later clarified the “withdrawal” consisted of 50-100 soldiers who would move to other parts of Syria or Iraq, not back to the United States.

Abdi, who commands the largely Kurdish, U.S.-allied SDF – the forces responsible for taking the Islamic State out in its “capital,” Raqqa – told Rudaw he did not believe America needed oil and that this claim was a pretext for staying and helping Kurdish allies.

“President Trump was determined to withdraw forces, and they have already begun the withdrawal in Kobane, Manbij, Raqqa and in some parts of Tabqa,” Abdi said, listing several Rojava cities. “However, there was later great pressure on the Trump administration, such as opposition from Congress and the Senate. All our American friends, soldiers and politicians, oppose the Trump administration’s [decision]. President Trump’s fame was at risk.”

Abdi later added, “The main reason behind [the US presence] is definitely not oil. Everyone knows the US does not need the oil. They say that this oil should not fall into the hands of Daesh [Islamic State], the Syrian regime or other forces. But everyone knows they should have remained. The [pressure from people] was the main reason behind US reconsideration [of the decision to withdraw].”

Troops stayed in Syria “to lessen the pressure on the U.S. administration.”

Instead of leaving, Abdi said the U.S. will not only remain, but will “build new bases in new locations.”

Abdi later clarified that, while his forces opposed the abrupt pullout of U.S. forces from northern Syria, thereby allowing Turkey to invade, the Kurds “have never said we want U.S. troops to stay here forever to protect us. We have not made such a demand from U.S. troops or any other force.”

Instead, Abdi says the SDF wants an American presence in the country “until there is a solution in Syria, a constitution is passed, and a new administration is established.”

Abdi sternly criticized the United States for not doing enough to stop Turkey’s invasion of Rojava.

“We believe that the U.S. reaction [to the Turkish invasion] should not be one of economic sanctions, but to use its pressure and tell the Turks ‘You cannot attack.’ A single word like ‘Do not attack’ from Trump to Erdogan would stop the attack,” Abdi said. “However, the U.S. did not want its relations with Turkey to be harmed. They also did not want to harm its interests with Turkey. When comparing the interests of the Kurds and Turks, they chose Turkey.”

Abdi described Trump’s reaction to Erdogan’s move as “weak” and lamented, “The U.S. have to stop the Turks by force now.”

The objective of the ceasefire was to give the SDF time to withdraw from areas that Turkey objected it had occupied.

President Trump is expected to meet with Erdogan in Washington next week. According to Ankara, Trump invited Erdogan to meet for discussions on Syria, among other issues.