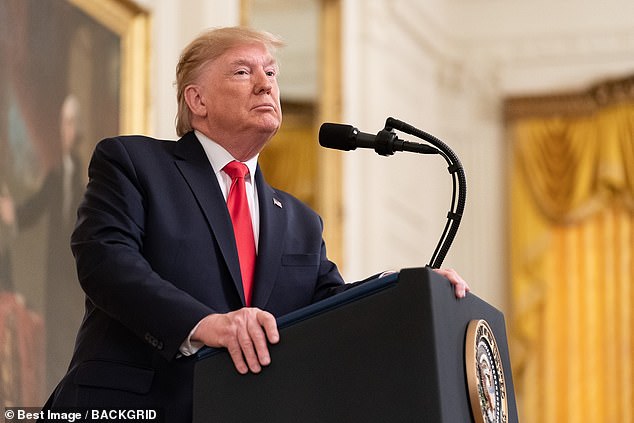 The anonymous author of a tell-all tome on the Donald Trump administration raises questions about the president’s mental fitness to hold office.

The author, who is described a ‘senior official in the Trump administration,’ claims Trump stumbles, slurs and is easily confused.

‘I am not qualified to diagnose the president’s mental acuity,’ Anonymous writes, according to a copy of the book obtained by The Washington Post. ‘All I can tell you is that normal people who spend any time with Donald Trump are uncomfortable by what they witness. He stumbles, slurs, gets confused, is easily irritated, and has trouble synthesizing information, not occasionally but with regularity. Those who would claim otherwise are lying to themselves or to the country.’ 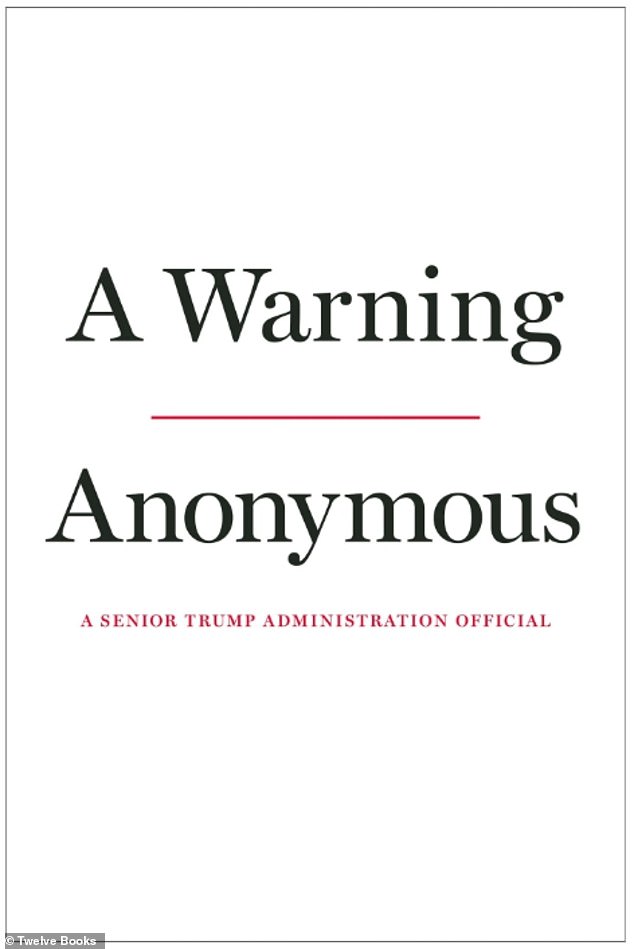 The book offers details of how Trump operates as president and paints a portrait of an inept and sometimes cruel commander in chief.

The author writes the president is ‘like a twelve-year-old in an air traffic control tower, pushing the buttons of government indiscriminately, indifferent to the planes skidding across the runway and the flights frantically diverting away from the airport.’

Anonymous is said to be the same person who wrote last year’s resistance op-ed in The New York Times. His or her 259-page book – ‘A Warning’ – is an expansion on that, revealing more behind-the-scenes details of the Trump administration at work.

In other scenes, the author describes senior officials waking up ‘in a full-blown panic’ over pronouncements Trump has made via Twitter.

The president often uses the social media platform to make policy pronouncements, attack his political rivals and fire his staff.

‘It’s like showing up at the nursing home at daybreak to find your elderly uncle running pantsless across the courtyard and cursing loudly about the cafeteria food, as worried attendants tried to catch him,’ Anonymous writes. ‘You’re stunned, amused, and embarrassed all at the same time. Only your uncle probably wouldn’t do it every single day, his words aren’t broadcast to the public, and he doesn’t have to lead the US government once he puts his pants on.’

‘I’ve sat and listened in uncomfortable silence as he talks about a woman’s appearance or performance,’ the person writes. ‘He comments on makeup. He makes jokes about weight. He critiques clothing. He questions the toughness of women in and around his orbit. He uses words like ‘sweetie’ and ‘honey’ to address accomplished professionals. This is precisely the way a boss shouldn’t act in the work environment.’

In the book, the author claims Trump used an attempted Hispanic accent during an Oval Office meeting to complain about illegal immigrants crossing the border.

‘We get these women coming in with like seven children,’ Trump said, according to the book excepts in The Washington Post. ‘They are saying, ‘Oh, please help! My husband left me!’ They are useless. They don’t do anything for our country. At least if they came in with a husband we could put him in the fields to pick corn or something.’ 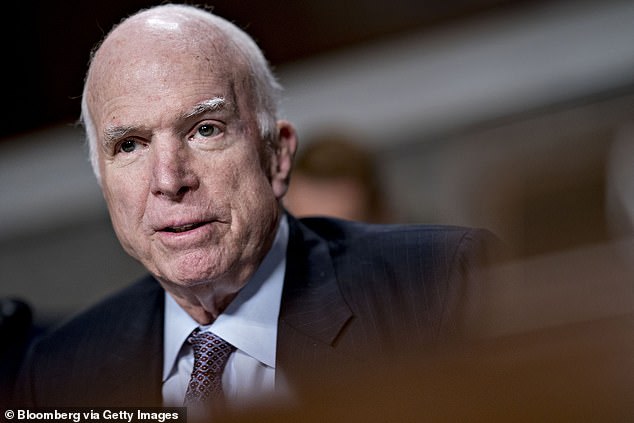 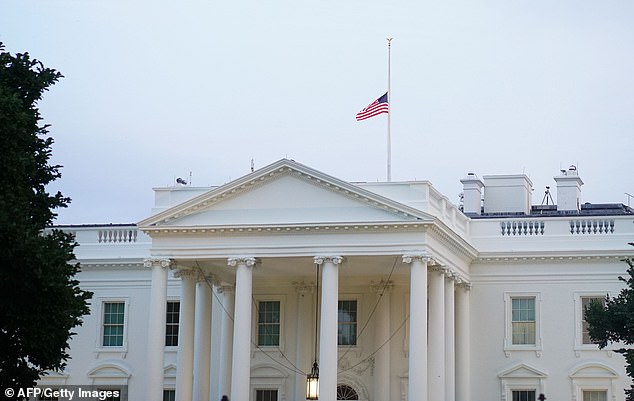 The author has been hit with criticism for not revealing his or her identity and has come under fire from the Trump administration.

Earlier this week, the Justice Department warned the author that he or she may be violating ‘one or more nondisclosure agreements’ by writing the book

The author’s agents, in return, accused the DoJ of trying to out the author’s identity.

And White House press secretary Stephanie Grisham has accused the author of being a coward.

‘The coward who wrote this book didn’t put their name on it because it is nothing but lies,’ Grisham said in a statement to the Post. ‘Real authors reach out to their subjects to get things fact checked — but this person is in hiding, making that very basic part of being a real writer impossible. Reporters who choose to write about this farce should have the journalistic integrity to cover the book as what it is — a work of fiction.’

Anonymous address the issue in the book and says he or she may come forward with their name in time.

‘I have decided to publish this anonymously because this debate is not about me,’ the author writes. ‘It is about us. It is about how we want the presidency to reflect our country, and that is where the discussion should center. Some will call this ‘cowardice.’ My feelings are not hurt by the accusation. Nor am I unprepared to attach my name to criticism of President Trump. I may do so, in due course.’ 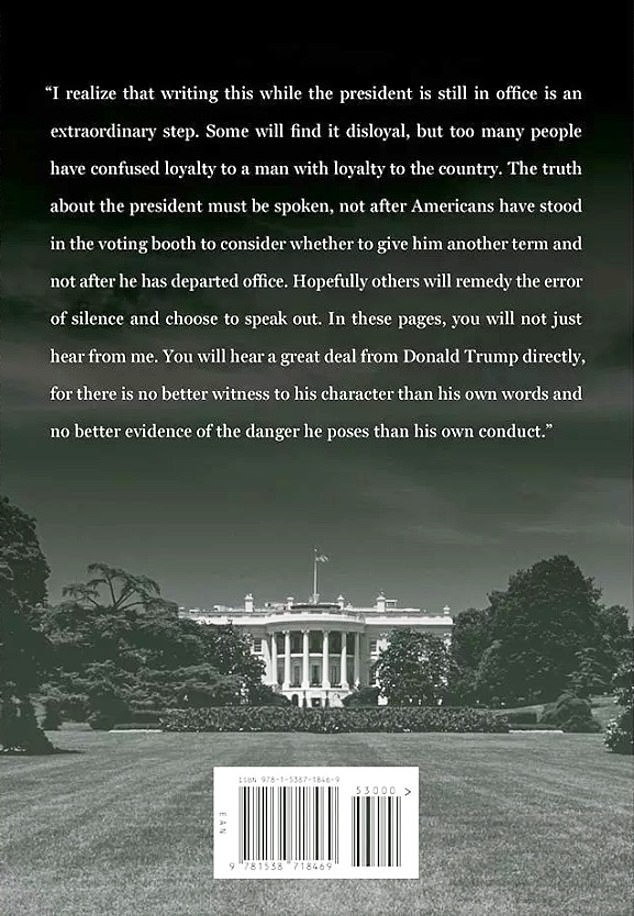 The book seems full of the kind of tidbits that makes for good headlines and good dinner table conversation.

The author writes that President Trump considered presidential pardons as ‘unlimited ‘Get Out of Jail Free’ cards on a Monopoly board’ as he considered them for aides caught up in various investigations being conducted into the administration.

Trump also grumbled about various court rulings against his administration policies, including against his 2017 travel ban, so he asked White House lawyers to draft a bill to send to Congress reducing the number of federal judges.

‘Can we just get rid of the judges? Let’s get rid of the [expletive] judges,’ he said, according to the book. ‘There shouldn’t be any at all, really.’

‘Many reasonable people voted for Trump because they love their country, wanted to shake up the establishment, and felt that the alternative was worse,’ Anonymous writes, The Times notes in an except. ‘I know you because I’ve felt the same way.’

In its review of the book, the Times writes Anonymous seems to realize ‘somewhat belatedly, that President Trump’s peddling of birtherism conspiracy theories and his boasts about grabbing women’s genitals might have constituted their own kind of warning — plausible evidence that Mr. Trump might not magically transform into the dignified statesman Anonymous so desperately wanted him to be.’

The author notes his or her breaking point was Senator John McCain’s death last year when the president tried to keep the flag at the White House from being lowered to half-staff.

‘President Trump, in unprecedented fashion, was determined to use his office to limit the nation’s recognition of John McCain’s legacy,’ Anonymous write.

Expert warns NASCAR fans in Fort Worth may be a mistake