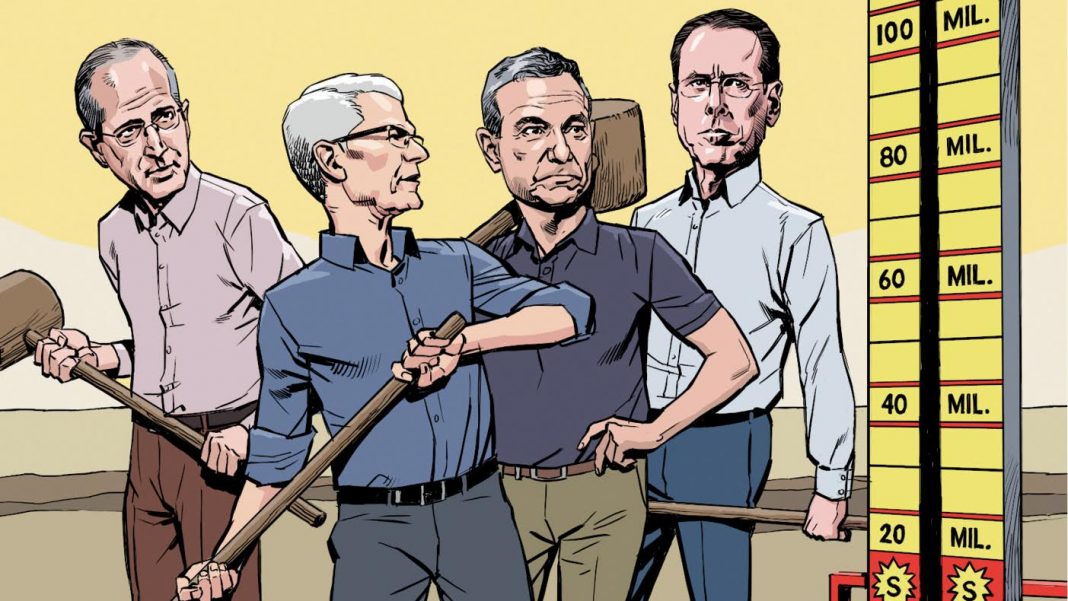 When Disney+ launches Nov. 12, the new streaming service will begin what Disney CEO Bob Iger hopes is a quick journey to at least 60 million subscribers by the end of 2024. Six months later, on a still-to-be-announced date in May, HBO Max will take off on its own sprint to hit at least 75 million subscribers in 2025.

Instead of the “streaming wars,” it’s more like a streaming race as each new entrant that launches strives to reach ambitious subscriber goals and carve out a piece of the overall direct-to-consumer video market. With U.S. pay TV subscribers expected to drop from north of 100 million in 2014 to 78 million by 2022, per research from Sanford C. Bernstein, every company has recognized an opportunity to lure those cable defectors (and recruit digital natives) to their services. But with four new offerings — Apple TV+, Disney+, HBO Max and Peacock — flooding the market over the next year, it’s anyone’s guess how customers will respond to the glut of choices, especially as the cost of several subscriptions mounts.

“It is not a zero-sum game,” contends Wedbush Securities analyst Michael Pachter. “People can subscribe to multiple streaming services.” Still, the number of adults ages 30 to 44 paying for more than five streaming services currently sits at a low 4 percent, per a Hollywood Reporter/Morning Consult poll conducted Oct. 24 to 28, and a July survey of more than 2,000 adults found that a $21 bill across three services is the optimal price point to woo many subscribers. Given that subscribing to the four new services plus Netflix and Hulu will cost upward of $45 a month (not including the cost of internet access), every company will need to get creative to turn these multibillion-dollar bets into profitable ventures.

Though Disney is starting from zero to build up its Disney+ subscriber base, Carmel Group analyst Jimmy Schaeffler calls it the “1,000-pound gorilla in every room” thanks to the strength of its brand, which will be on display through its library and programming like Star Wars-adjacent The Mandalorian.

Still, without the advantage of a preexisting large-scale direct-to-consumer relationship with its fans, Disney also is looking to other subscriber acquisition tactics as it seeks to hit between 60 million and 90 million members (and reach profitability) in the next five years, offering discounts in exchange for three-year commitments and putting the pieces in place to bundle the service with ESPN+ and Hulu, which already have 2 million and 28 million subscribers, respectively. It also has struck a deal with Verizon to offer Disney+ free for a year to unlimited wireless customers, exposing it to as many as 18 million potential new members.

Where Disney+ could struggle would be in enticing adults without children who aren’t swayed by a lineup heavy with genre fare from Marvel and Lucasfilm. But direct-to-consumer and international chairman Kevin Mayer shrugged off those concerns in an October interview with THR, noting that testing in the Netherlands — where Marvel’s Agents of SHIELD and The Suite Life of Zack & Cody have been top-streamed series — “shows that the diversity of appeal that we’ve hoped for is starting to take shape.”

Brand also is at the forefront of WarnerMedia’s plans to market HBO Max, which will offer 10,000 hours of programming, including the full HBO lineup, Friends, films like The Lord of the Rings and originals such as a Gossip Girl reboot. As executives ramp up their efforts to reach $1 billion in profits and between 75 million and 90 million subscribers globally by 2025 (including 50 million in the U.S.), the $15-a-month service also has the advantage of being the same price as HBO. The 10 million people who currently subscribe to HBO via WarnerMedia parent AT&T will be grandfathered into HBO Max, and the company is in talks with pay TV providers about offering a premium to woo HBO’s remaining 24 million subscribers.

“I look at it as a degree of an IQ test,” WarnerMedia CEO John Stankey told investors Oct. 29, questioning the logic of a subscriber who wouldn’t opt into twice the content as HBO “for the same price.” But LightShed Partners analyst Rich Greenfield notes, “HBO as we have known it will not exist going forward,” as the result of the HBO Max launch, which could risk diluting the brand.

Apple and NBCUniversal have yet to publicly set subscriber goals for their offerings, though each company expects to have built-in a membership base. For Apple, its TV+ is a perk designed to entice people to buy new devices. With a user base of 1.4 billion — and 900 million iPhones on the market — the $5-a-month service has the potential to gain traction among existing Apple customers.

But, says Schaeffler, “people don’t know Apple TV+ for its content,” so to entice them to give the service a try, the tech giant is offering a year free to customers who upgrade qualifying Apple devices. It’s a move that Barclays analyst Tim Long estimates could translate into “well over 100 million subscribers a year from now.” Apple TV+ also is looking to become a hub for access to other streamers, a strategy Amazon has pursued.

NBCU, meanwhile, is expected to offer an ad-supported version of Peacock to 55 million Comcast cable and Sky customers, who could immediately have free access to the service’s 15,000-plus hours of programming, including The Office and new shows from Sam Esmail and Mike Schur.

But none of these services will build membership bases in isolation, and they must contend with a market dominated by Netflix, which has 158 million global subscribers, as well as Amazon Prime and Hulu. Digital TV Research forecasts that in the next five years, the number of gross video subs worldwide will increase to 970 million. Each new entrant will now fight for a piece of that pie.

As Stankey noted from the stage of WarnerMedia’s HBO Max reveal: “In the era of Amazon, Apple, Google and Netflix, scale is no longer defined by distribution to one-fourth of U.S. consumers. It’s a global game.”

This story appeared in the Nov. 6 issue of The Hollywood Reporter magazine. To receive the magazine, click here to subscribe.