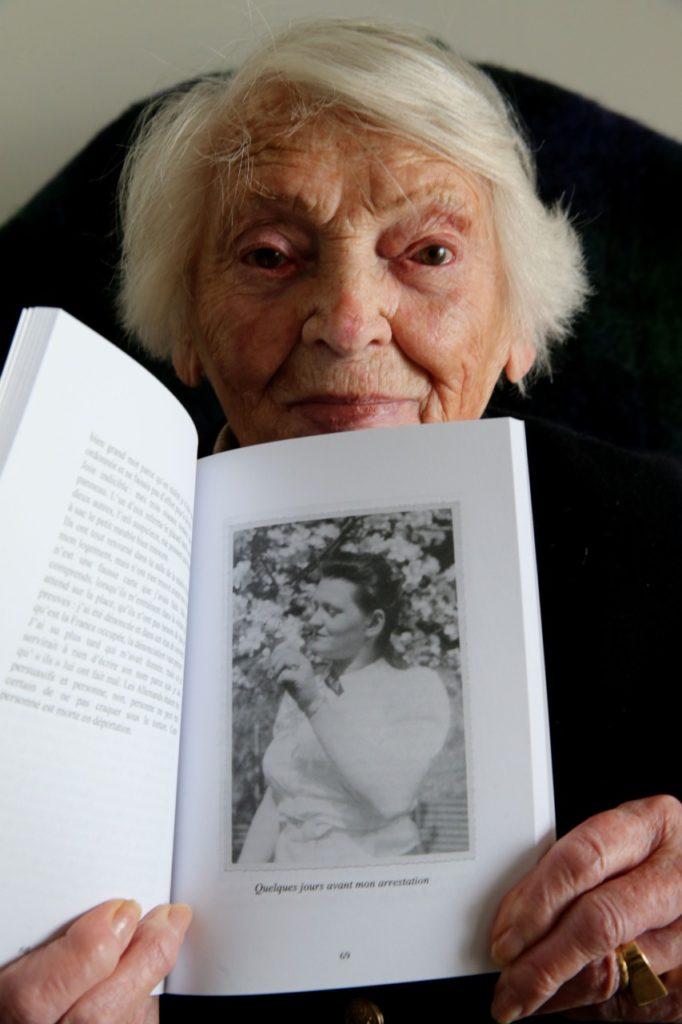 The youngest of seven children from a farming family in the champagne-growing region around Épernay, Lundy was a schoolteacher during the occupation and also worked at the town hall, a key job that allowed her to join a resistance network known as the Possum Escape Line.

From 1940, she supplied fake papers to Jews, men fleeing the Nazis’ forced labour programme — the STO — in Germany, and escaped prisoners of war, who were hidden by her brother Georges at his farm.

But the Gestapo caught up with her in June 1944, arresting Lundy, then 28, at her school.

Yvette Lundy, 101, poses with a book displaying a picture of her when she was young on April 26, 2017 at a retired home in Epernay, northeastern France. ( FRANCOIS NASCIMBENI/AFP via Getty Images)

She would be interned at Ravensbruck some 80 kilometres north of Berlin, the only camp reserved for women and children.

Lundy would never forget the dehumanisation she experienced there from the very beginning, when she was forced to undress in front of SS officers.

“The body is naked and the brain is suddenly in tatters. You’re like a hole, a hole full of emptiness, and if you look around it’s more emptiness,” Lundy said.

In an interview with French daily Le Parisien in 2009, she said: “I will never forget the screams and cries in the night from the women who no longer had their children.”

The ordeal would last nearly a year until Lundy was assigned to a Kommando slave labour unit near Weimar — liberated by the Russian army in April 1945.

“Still today, I think of the camp at one point each day… often at night before I fall asleep,” Lundy told AFP in 2017.

It took nearly 15 years after Lundy’s liberation before she began to speak out about her experiences, giving talks to French and German students.

She always shared with them a timeless piece of advice: “Always ask: Where are we going? With whom? What are we doing? Each and every one of us has a responsibility, regardless of how young we are.”

She would never return to Ravensbruck, saying that her return to France was a pure “miracle”.

On the occasion of her 100th birthday, she was elevated to the Legion of Honour’s second-highest level, that of Grand Officer.

Mayor of Épernay Franck Leroy said on Facebook that Lundy “represented the honour of France during the darkest hours of our history”.

Leroy praised her “incredible commitment to the duty of remembrance”.

She “also had a viewpoint on war and notably on Franco-German reconciliation, which she saw as extremely important”, he said.

“She was an example to all of us, even though she wouldn’t have liked me saying that … .”

Monkeys Not Really Far Behind Man in Evolution, This Video Shows They Know About Covering Faces

Johnny Depp scrawled ‘I love u’ in his BLOOD with severed...

Monkeys Not Really Far Behind Man in Evolution, This Video Shows...

Marquette U. Threatened to Revoke Acceptance over Pro-Trump TikTok Video