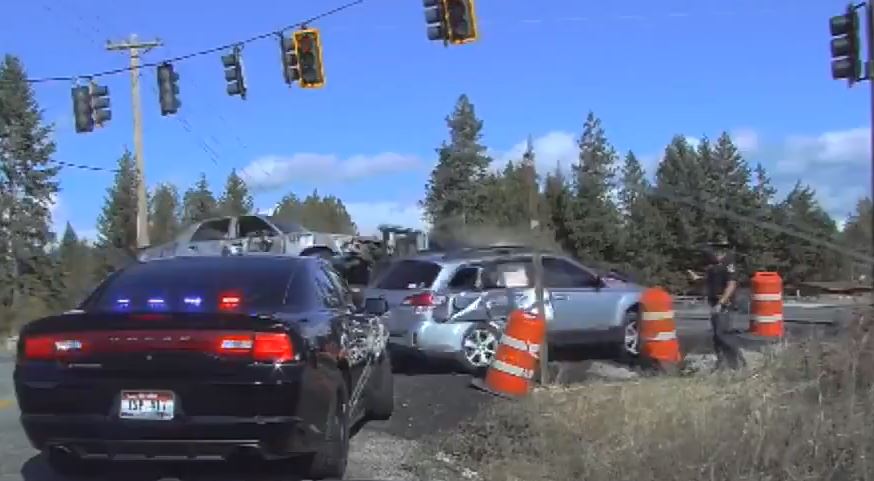 Idaho State Police shared a dashcam video on Wednesday that showed a trooper nearly being struck by a vehicle when an oncoming driver slammed into the crash scene the trooper was investigating.

ISP Trooper Enrique Llerenas was responding to a crash on Oct. 8 near Idaho 53 and Ramsey Road, north of Coeur d’Alene, according to ISP’s tweet. Llerenas was not injured.

“Please slow down, move over, and pay attention when approaching emergency vehicles/incidents,” ISP said in a tweet.

According to ISP, the tow truck driver seen in the video did not cause the crash that threatened the trooper in Kootenai County.

Idaho has a so-called “move over” law. According to ISP’s website, the law requires motorists to slow down and move over, if possible, when approaching a stationary police or authorized emergency vehicle displaying flashing lights.

Nationwide, between 2005 and 2017, 775 officers died due to motor vehicle-related incidents, either by being struck by vehicles or in crashes while on-duty, according to the National Law Enforcement Officers Memorial Fund.

In the first half of 2019 alone, 11 police officers have been fatally struck by vehicles while standing on the side of the road, according to a report from the memorial fund.

Houston is starting to look like New York City before the...

Queen’s ‘Palace Letters’ to Australia to Be Published in Full

11th case of dengue fever confirmed in the Florida Keys