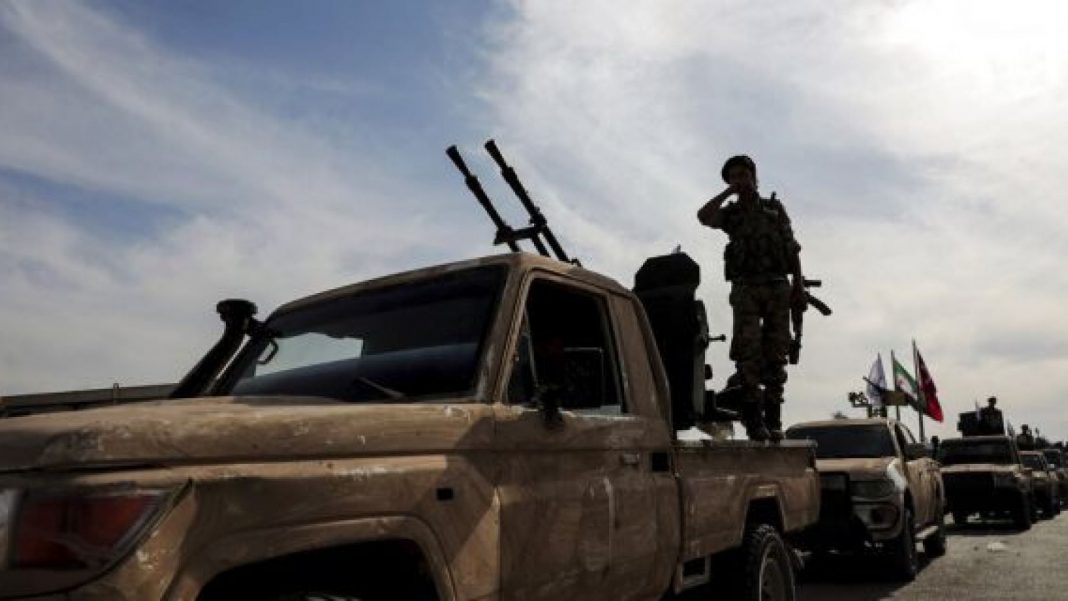 Russia brokers deal between Kurds and Damascus to stem Turkish offensive: report; Trump seeing ‘consensus’ in new sanctions on Turkey
Nearly a week after the U.S. announced its decision to pull out troops from northern Syria to make way for a Turkish incursion, Kurdish forces in the country have reportedly agreed to a new deal with Damascus in a desperate bid to face off against Ankara’s offensive. The New York Times reported that the deal– which was announced Sunday evening– would enable President Bashar al-Assad’s forces to attempt to regain a foothold in the country’s northeast. The Washington Post reported that the deal was reached after three days of negotiations between the Kurdish forces, Russian envoys and Damascus. Click here for more on our top story.

The latest development comes as at least nine people, including five civilians, were killed Sunday in Turkish airstrikes on a convoy in the Syrian border town of Ras al-Ayn, according to the Syrian Observatory for Human Rights and Syrian Kurdish officials. In an interview on Fox News Sunday, Secretary of Defense Mark Esper defended Trump’s decision to withdraw U.S. forces and said the U.S. is urging Turkish President Recep Tayyip Erdoğan to cease the aggression.

Esper said that roughly 1,000 troops will be withdrawing from the north of the country. A U.S. official told Fox News that forces will not be leaving the country altogether, but will be moving southward. Meanwhile, in a series of tweets, Trump himself denounced getting involved in “endless wars” and talked up wide support in Washington in imposing news sanctions against Turkey.

‘Where’s Hunter?’ Trump asks, as Biden’s son promises not to work with foreign companies if father wins presidency in 2020
President Trump targeted Hunter Biden Sunday morning, implying that the son of former Vice President Joe Biden has disappeared — hours after Hunter Biden’s attorney announced his client is stepping down from the board of a Chinese company and vowed that he will not work with foreign companies if his father becomes president. “Where’s Hunter? He has totally disappeared!” Trump tweeted. Trump and his own attorney, former New York City Mayor Rudy Giuliani, have accused Hunter Biden of improperly benefiting from business dealings in China and Ukraine while Joe Biden was vice president.

Mexico halts caravan of 2,000 migrants bound for US
A caravan of roughly 2,000 migrants bound for the United States was halted by Mexican authorities over the weekend only a few hours into their journey, according to officials. The caravan, which consisted of migrants from Africa, the Caribbean, and Central America, left before dawn Saturday from Tapachula, a town in southern Mexico near the Guatemalan border, Reuters reported. About 24 miles into their journey, federal police and national guardsmen blocked their path. The abrupt halt of the caravan stood in stark contrast to last year when waves of U.S.-bound caravans – including one of at least 7,000 people – drew widespread media coverage while immigration officials on both sides of the border struggled to stem the flow.

China’s trade with US shrinks again in September
The trade war between the U.S. and China continues to take a toll on the Chinese economy and threatens to tip the global economy into recession. China’s trade with the United States fell by double digits again in September. Exports to the United States, China’s biggest foreign market, fell 17.8 percent to $36.5 billion, a deterioration from August’s 16 percent decline, customs data showed Monday. Imports of American goods sank 20.6 percent from the year before to $10.6 billion, a slight improvement over August’s 22 percent decline.

Master Sgt. Mark Allen dies 10 years after being shot while searching for Army deserter Bergdahl
Retired Army Master Sgt. Mark Allen died on Saturday, 10 years after he was shot while looking for a missing soldier Army Sgt. Bowe Bergdahl in Afghanistan back in 2009. He was 46. Allen was unable to walk or speak since being shot in the head by a sniper in July 2009 during his attempted search for Bergdahl, who walked off his base in Afghanistan and was imprisoned by the Taliban for five years.

Bergdahl later pleaded guilty to desertion, misbehavior and endangering the lives of fellow soldiers, including Allen and was reduced in rank from sergeant to private and fined $1,000 per month over a ten-month period.

TODAY’S MUST-READS
Marine walks more than 800 miles around Lake Michigan in 42 days to raise awareness for veteran suicide.
Christen Limbaugh Bloom: ‘Joker’ movie’s violence isn’t what most upset me – THIS is.
Missouri mom’s before, after photos of addicted son go viral: ‘The face of heroin and meth.’

In a special “Swamp Watch” on “The Next Revolution,” Steve Hilton points out that Joe and Hunter Biden continue to dodge an investigation of the family business dealings in Ukraine while Trump faces a formal impeachment inquiry.

Fox News First is compiled by Fox News’ Bryan Robinson. Thank you for joining us! Enjoy your day! We’ll see you in your inbox first thing on Tuesday morning.