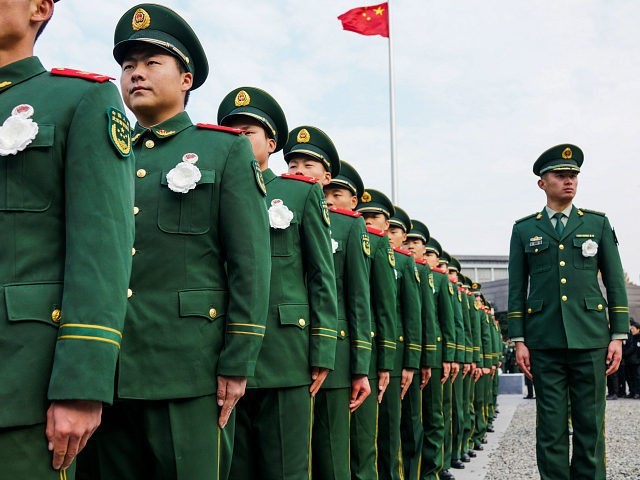 Over the last decade, ESPN has been quick to attack America for not being progressive enough on rights for minorities, women, and gays. However, the NBA’s flap with the oppressive Chinese government and ESPN’s reaction to it, has cast a harsh light on the sports network’s lack of credibility on those issues.

ESPN has repeatedly attacked President Donald Trump, Republicans, and Americans for reputed violations of rights for transgenders and gays, supposed endemic racism, and a general air of oppression.

But the network’s overt support of the NBA in the league’s haste to smooth the feathers of the Chinese communists in the face of criticism of that country’s move to quash a pro-democracy movement in Hong Kong, stands in stark contrast to ESPN’s past proclamations about its support for progressive issues. As Breitbart News reported on Tuesday, for instance, ESPN even told its staffers to avoid discussing the political situation between China and Hong Kong.
But ESPN’s commentators were entirely unrestrained when attacking North Carolina for being “homophobic” and “transphobic.”

In March of 2017 for instance, ESPN host Rachel Nichols insisted that North Carolina’s law aimed at keeping children and women safe in public washrooms was somehow just like the “lunch counter” protests during the Civil Rights era. That same month, Nichols also openly advised the NBA to boycott North Carolina.

In another piece that month, ESPN’s Katie Barnes called the bill a “setback to transgender inclusion” without noting that others felt it was a move in favor of religious freedom and the safety of vulnerable women and girls using public washrooms. Indeed, ESPN continually reported about the bill by exclusively defining it along the lines of the radical gay rights agenda by calling the proposal a pro-discrimination bill, an anti-transgender bill, and a bill that took away people’s rights.

The North Carolina bathroom bill was only one instance of ESPN’s dive into social justice. Back in 2014 the network was seen urging the NFL to boycott the state of Arizona over the state’s SB 1062 religious freedom bill. ESPN host Tony Kornheiser accused Arizona of replicating Nazi Germany’s anti-Jewish “yellow star” laws.

ESPN’s hosts have urged other boycotts, as well. In 2017, now-former ESPN social justice warrior Jemele Hill suggested that fans could boycott the NFL and the Dallas Cowboys after team Owner Jerry Jones told his players they would not play if they protested the national anthem.
The network has also seen a list of hosts vociferously supporting LGBTQ issues. ESPNW’s Katie Barns, for instance, supplied several stories celebrating the LGBTQ agenda and attacking those that she thought might be in opposition.

Jemele Hill also plied these issues. In 2016, for instance, ESPN tolerated Hill’s proclamation that the U.S.A. does “everything possible to undermine the LGBTQ community.”

On the other hand, when hosts dared speak from a Christian perspective, the network came down quickly to denounce the views. In 2013, ESPN was quite unhappy that commentator Chris Broussard expressed a Christian worldview. As a result, the network disavowed Broussard for his comments.

All this isn’t even to mention the fact that ever y personality the network had,  stood four-square behind former NFL quarterback Colin Kaepernick for his season-long protests against the U.S. over black lives matters issues.

Meanwhile, despite all this “woke” history of attacking real or imagined violations of social justice in the U.S.A., ESPN is now seeking to stifle its staffers, writers, and on-air hosts from discussing the real human rights abuses in China.

There is little disagreement on the international stage among left and right when it comes to China’s terrible human rights record.
The world’s premier watchdog organizations, Human Rights Watch, says China is still one of the worst abusers of human rights in the world. In its 2018 report, HRW reported that China has “dramatically stepped up repression and systematic abuses against the 13 million Turkic Muslims, including Uyghurs and ethnic Kazakhs, in China’s northwestern Xinjiang region.”

“Authorities have carried out mass arbitrary detention, torture, and mistreatment of some of them in various detention facilities, and increasingly imposed pervasive controls on daily life,” HRW wrote. “New regulations in Tibet now criminalize even traditional forms of social action, including community mediation by religious figures. In Hong Kong, a region promised ‘a high degree of autonomy’ under the Sino-British Joint Declaration, the Chinese and Hong Kong governments hastened their efforts in 2018 to undermine people’s rights to free speech and political participation.”

The organization also cited China’s oppression of its homosexuals, refugees, asylum seekers, women, and girls, and that is not to even mention its actions against Tibet.

Medical journal Lancet, has also criticized China, home to one of the largest LGBTQ populations in the world, saying that the communist country commits serious persecution and discrimination against its gay population. LGBTQ children even face serious oppression and abuse by parents for being gay, while Chinese authorities turn a blind eye to such abuse.

Despite China’s abuse of its LGBTQ citizens, the woke ESPN has been silent about all these abuses in a country the NBA is courting for its big-dollar deals.

So, why the silence? Why is it so easy for ESPN to attack America while turning a blind eye to far worse conditions in China? It seems to be all about the money, not the principles.

According to New York Business Journal, ESPN spend a $2.6 billion to broadcast the NBA’s games. So, with the NBA publicly kowtowing to China’s dictates and refusing to denounce the country over its dismal human rights record, ESPN seems to be dutifully following along with its business partner.