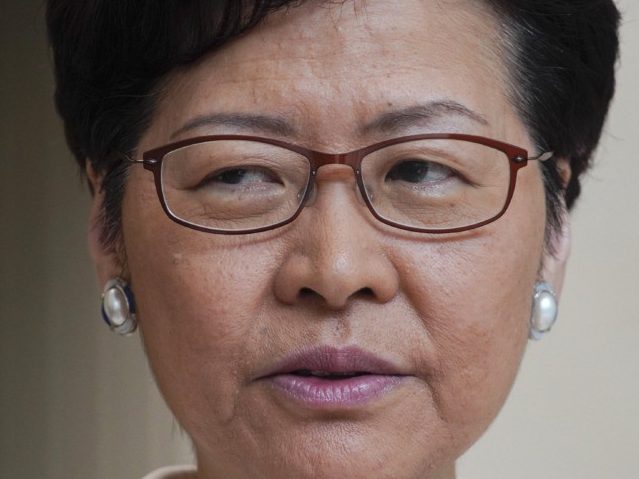 Hong Kong’s pro-China Chief Executive Carrie Lam is officially the least popular leader in the region’s history, according to a public survey published this week.

The latest polling from Hong Kong Public Opinion Research Institute indicates that Lam has an approval rating of just 22.3 percent, making her the least popular head of the city since the U.K. gave Hong Kong up to China in 1997.

The institute had a sample range of 1,004 people between September 30 and October 3 by landline and mobile phone.

Her collapse in popularity comes as pro-democracy demonstrations continue across the city as part of a pushback against China’s increasing interference in their internal affairs, widely seen as a betrayal of the “One Country, Two Systems” agreement with the British Empire.

The protests initially began in June as a response to a proposed extradition bill that would allow China to command Hong Kong to extradite individuals present in the city. Lam promised protesters the Legislative Council would withdraw the bill, but lawmakers have taken no concrete steps to do so. Protesters have added four demands to their list: the release of political prisoners, an investigation into police brutality, direct election of lawmakers, and an end to the government referring to them incorrectly as “rioters.”

Lam, who owes her position entirely to Beijing, has previously admitted that she would like to resign but Chinese authorities forbade her. Since that confession, Lam has threatened to pass laws curbing the freedom of the press and imposed a ban on facemasks, commonly used to protect from tear gas.

This week, Lam confirmed that she would not rule out asking to China to intervene if “limitless and lawless” violence continues to ravage the semi-autonomous city.

“At this point in time, I still strongly feel that we should find the solutions ourselves. It is also the position of the central government that Hong Kong should tackle the problem on her own,” Lam said at a press conference. “But if the situation becomes so bad, then no options can be ruled out if we want Hong Kong to at least have another chance.”