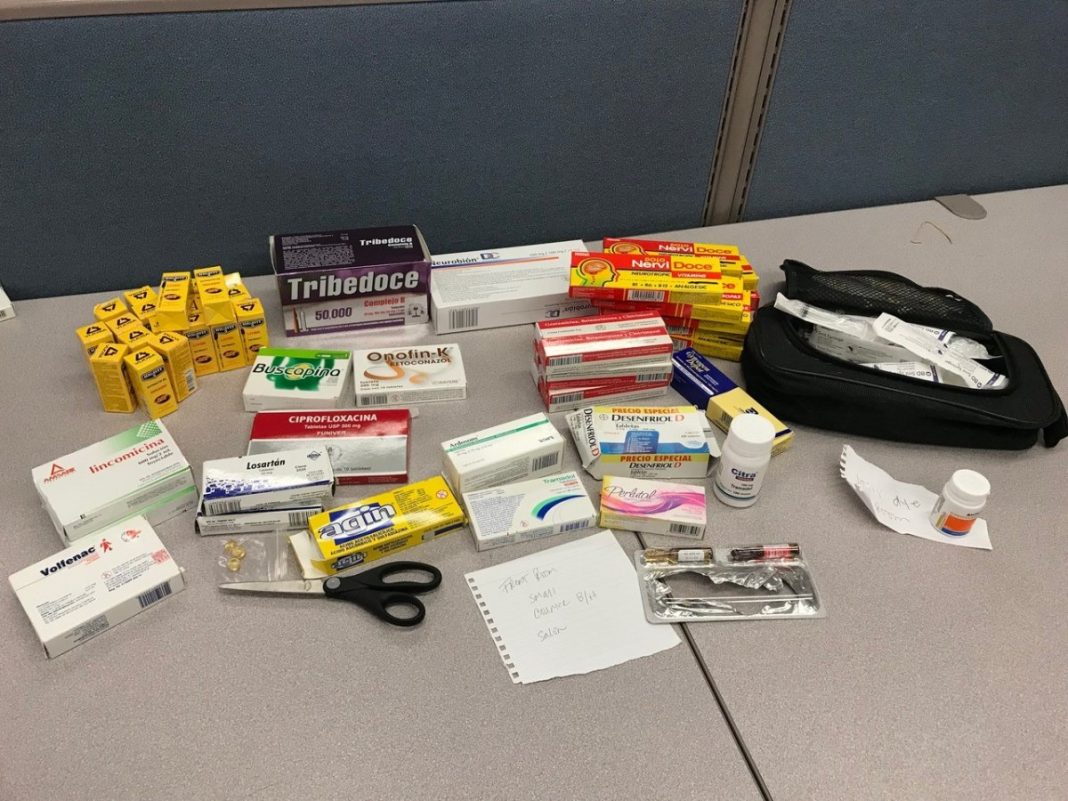 The bootleg medications were smuggled across the border and sold to mostly Latino immigrants in public spaces throughout Los Angeles — at swap meets, parks, beauty salons and makeshift stands outside mom-and-pop grocery stores.

The drugs were cheap, and the customers — mostly from Mexico and Central America — did not need prescriptions to buy them. Some of the products featured brand names and colorful packaging that immigrants knew well from their home countries — including Ciprofloxacina, a potent antibiotic, and Dolo Nervi Doce — translated as “Pain Nerve 12” — an injectable B-complex vitamin taken for fatigue.

Many were sheer counterfeits. Others, though legal south of the border, were not approved for sale in the United States. Some had expired. Still others would have been legal if sold by people licensed to do so — but none of the sellers held pharmacist licenses or any other medical credential.

L.A. County authorities seized the drugs last month in an operation that led to the arrest of eight people. Their haul included 100,000 foreign-made pills, compounds and injectable medicines they said could have caused serious harm or even death to consumers.

Immigrants, not just from Hispanic countries but from all over the world — and some non-immigrants, too — are purchasing a wide array of illegal medications in black markets that are common not only in Southern California but in states such as Arizona, Maryland, Texas, Virginia and Washington, according to law enforcement officials and others familiar with the trade.

“We’re seeing this in all communities across the country that don’t have access to health care services,” said Adolph Falcon, executive vice president of the Washington, D.C.-based National Alliance for Hispanic Health, which provides information and health-related assistance to Hispanic communities nationwide. “These products prey on the desperation of people who can’t afford to see a doctor or go to a legitimate pharmacy.”

The current political climate in the U.S. is also pushing some immigrants to the black market, doctors and researchers say.

“Many patients are afraid they’ll be deported if they come into our clinics, so they buy from the street, said Dr. Anjali Mahoney, the Orange County, California, regional medical director for AltaMed Health Services, a large chain of federally funded community clinics whose patients are primarily Latino.

“People are paying for something that doesn’t work and could even harm them, when they could have just as easily come to a clinic and (gotten) safe care with a doctor,” Mahoney said.

She added that every one of AltaMed’s 23 clinics in Southern California has reported problems with off-the-street medications. One Latina woman was hospitalized after taking an opiate advertised as blood pressure medicine, she noted.

These dubious products targeted by law enforcement are different from the legitimate prescription pharmaceuticals imported for personal use every year by millions of U.S. residents who cross the border into Canada and Mexico or use licensed online pharmacies abroad to buy their medications at a fraction of the price they would pay in this country.

Although those imports are also technically illegal, guidelines from the Food and Drug Administration allow federal agents to take a hands-off approach.

That’s not the case with wares peddled on the streets by often unscrupulous operators.

“Counterfeit medicines may contain the wrong ingredients, contain too little, too much or no active ingredient at all — or contain other, potentially life-threatening hidden ingredients,” said Jeremy Kahn, an FDA spokesman.

Drug companies and pharmacies also have an interest in disrupting the distribution of such medications. The nationwide value of this pharmaceutical black market is difficult to gauge, but it may displace billions of dollars’ worth of legally approved medicine, said Roger Bate, an economist at the American Enterprise Institute and author of the book “Phake: The Deadly World of Falsified and Substandard Medicines.”

The medications seized by the FDA are just the tip of the iceberg. The agency estimates it is able inspect fewer than 0.2% of the packages sent via international mail that are believed to contain drugs. And many illicit products arrive not through the mail but in suitcases, cars, trucks or cargo ships, authorities say.

The purveyors of these “dodgy medicines” are “myriad and global,” including Chinese and Indian manufacturers, Russian mobsters, Mexican gangs and domestic U.S. groups, said Bate. “There are charlatans and odious actors who don’t mind if their product kills children, adults or breadwinners of entire families.”

Nationwide, many local police departments lack the resources or mandate to investigate sales of illicit pharmaceuticals; otherwise, the number of arrests would probably be much higher, public and industry officials say.

“Not enough attention is paid to this issue,” said Jon Roth, CEO of the California Pharmacists Association. “It’s probably largely operating in the dark shadows of every community. If we put the resources there, we’d see how wide it is.”

L.A. County is one jurisdiction paying attention. In 1999, it formed the Health Authority Law Enforcement Task Force (HALT), after two Latino infants died from taking illegal medications. HALT is the group that made the August arrests.

So far this year, it has arrested 34 people in 54 cases, 48 of them involving illegal pharmaceuticals sold to immigrants, said Erick Aguilar, one of the investigators.

Illegal pharmaceuticals are being sold to immigrants in “every rural swap meet you can find,” and the sellers are becoming more sophisticated, Aguilar said. “They’re better at hiding it,” and “they’re more careful who they sell to.”

In February 2019, three men – two in Southern California and one from Salem, Oregon – pleaded guilty to the illegal importation and sale of $11 million worth of pharmaceutical-grade erectile dysfunction drugs falsely marketed across the U.S. as herbal remedies for men. One of the perpetrators imported from China powdered tadalafil, the active ingredient in Cialis, and used it to make 5.5 million pills with up to 14 times the level contained in Cialis, according to the FDA.

In 2017 and 2018, the Phoenix police department’s organized-crime commercial unit raided 30 pharmacies in Latino neighborhoods, confiscating “millions of dosages of illegal medicines, some of them outdated by 15 years,” said Detective Sgt. David Lake, who led the unit.

But not all the sellers were members of organized crime. Lake recalled one woman who genuinely believed she was doing something positive for her community by distributing black-market birth control pills.

“She said local girls were having too many babies, and she wanted to help them, but the babies kept being born,” Lake recalled. “When I told her the drugs were counterfeit, she cried for a half-hour straight.”