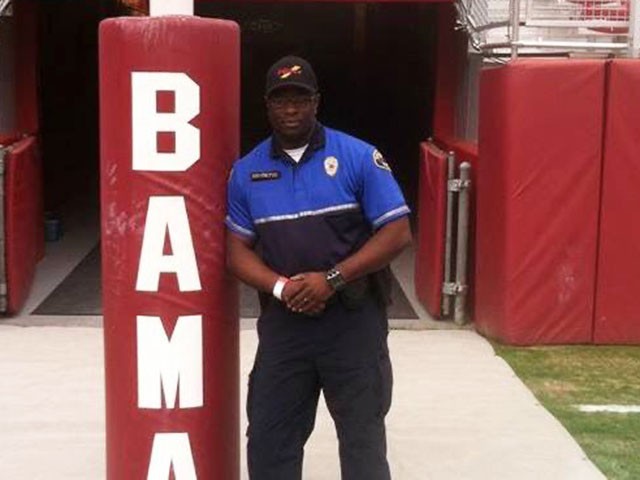 An Alabama cop from Tuscaloosa was killed while in the middle of a gunfight with a wanted felon, police said.

Dornell Cousette, 40, was a 13-year veteran of the Tuscaloosa Police Department when he was shot dead during the gunfire exchange between the suspect and the officer, according to AL.com.

“Heroes come in many different forms,” said Tuscaloosa Mayor Walt Maddox. “Tonight, one of our heroes has died in the line of duty.”

Tuscaloosa Interim Police Chief Mitt Tubbs said Cousette was following up on a tip where a suspect had failed to appear on outstanding warrants for felony crimes.

Once Cousette arrived, the suspect allegedly ran inside the house and Cousette followed him.

Gunshots went off inside the home, wounding both Cousette and the unidentified suspect.

Cousette suffered a fatal gunshot to his face and died on his way to the hospital. The 40-year-old was also the father of two daughters and was engaged to be married, ABC News reported.

The 20-year-old suspect fled after the shooting and ended up in a nearby hospital where he was arrested.

The suspect had an arrest record dating back to 2017 on charges of assault and robbery.

Cousette, who served in the Army and joined the force in 2006, is the fourth police officer in Alabama to die in the line of duty from a gunshot wound.

“Alabama has already lost three police officers to hostile fire during 2019—the greatest amount due to gunfire in a single year in our state since 2009,” Alabama Attorney General Steve Marshall told AL.com.