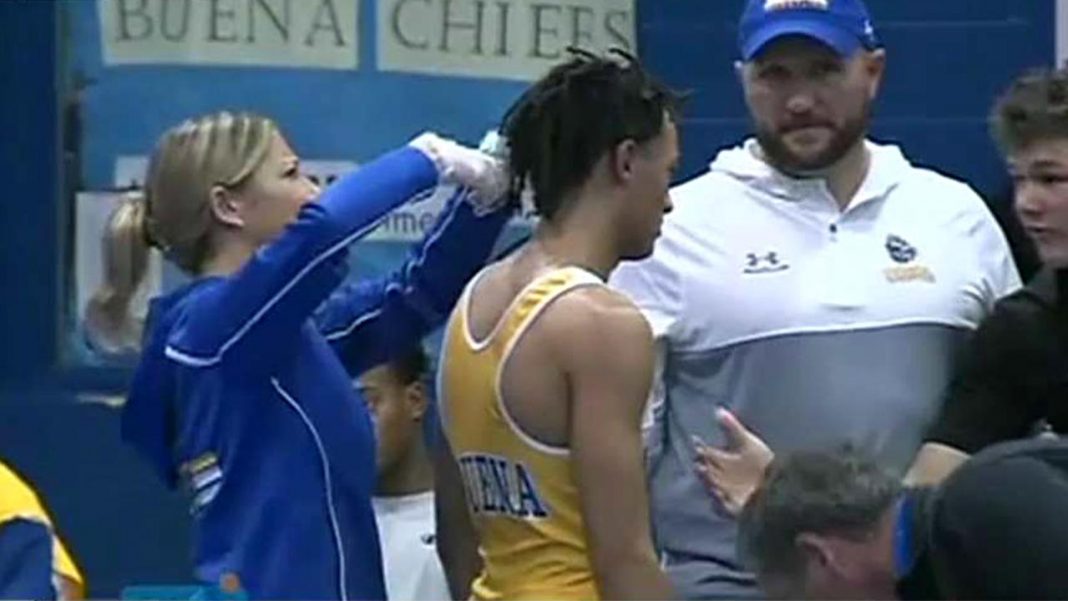 A New Jersey high school referee was handed a two-year suspension on Wednesday after he forced a teenaged wrestler to cut off his dreadlocks moments before a match to avoid forfeiting it.

The New Jersey State Interscholastic Athletic Association (NJSIAA) launched an investigation into the incident in conjunction with the state’s Division on Civil Liberties (DCR) after a video of 16-year-old Buena Regional High School wrestler, Andrew Johnson, went viral on social media. Johnson, who is of mixed race, was on the mat and in uniform before a match on Dec. 19, 2018 when he was ordered by a white referee, Alan Maloney, to have his dreadlocks cut off or be barred from competing in the wrestling tournament.

Maloney determined that Johnson could not wrestle without a hair cover, citing a National Federation of State High School Associations (NFHS) rule that places restrictions on the length of an athlete’s hair and when an athlete must wear a hair cover. The rule had previously been interpreted by various New Jersey wrestling officials to require a hair covering for several traditionally black hairstyles regardless of hair length but the teenager was not able to locate a hair cover that met the rules’ specifications, according to a press release by the state’s attorney general.

Johnson, who appeared visibly upset in the video and received high fives from other teammates and wrestlers present, opted for the impromptu haircut and went on to win the match.

The video sparked outrage from many, with Olympic gold medalist Jordan Burroughs calling the incident “an abuse of power, racism, and just plain negligence.”

“Today’s Joint Agreement brings an end to our investigation of the December 19, 2018 incident at Buena Regional High School. The NJSIAA Task Force, working cooperatively with the New Jersey Division on Civil Rights, thoroughly investigated the facts of that day’s incident, as well as the language and interpretation of the wrestling hair-length rules,” NJSIAA executive director Larry White said in a statement Wednesday.

“As a result of the investigation, those rules have changed. We are confident that those changes, together with the training programs NJSIAA will be developing in collaboration with DCR, will ensure that a situation like this does not happen in the future.

“The NJSIAA’s mission includes fostering a safe and healthy playing environment for student-athletes, providing training for school administrators, coaches and officials, and making sure that rules promote fair play. Today’s Joint Agreement helps advance each of those goals.”

In addition to the referee’s suspension, NJSIAA will provide implicit bias training to all high school sports officials in New Jersey.

The DCR also issued new training materials titled “Guidance on Race Discrimination Based on Hairstyle,” which specifically stipulates that any policy that bans, limits or restricts hairstyles “inextricably intertwined with or closely associated with race,” such as twists or locs may violate New Jersey law.

“Discrimination against Black people because of their hair, which is often based on stereotypes that traditionally Black hairstyles are ’unprofessional‘ or ’unkempt,’ is a persistent form of anti-Black racism,” DCR director Rachel Wainer Apter said in a statement. “This guidance makes clear that employers, housing providers and places of public accommodation cannot police Black hair. And the MOA will ensure that high school athletes across the State can focus on being their best, not worrying that their hair will subject them to differential treatment based on race. We are grateful to the NJSIAA for their hard work on this Agreement.”

Attorney General Gurbir Grewal also condemned racism of any kind saying “Student athletes should be able to compete with each other on a level playing field.”

“Racial discrimination in the enforcement of the rules of any sport is inconsistent with the spirit of fair play. The Division on Civil Rights’ action today makes it less likely that any student athlete will have to endure discrimination that not only undermines fair competition but also violates our state laws.”