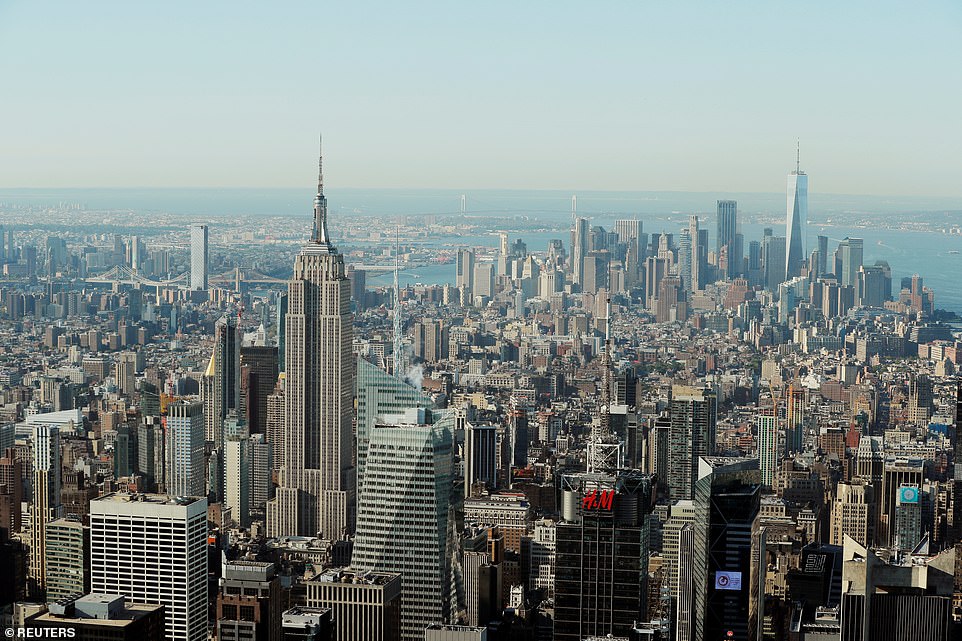 The skyscraper had its ‘topping off’ ceremony on Tuesday to celebrate the structure reaching its maximum height as it looms over Billionaires’ Row. It will be opened in 2020.

Apartments now listed on the tower’s website range from $6.9million for a 33rd floor, two-bedroom place, to $63million for a five-bedroom penthouse on the 112th floor.

Spectators at the ceremony on the 107th floor looked over the length and breadth of Central Park and cast their eyes south, over Times Square and down to One World Trade Center.

It will feature ‘the world’s most exclusive club’ with a 60ft outdoor pool, sundecks and luxurious cabanas for its super-rich residents.

The Club, spread across 50,000 square feet, will provide a five-star beverage service so that home owners can cool off during the summer, as well as a spa offering massages, facials and body treatments throughout the year.

The largest penthouses, known as Duplex Residence Grand Salons, provide wall-to-wall views over the city and disguised structural elements to limit any impact on the panorama.

Scroll down for video. 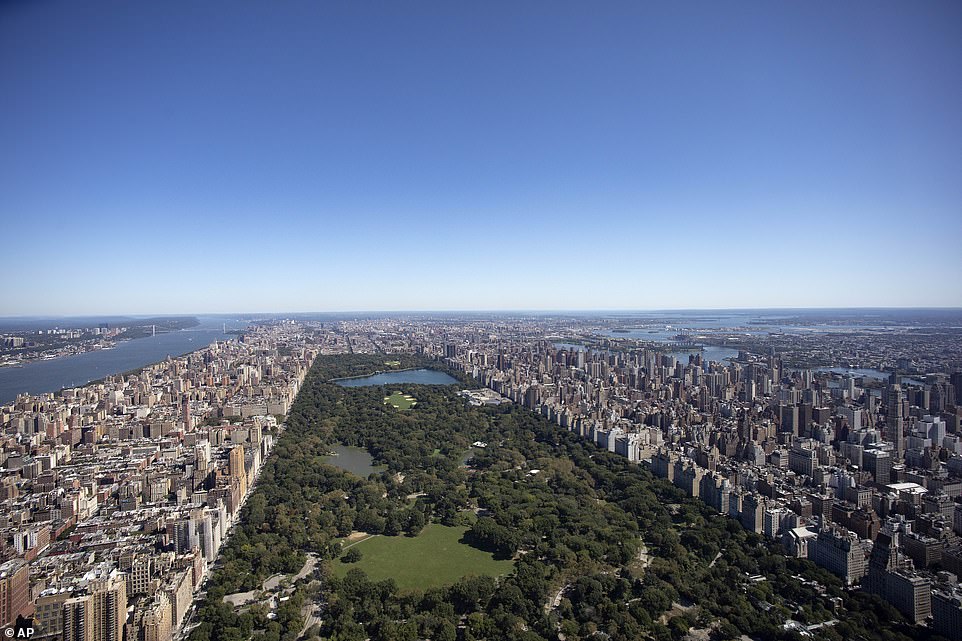 The building, just a short distance from Central Park, provides unrivaled views of Manhattan’s legendary 850 acre green space and its panoramas were presented to the world during a ceremony to mark its ‘topping off’ on Tuesday 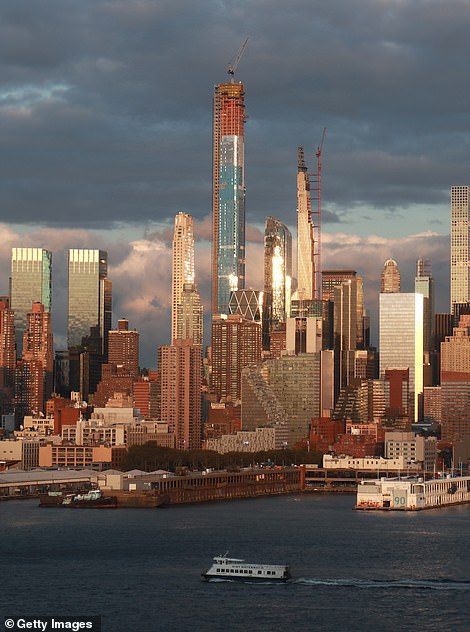 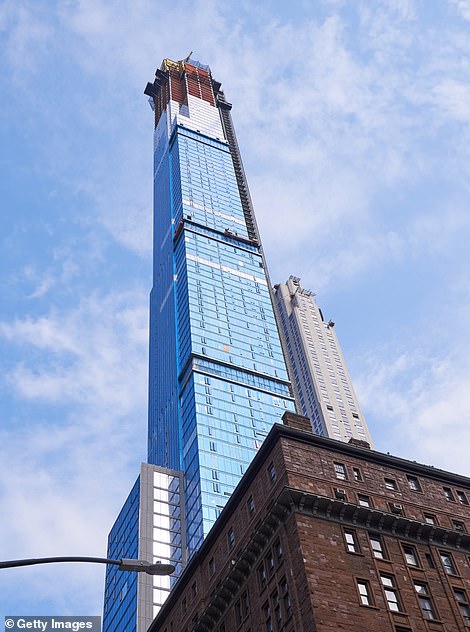 A view over midtown Manhattan shows New York’s Central Park Tower rising during its construction and last month, as it soared towards its final height of 1,550ft, which was celebrated at its ‘topping off’ ceremony on Tuesday. The building will officially open in 2020 (pictured: the tower in August, left and right) 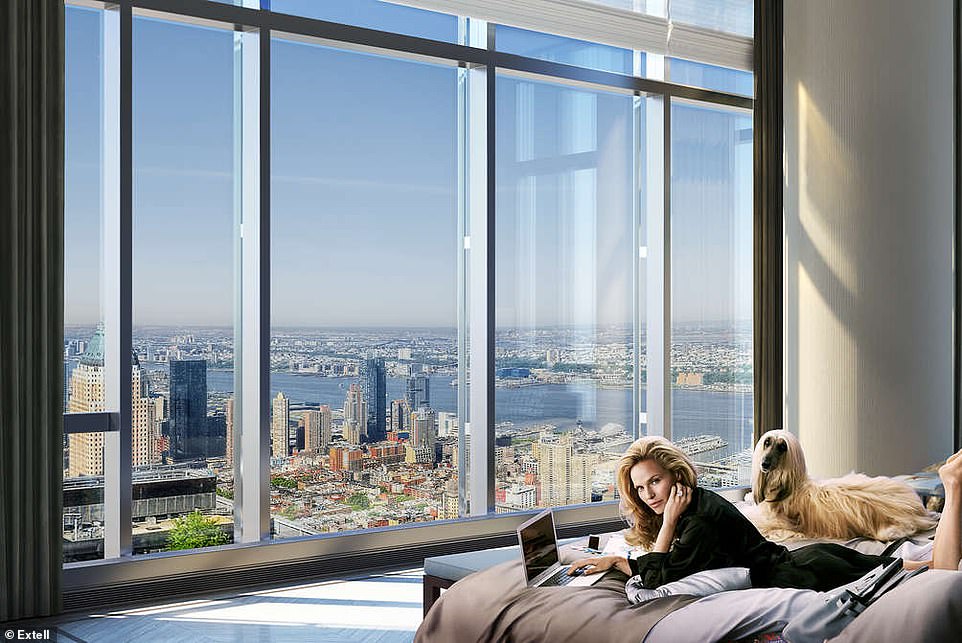 Apartments now listed on Central Park Tower’s website range from $6.9 million for a 33rd floor, two-bedroom to $63 million for a five-bedroom penthouse (pictured: a woman relaxes with an Afghan Hound inside a luxurious apartment in demonstration pictures released by Extell Development Company) 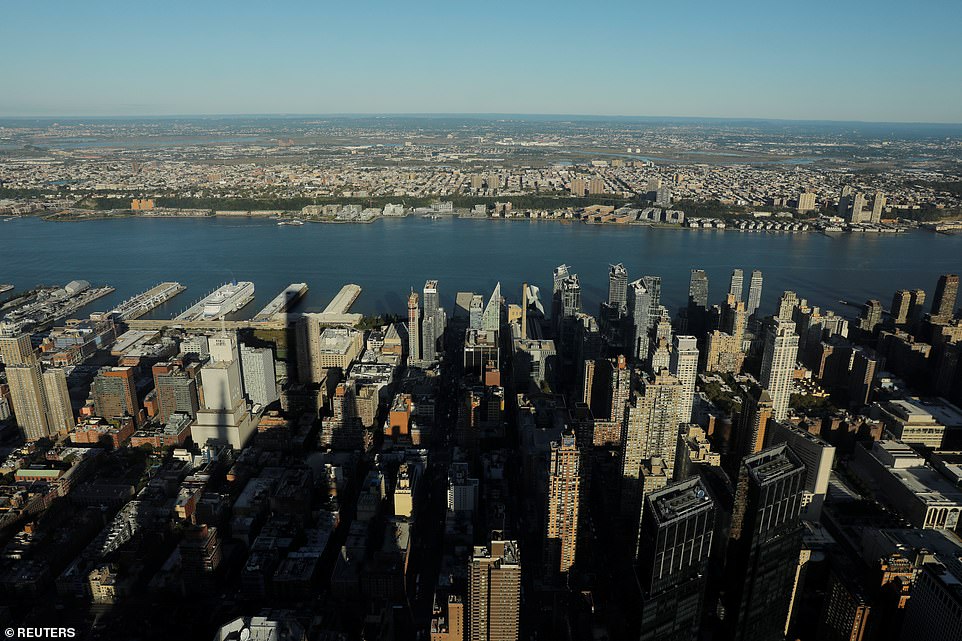 The shadow of the Central Park Tower stretches over the west side of Manhattan as seen from the window of the building as it celebrates its topping out in New York.  Critics have complained the tall, skinny towers proliferating along the southern edge of Central Park over the last few years are casting shadows on the park

‘These fine homes have been meticulously designed to maximize views and light with expansive dimensions and soaring ceiling heights.

‘The strikingly appointed master bathrooms at Central Park Tower are offered in both dark and light schemes and are finished with the finest imported stones, custom millwork and premium fittings and fixtures.’

‘We have to price it at a reasonable range for this type of product,’ he said. ‘And we have to be flexible when we’re selling the really large units.’

Curtains dropped on Tuesday as Barnett presided over the topping off ceremony, pushing a button to reveal panoramic views from what will be someone’s 107th-floor living room. 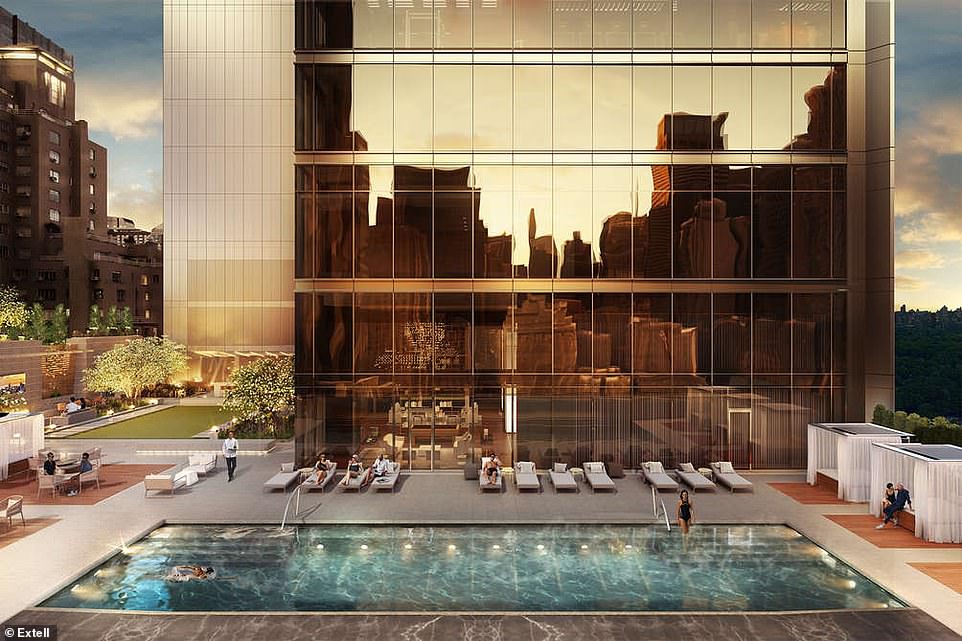 It will feature ‘the world’s most exclusive club’ with a 60ft outdoor pool, sundecks and luxurious cabanas for its super-rich residents (pictured: a computer generated image of the outdoor terrace for The Club) 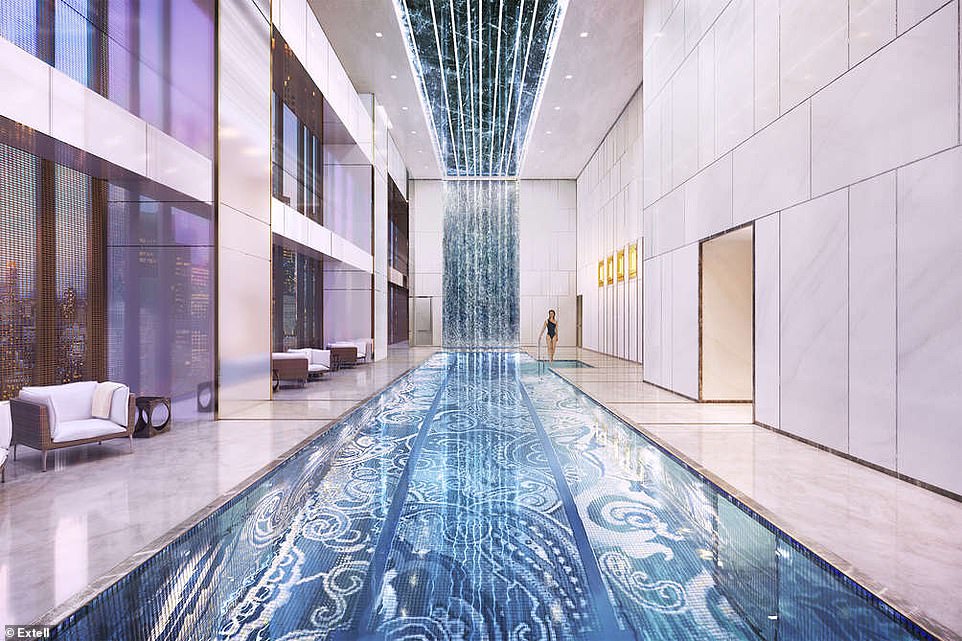 The Central Park Tower says on its website: ‘The fitness and wellness program at Central Park Club has been developed in collaboration with renowned fitness experts and operators. The Club’s spa will offer restorative treatments including massages, facials and body treatments’ (pictured: a computer generated image of a pool in the indoor spa) 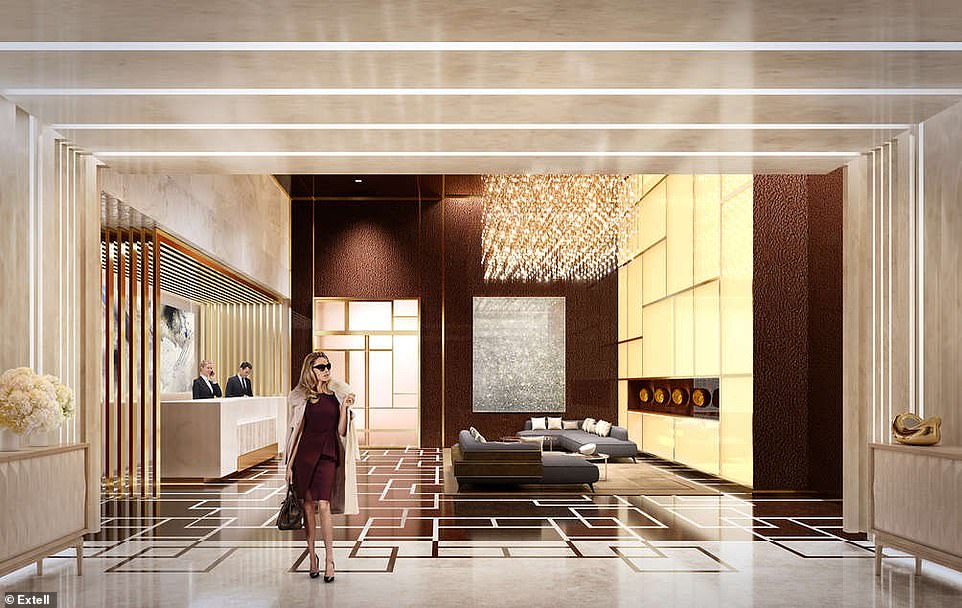 An opulent lobby within Central Park Tower in this digital representation of the finished building. The largest penthouses, known as Duplex Residence Grand Salons, provide wall-to-wall views over the city and disguised structural elements to limit any impact on the panorama. 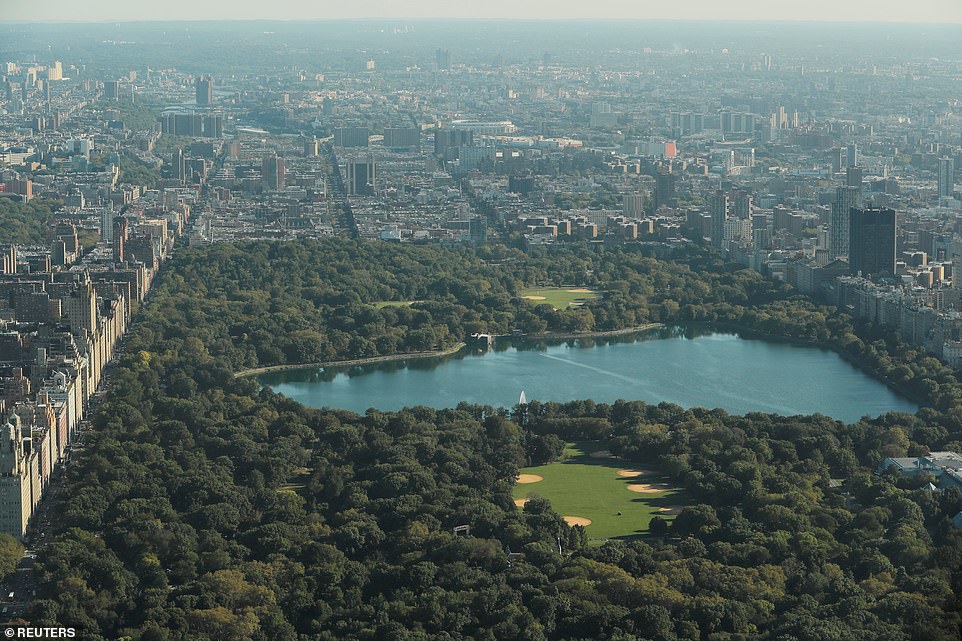 Gorgeous views over Central Park were seen on Tuesday from the building’s 107th floor during the ceremony to celebrate the roof reaching its ultimate height of more than 1,500ft. The colossal tower sits on Manhattan’s Billionaires’ Row and will be opened next year 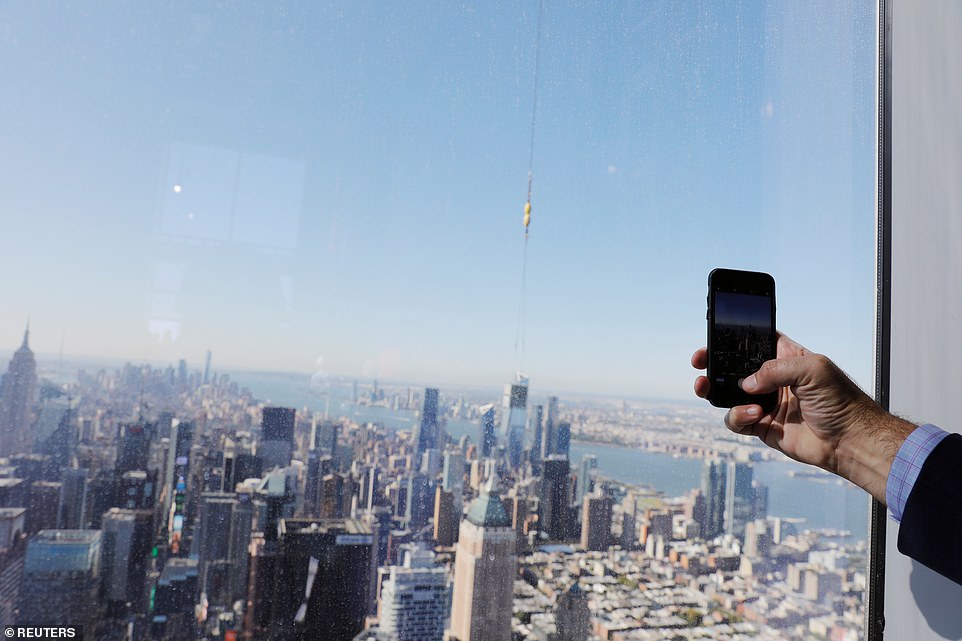 A man takes a photo of the stunning views over the south side of Manhattan during the topping off ceremony on Tuesday, as a chain can be seen dangling from a crane in the near distance 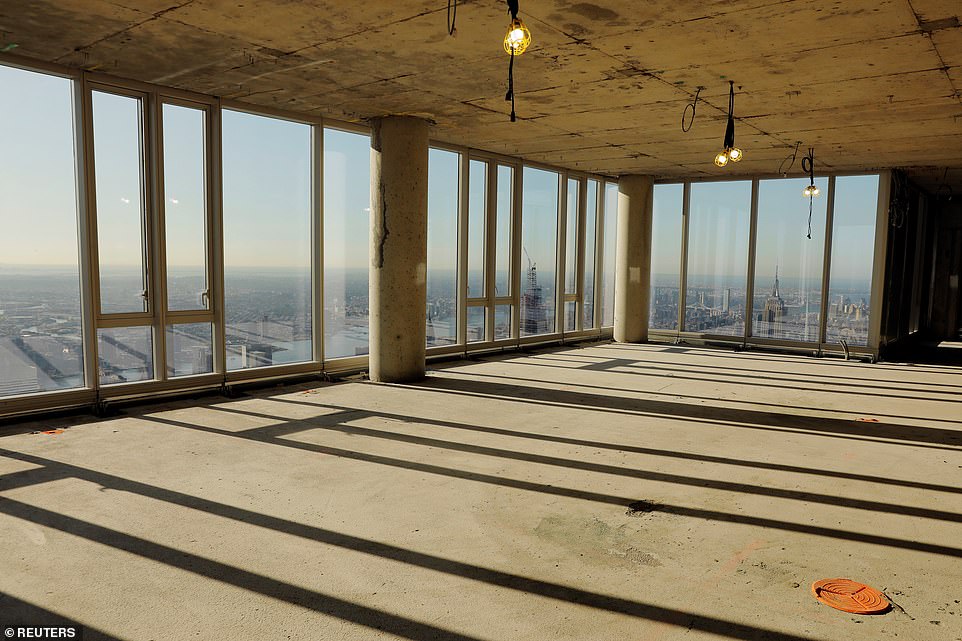 All of Central Park was visible, as were landmarks like the Chrysler Building and the George Washington Bridge. One block east was the huge crane helping to build 111 West 57th Street, a rival super-tall tower that’s also scheduled to open next year.

Critics have complained the tall, skinny towers proliferating along the southern edge of Central Park over the last few years are casting shadows on the park, but Barnett dismissed those concerns.

‘We’ve done shadow studies,’ he said. ‘It’s just a question of, you know, occasionally somebody might be sitting somewhere in the park and there’ll be a shadow for, I don’t know, 20 or 30 minutes.’

Extell secured the right to build Central Park Tower by buying 6,000 square feet of ‘air rights’ from surrounding buildings. Its 1,550-foot height makes it even taller than One World Trade Center without its crowning spire.

The Council on Tall Buildings measures One World Trade Center’s height as 1,776 feet, a tally that includes the spire. 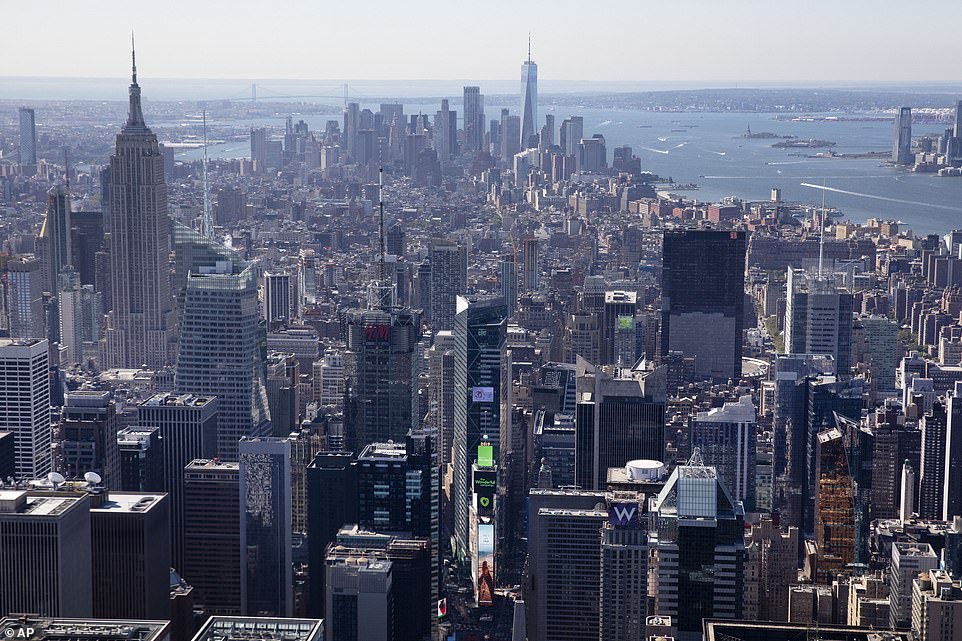 Times Square is seen in the lower center of this view from the Central Park Tower, the Empire State – which stands around 250ft lower than the new structure – is sen on the left and the One World Trade Center or Freedom Tower is in the far distance in Manhattan’s downtown financial quarter 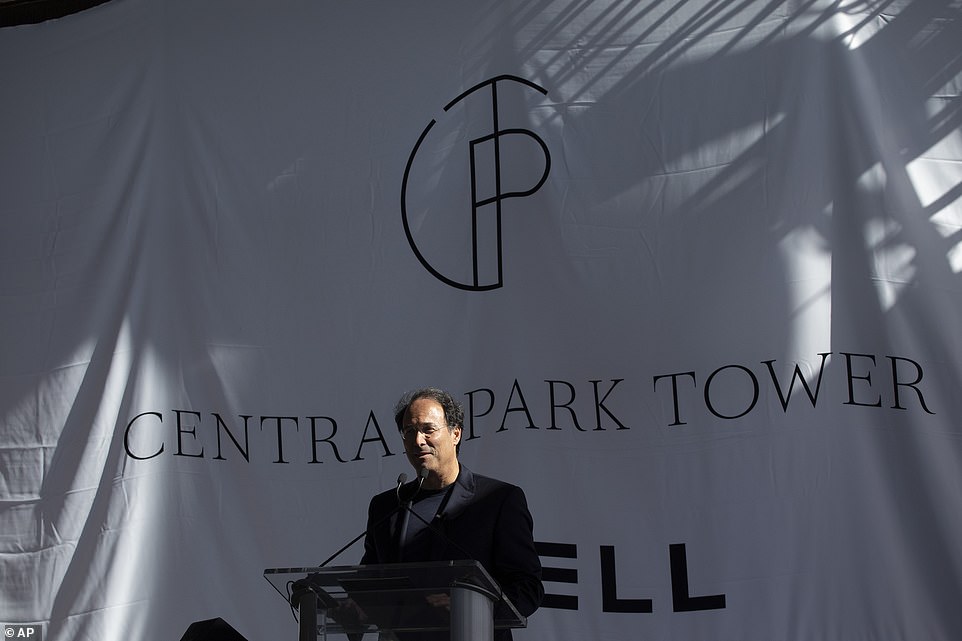 Gary Barnett, owner and founder of Extell, speaks at the topping out ceremony for the Central Park Tower, he dropped a curtain to reveal panoramic views from what will be someone’s 107th-floor living room 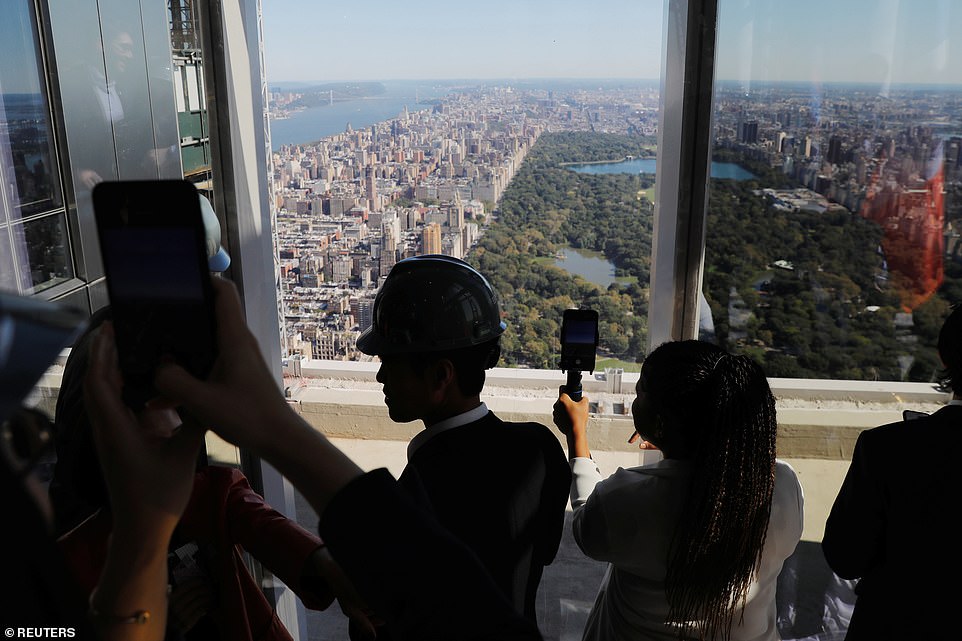 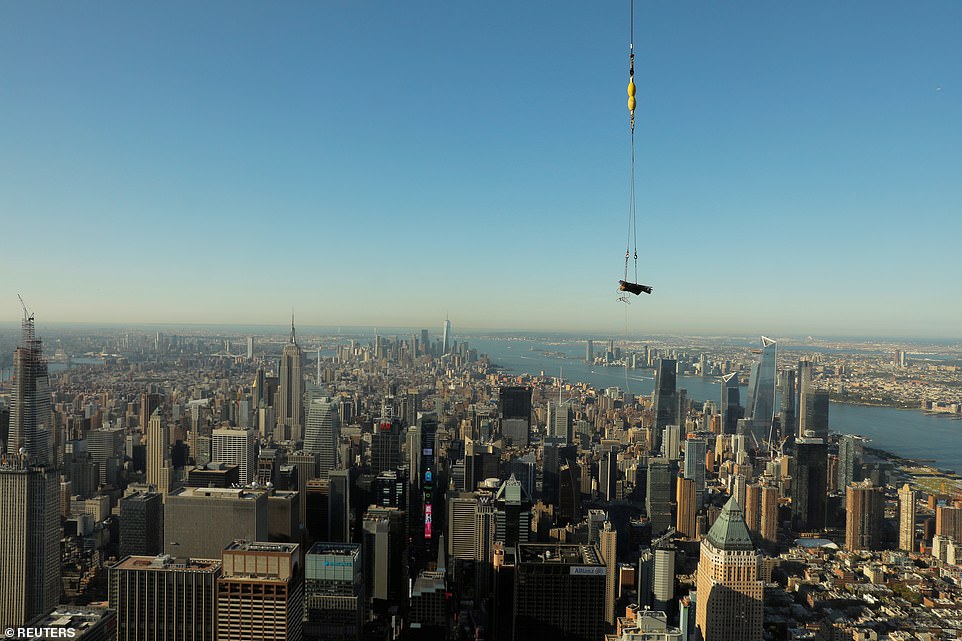 The Manhattan skyline from the 107th floor of the new tower, including the Empire State Building and One World Trade Center in the far distance 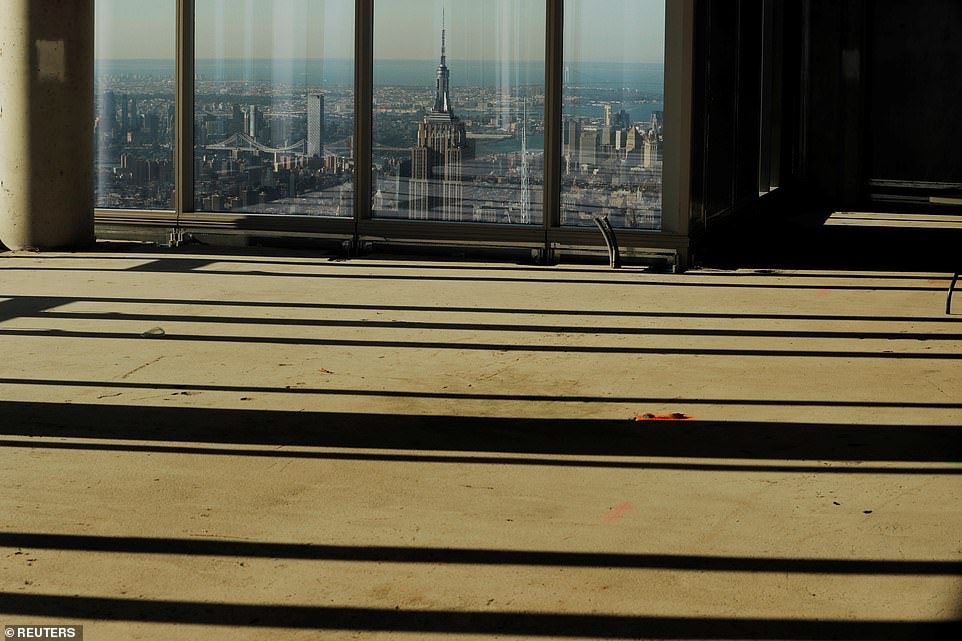 The top of the Empire State Building can be seen through the window, sitting some 200ft below the height of the new tower 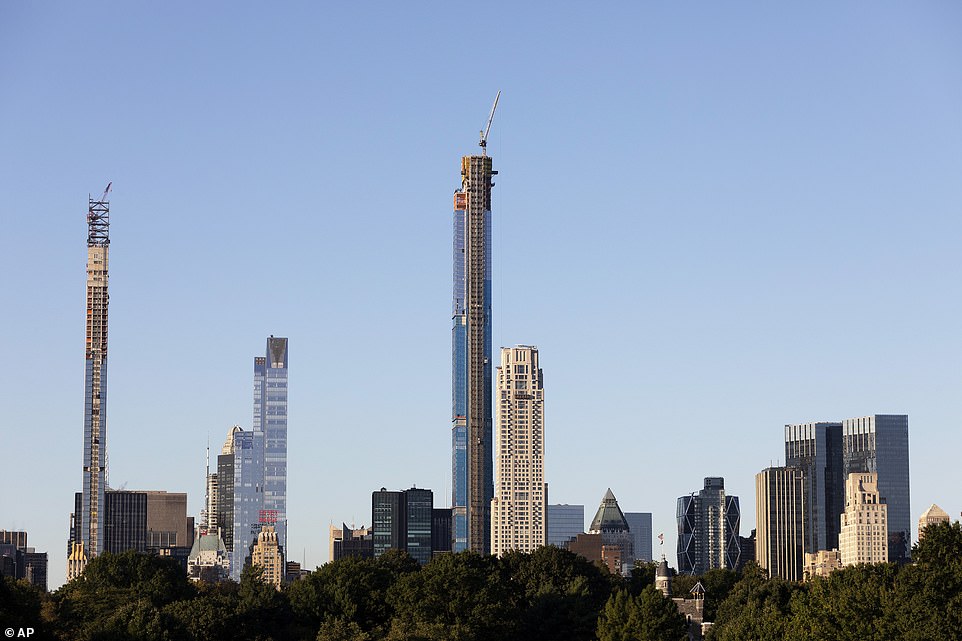 The Central Park Tower (center) under construction on Tuesday, much of the building is still waiting to be covered in an outer layer of blue tinted glass

Central Park Tower will be the world’s tallest building that is mostly residential, although there are other buildings with a residential component that will be taller.

Extell’s partners in the project include Nordstrom, which is building a seven-story department store at the building’s base.