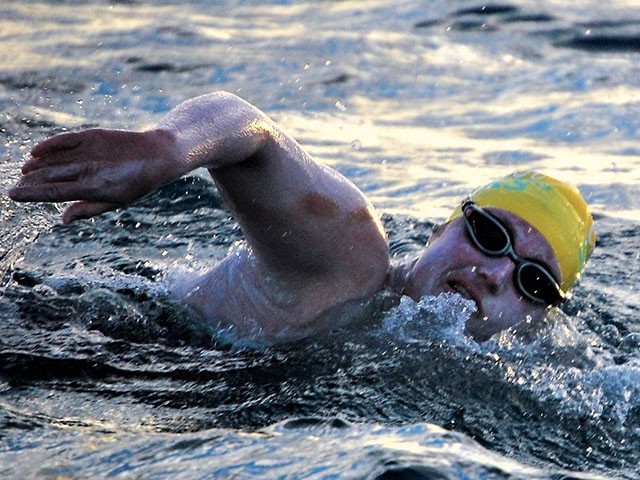 An American cancer survivor is the first person in the world to swim the English Channel four times nonstop.

Sarah Thomas, a Colorado resident who swims in open-water marathons, broke the world record Tuesday morning at around 6:30 a.m. more than 54 hours since she started swimming from the English port city of Dover.

After all was said and done, she completed 133 miles of swimming in 54 hours and 13 minutes.

The exhausted swimmer was pictured celebrating the achievement with a glass of champagne and some M&Ms.

“I just can’t believe we did it. I’m really just pretty numb,” the 37-year-old open-water swimmer told BBC News. “There was a lot of people on the beach to meet me and wish me well and it was really nice of them, but I feel just mostly stunned.”

Thomas received a breast cancer diagnosis less than two years ago and underwent treatment for it for several months. She had been a long-distance swimmer before her diagnosis and got back in the water as soon as she was healthy enough.

Thomas’s achievement comes just one year after she completed her breast cancer treatment.

“Yes, I’m scared. The Channel can do a lot of crazy things and for this to happen, we’re going to need some luck,” Thomas wrote on Facebook on Saturday before embarking on her journey.

“But, hopefully between the preparation I’ve done and the experience of my crew and boat captain, we can get this done together,” she wrote.

A GPS-equipped boat followed Thomas as she swam to monitor wind, tides, and currents. The ship also had a crew, which included her mother, her husband, and several other swimmers to cheer her on and make sure she stayed nourished throughout the journey.

Thomas would take 30- to 60-minute breaks from swimming to refuel with a steady diet of protein drinks and her favorite snack of M&Ms.

“She’s very tired and rightly so,” Eddie Spelling, the captain of the escort ship, told NBC News in a phone interview not long after Thomas completed her last lap. “America should be proud. It’s the best thing that I’ve ever seen.”

This is not the first time Thomas has swam across the English Channel. She first completed a channel crossing in 2012, which took her 11 hours and 22 minutes.