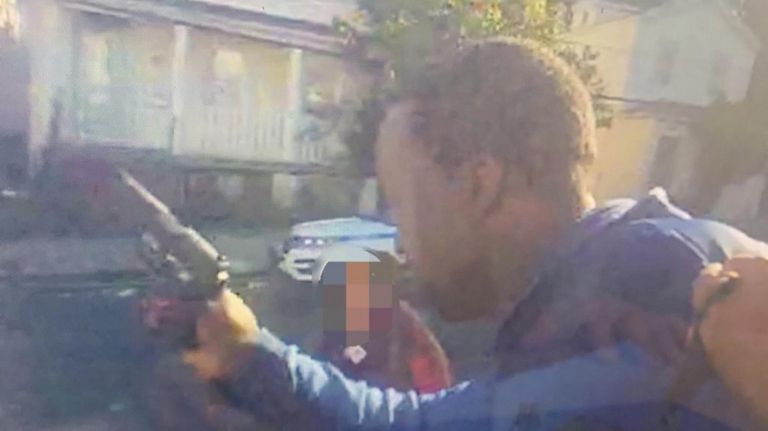 An NYPD cop was shot in the hand in a struggle with a domestic violence suspect, who was later killed by an officer, on Staten Island Tuesday morning, Commissioner James O’Neill said.

The female officer was one of four attempting to arrest the suspect after police received an 8:20 a.m. call from a woman reporting that she was the victim of a past domestic assault, O’Neill said.

The woman had pointed the 39-year-old man out to officers when they responded.


The suspect, who has a criminal history and previously served five years in prison for a shooting, became “combative” with the officers when they tried to place him under arrest near Prince Street and Mickardan Court in Clifton, the commissioner said.

One officer deployed a Taser, hitting the man in the back, but the man then pulled out a gun.

“The officers, showing no hesitation, grabbed his hands to direct the muzzle away from everyone,” O’Neill said.

The man fired twice and one of the officers returned fire, striking the man, O’Neill said. The officer fired three times.

Editors’ picks of our best stories, right to your inbox.

The suspect was pronounced dead at the scene. In the exchange of gunfire, the female officer was hit in the left hand, but whether she was struck by a bullet from the other officer or the suspect was under investigation.


The officer was taken to Richmond University Medical Center, where she was undergoing surgery on her hand.

Mayor Bill de Blasio, who was at the hospital with O’Neill, said the officer “acted heroically, bravely, professionally.

“Our officer did everything that she was trained to do, put herself in harm’s way and did an exemplary job,” said.

The officer, who joined the force in 2016, came to the country as a young girl and always wanted to be a police officer, de Blasio said.

“She has applied herself with all her heart to this work, protecting others, and it’s quite clear, when you see all the facts today, of how devoted she is to her work,” he said.

Nicole Brown is the Internet News Manager at amNY.com, covering local news since 2016. She has written for MSNBC.com and was editor-in-chief of NYU’s Washington Square News.