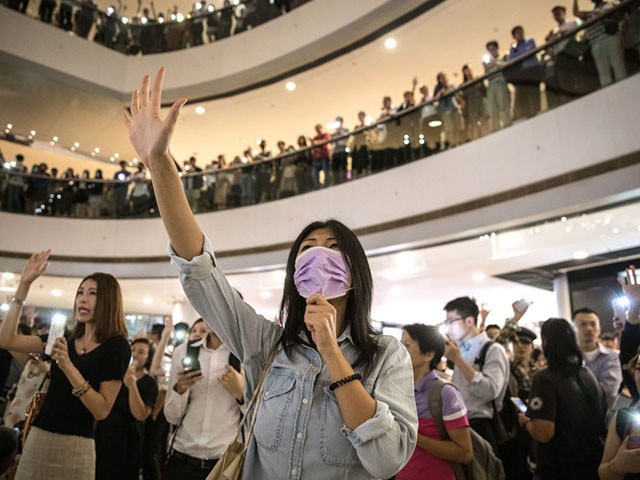 Chinese business executives revealed to Reuters on Thursday they were summoned earlier in the week to a meeting in Shenzhen, the city closest to Hong Kong, and urged to invest more heavily in Hong Kong so they could help the Chinese Communist Party exert more control over the city.

According to Reuters’ sources, the state-owned enterprises (SOEs) were urged by agents of China’s State-owned Assets Supervision and Administration Commission (SASAC) to invest in key Hong Kong industries, including real estate and tourism, to create more jobs for Hong Kong residents and “stabilize” both the markets and political situation.

Among the attendees at the meeting were enormous state-run corporations like the Sinopec oil company and the China Merchants Group, plus a number of corporations involved in China’s huge international infrastructure program, the Belt and Road Initiative.

Reuters reported these companies were explicitly told to use their very deep pockets to exert more control over Hong Kong:

Instead of simply holding stakes in Hong Kong companies, the Chinese SOEs were also urged to look to control companies and have decision-making power in them, one of the people familiar with the meeting said.

“The business elites in Hong Kong are certainly not doing enough. Most of them are just not one of us,” the SOE executive who was at the meeting told Reuters.

SASAC’s Communist Party chief, Hao Peng, appeared in Hong Kong on Wednesday at a forum for the Belt and Road infrastructure initiative and said that SOEs were looking for ways to cooperate in major projects in the city, according to a SASAC news release.

Hao, who was accompanied by a group of SOE executives, also met with Carrie Lam, the city’s chief executive.

Chinese state media reported on a similar meeting last month in which Hong Kong business leaders and politicians aligned with Beijing were encouraged to “have no fears and stand up” to the protest movement. Hong Kong’s top tycoons called for an end to the protests after collectively losing over $15 billion, but many of their employees remain supportive of the movement and view economic disruption as a means of forcing the government to address their demands.

Reuters noted that China has not been shy about squeezing corporations to act against the protest movement or at least refrain from supporting it in any way, with Hong Kong’s premier airline, Cathay Pacific, serving as a dramatic example. The corporation that runs Hong Kong’s metro rail service has also responded to pressure from Beijing, to the dismay and anger of pro-democracy activists.

The Wall Street Journal observed on Friday that for all of China’s talk about building up Shenzhen or Shanghai as a replacement for unruly Hong Kong, the city still plays an indispensable role in China’s relationship with the global economy. Hong Kong’s autonomy and the special rights granted by its “Basic Law” allow Beijing to take a firmer hand everywhere else, making Hong Kong a readily accessible lobby where foreigners can do business with confidence while China’s other cities are locked down and tightly controlled.

Beijing and its loyalists in Hong Kong have been warning protesters their continued activities will disrupt the economy and drive away businesses. According to a study published on Friday, a sizable number of enterprises are thinking about pulling out of Hong Kong if unrest continues, but only a few have made firm plans to relocate, and almost all of them are looking at Singapore, not Shenzhen or Shanghai.

The Hong Kong industry hit hardest by the protests is clearly tourism, with tourism from China falling by almost 90 percent over the past year according to some studies. This could make investing in tourism a hard sell to Chinese SOEs, but, on the other hand, they might see doing everything they can to stabilize the political system and repair the hospitality industry as a necessary investment.