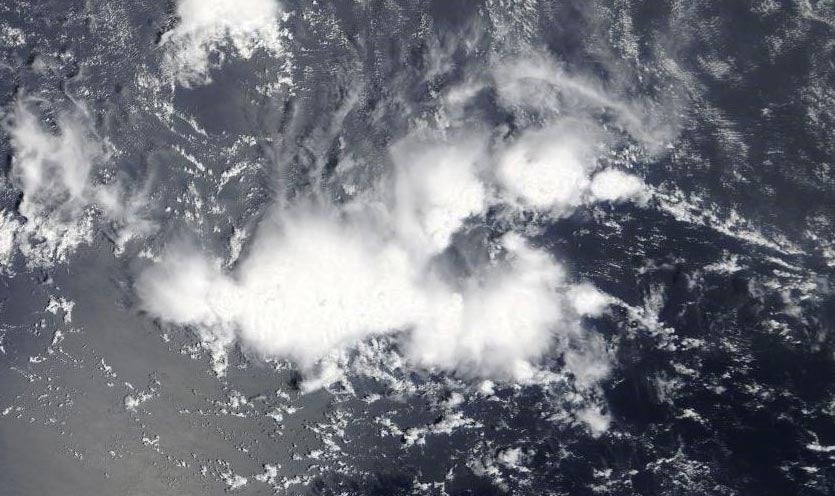 An area of disturbed weather (95L) over the southeast and central Bahamas is growing more organized and is likely to form into a tropical depression or tropical storm by Saturday as it heads northwest at 5 – 10 mph towards Florida. The system was bringing heavy rain showers and strong winds to the southeast and central Bahamas on Thursday; Blue Lagoon Island, near Nassau, recorded sustained winds of 29 mph, gusting to 32, at 8:10 am EDT. A hurricane hunter aircraft is scheduled to investigate 95L on Thursday afternoon, if needed. The next name on the Atlantic list of storms is Humberto.

Satellite loops and data from the Bahamas radar on Thursday morning showed that 95L did not have a well-defined surface circulation, but heavy thunderstorm activity was steadily growing in intensity and areal coverage. The system was tangled up with an upper-level trough off the west coast of Florida, and the upper-level winds associated with this trough were bringing dry air and moderate wind shear of 15 – 20 knots to 95L, inhibiting development. These upper-level winds were also acting to help ventilate 95L, though, creating an impressive upper-level outflow channel to the north. Sea surface temperatures (SSTs) in The Bahamas, though depressed by the passage of Hurricane Dorian, were still plenty warm for development–near 29°C (84°F).

One of the larger shifts I’ve seen in a 72h forecast. The deterministic run was NOT an outlier. pic.twitter.com/izOE9Sj7MF

A significant change to the forecast for 95L

The forecast models for 95L changed significantly with their 0Z Thursday runs, and it is no longer the consensus that 95L will continue to the northwest across Florida and into the Gulf of Mexico over the weekend. The 0Z and 6Z Thursday runs of the GFS model still maintain that forecast, but the 0Z Thursday runs of the European and UKMET models now predict that 95L will consolidate farther to the north, over the central Bahamas, then take a track very similar to Hurricane Dorian’s–north-northwesterly, shifting to northeasterly, following the curve of the Southeast U.S. coast at a distance of 100 – 200 miles offshore.

Given this large and sudden shift in the guidance for 95L, its future course has very high uncertainty. It will be highly dependent upon where and when the center ultimately forms, and that location could be anywhere within a 100-mile radius of the south-central Bahamas. A quicker-forming and more intense system would be more likely to stay offshore of Florida and recurve to the north and then northeast; a weaker and slow-to-consolidate system would be more likely to be steered by the low-level trade winds and move northwest across Florida and into the Gulf of Mexico. The main thing we are sure about at this point is that 95L will bring regions of heavy rains of 2 – 4” over the next two days to The Bahamas, including the islands devastated by Hurricane Dorian.

A tropical wave located on Thursday morning a few hundred miles west of the Cabo Verde Island was headed west at about 20 mph. This wave, which had not yet been given an “Invest” assignment by NHC, had a good deal of spin and a modest amount of heavy thunderstorm activity that was slowing increasing in intensity and areal coverage on Thursday morning, as seen on satellite imagery. Conditions appeared favorable for slow development, with moderate wind shear of 10 – 15 knots, marginally warm SSTs near 27°C (81°F), and a moist atmosphere.

The tropical wave is predicted to take a track mostly to the west over the coming week, and could arrive in the Lesser Antilles Islands as early as Monday. The wave will benefit from the moister atmosphere that 94L has created in its wake, and recent runs of our three top models for predicting tropical cyclone genesis—the GFS, European and UKMET—continued to predict that the system could develop 4 – 7 days from now, after reaching the Caribbean Sea. In their 8 am EDT Thursday Tropical Weather Outlook, NHC gave the wave 2-day and 5-day odds of development of 0% and 40%, respectively.

Would Frank Sinatra Have Been a Deplorable?