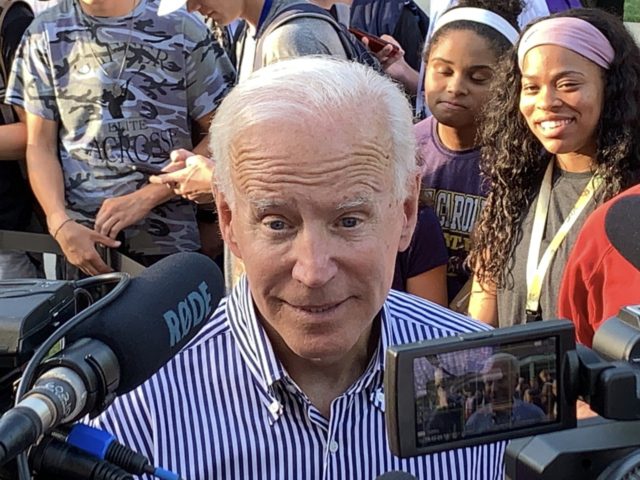 A top official of the Democrat National Committee (DNC) may have violated his organization’s neutrality standards in order to save former Vice President Joe Biden from an embarrassing incident.

Ken Martin, the DNC’s vice chair and the president of the Association of State Democratic Committees, allegedly “bawled” out a liberal activist at the New Hampshire Democrats State Convention last week for handing out fliers critical of Biden. The incident was first recounted by Norman Solomon, the activist on the receiving end of the Martin’s animosity, for the liberal blog Common Dreams.

“Ken Martin was angry that my colleagues and I were handing out a flier—providing some inconvenient facts about Joe Biden—to delegates and activists as they entered the New Hampshire Democratic Party convention,” Solomon, a longtime activist and the founder of RootsAction.org, wrote.

The flier, a copy of which was obtained by Breitbart News, highlights a number of controversial stands the former vice president has taken over the span of his 40-year political career. Included are quotes from Biden on issues like banking regulation, criminal justice, and busing to desegregate public schools, among others.

Martin, who also serves as the chairman of the Democratic-Farmer-Labor Party of Minnesota, was purportedly incensed over the fliers and chose to confront Solomon over their distribution.

“He heatedly told me that distributing such a flier was divisive and would harm the cause of defeating Donald Trump,” Solomon wrote.

It is unclear how distributing a flier criticizing Biden to an audience of Democrats could be construed as harmful to a general election campaign more than 14 months away. As Solomon, himself, attempted to explain, his actions were only aimed at increasing transparency in the primary process.

I tried to assure Martin that I’m as eager to defeat Trump as anyone. At the same time, we need primaries for good reasons—including fact-based scrutiny of candidates’ records before they’re nominated. However, I found it difficult to get words in edgewise, as Martin continued to denounce the leafleting.

If the incident did occur as described by Solomon, then Martin is likely to have violated the strict neutrality guidelines the DNC and its chairman, Tom Perez, issued in December 2018. The rules, which arose after the organization was accused of improperly favoring Hillary Clinton in 2016, are meant to “ensure the impartiality and evenhandedness of the DNC staff during the presidential nominating process.”

“The new DNC is committed to making sure that our 2020 nominating process is fair and transparent,” Perez said when unveiling the guidlines. “These new policies will help ensure that there is no perception of partiality by the DNC during the campaign for the Democratic nomination.”

Specifically outlined in the rules are prohibitions on DNC members “criticizing, endorsing, or showing a preference towards” any presidential candidate. Furthermore, DNC officers and staff are “expected to avoid impropriety or any appearance of impropriety.”

It is likely Martin’s decision to confront Solomon in New Hampshire was to the benefit of Biden and therefore showed a candidate preference or at least gave the “appearance of impropriety” on the vice chair’s behalf.

Neither Martin nor the DNC returned requests for comment prior to press time.

The issue comes into the spotlight ahead of the third Democrat presidential debate on Thursday. The debate, like most of them to date, has been controversial because of the rigorous requirements the DNC has set for qualification.

In particular, the organization has been accused of attempting to protect frontrunners like Biden by “stifling debate.” A few of the lower-tier candidates, such as former Rep. John Delaney (D-MD), have even gone to the extent of alleging that the “DNC is trying to pick the candidate.”

The entire situation has drawn comparison to 2016, when DNC officials acted in a manner that was seen as beneficial to Clinton over her progressive challenger, Sen. Bernie Sanders (D-VT). Suspicion of collusion between the two camps was confirmed when Wikileaks published hacked emails showing then-DNC chair Donna Brazile fed questions to Clinton ahead of a primary debate.

Biden, for his part, has dismissed the notion of any preferential treatment on the DNC’s behalf, claiming the organization’s process for governing the 2020 primary is impartial.

“It’s fairer than anything that’s ever occurred in electoral presidential politics that I’m aware of,” the former vice president said recently during a campaign swing through South Carolina.