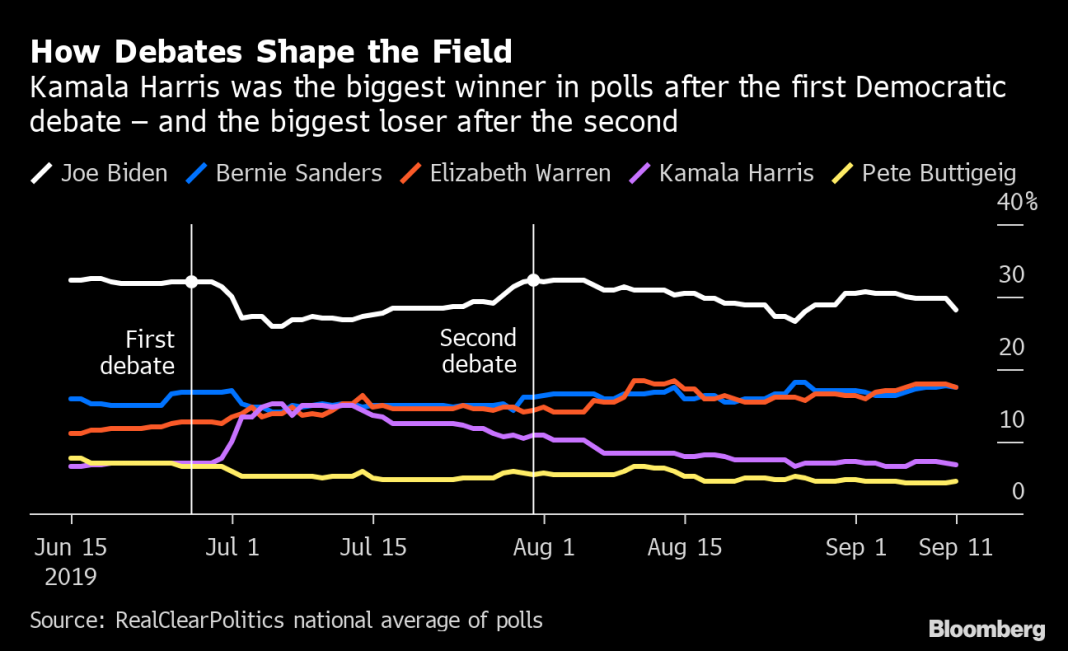 (Bloomberg) — The third Democratic primary debate on Thursday will have a different chemistry than the two before it: Fewer elements, but a potentially more volatile mix.

The event in Houston will be the first time the top 10 candidates will appear on the same debate stage.

By virtue of his big national polling lead, Joe Biden will take center stage, flanked by Elizabeth Warren to his left and Bernie Sanders to his right. It will be the first time Biden and Warren have appeared together at a debate.

And the context has changed in the six weeks since the Democratic debate in Detroit: Two major mass shootings, a televised town hall on climate change and more hints of a recession on the horizon.

The first two rounds of debates featured 20 candidates over two nights, with two hours each night. The third will be more of an endurance test: 10 candidates debating for three hours. The event at Texas Southern University will be broadcast on ABC stations – and in Spanish on the Univision network – from 8 p.m. to 11 p.m. Eastern Time.

In campaign appearances and through aides, many of the candidates have already telegraphed their strategies:

Biden expects to defend the record of the Obama administration – which he has rebranded the Obama-Biden administration – against charges from the rest of the field that it wasn’t liberal enough on immigration, defense and health insurance. He’ll try to steer the debate toward one of his strong suits, foreign policy. And he’ll run on his resume. With the exception of Sanders, no one on the debate stage can match his tenure in elected office.

Biden aides signaled a possible line of attack against Warren: The former vice president plans to call on all candidates to be transparent about their past business dealings. While the obvious target of the attack is President Donald Trump, it could also apply to Warren, who advised corporations on bankruptcy issues before she became known as a champion of consumer protections after the 2008 financial crisis.

Warren says her strategy remains the same as ever: lay out detailed policy plans while making every issue an argument for bigger, structural change in American politics. And with polls showing her gaining ground on Biden, she sees no need to alter that message.

“For me, this is just a better chance to talk about why I’m in this fight,” she told reporters in Austin, Texas, on Tuesday. She said she would define herself “the way I have all along. And that is, I’m someone who will fight for your family. I’m not here to fight for the rich and powerful.”

Sanders has honed his democratic socialist message over three decades and hasn’t changed it much as a candidate for president. An adviser, Jeff Weaver, said he doesn’t expect the Vermont senator to pick fights – especially with Warren, a senator from neighboring Massachusetts, with whom he’s had an informal nonaggression pact through the first two rounds of debates.

“He’s going to offer substantive solutions to America’s problems – bold, progressive plans that will energize the party and the grassroots,” Weaver said.

Kamala Harris landed a blow on Biden in the first debate when she challenged his record on busing and school desegregation, but then faltered in the second debate when Biden fought back. This time, the California senator intends to train her eyes on a different target.

“Kamala will take on Donald Trump directly,” said Press Secretary Ian Sams. “She’ll make the connection between his hatred and division and our inability to get things done for the country.”

Pete Buttigieg was relatively restrained in the first two debates, staying on message even as others were mixing it up.

A campaign aide said he expects Buttigieg, the mayor of South Bend, Indiana, to be more aggressive in drawing contrasts with the other candidates, but without losing the cool, Obama-like tone he’s tried to cultivate.

Some of the more aggressive debaters in June and July – Bill de Blasio and Kirsten Gillibrand – will not be there. De Blasio did not qualify, and Gillibrand dropped out of the race on Aug 28.

To contact the reporter on this story: Gregory Korte in Washington at gkorte@bloomberg.net

To contact the editors responsible for this story: Wendy Benjaminson at wbenjaminson@bloomberg.net, Max Berley, John Harney

Ohio police respond to call about armed man, take him, and...