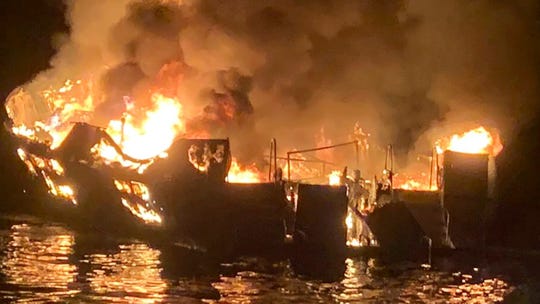 A preliminary report on the Labor Day fire that destroyed the dive ship Conception near Santa Cruz Island could be issued as soon as Thursday, the National Transportation Safety Board said. The cause of the fire likely won’t be addressed, but NTSB members have said how batteries and electronics were stored and charged is being scrutinized.

The Coast Guard said it has convened a Marine Board of Investigation to determine the cause of the blaze. But the bulletin noted that it does not have to await the board’s findings before taking “immediate and positive” action.

“In some instances, our marine casualty boards identify pressing safety issues related to vessel stability, the engine room or lifesaving and firefighting equipment,” said Capt. Jason Neubauer, chair of the Marine Board of Investigation. “In those instances, we issue safety alerts or bulletins.”

The law that could make a difference: Charges in California boat fire may hinge on 1838 law. Here’s why

The recommendations included ensuring that all required firefighting and safety equipment is on the boat and operational, that emergency escapes are clearly recognizable and functional and that crew members understand their roles.

Boat operators also should “reduce potential fire hazards and consider limiting the unsupervised charging of lithium-ion batteries and extensive use of power strips and extension cords,” the bulletin said.

The batteries, found in millions of electronic devices around the world, charge and discharge by moving lithium particles between a negative and positive electrode. The particles are suspended in pressurized cells inside the batteries – filled with volatile, flammable chemicals. Incidents of rechargeable battery fires, however, are extremely rare.

“The intensity of the fire surprised people,” Peter Goelz, former managing director of the National Transportation Safety Board, told USA TODAY. “If it was being fed by lithium batteries, that might explain it.”

In this Sept. 2, 2019, file photo, provided by the Santa Barbara County Fire Department, the Conceptiion is engulfed in flames after a deadly fire broke out aboard the commercial scuba diving vessel off the Southern California Coast. (Photo: AP)

Goelz says he’s never heard of charging stations being linked to a boat fire – but he was not surprised by the bulletin. On commercial airplanes, crew members have gloves, tongs and flame-smothering bags at the ready, he noted.

More than 30 divers spending a long weekend packed on a boat could have a lot of phones, cameras and laptops to charge, he said. One survivor even suggested the fire may have started in an area where electronics were charging.

“I’ve heard that a lot of attention is going there,” Goelz told USA TODAY. “Did they have a charging station of epic proportions? Were electronics stacked up? We don’t know yet.”

The Coast Guard Investigative Service, FBI and Bureau of Alcohol, Tobacco and Firearms are supporting a Department of Justice criminal investigation into the tragedy, the Coast Guard said.

Teacher, biologist, nurse: These are some of the victims of the California boat fire

A total of 39 people were aboard the boat for a holiday weekend expedition when the fire started at about 3 a.m. local time. Five crew members who were on the deck fled and were rescued. The victims, 21 women and 13 men ranging in age from 16 to 62, apparently died from smoke inhalation, authorities have said.

Divers found the body of the last victim Wednesday. DNA testing was being conducted to confirm identities of seven of the 34 victims, the Santa Barbara County Sheriff’s Office said.

Sheriff Bill Brown said the sleeping compartment was on the bottom deck of the ship and that the passengers likely were asleep when the fire started.

“This is probably the worst-case scenario you could possibly have,” Brown said that day. “You have a vessel that’s on the open sea in the middle of the night. Fire is the scourge of any ship. … You couldn’t ask for a worse situation.”

Judge Judy vows to ‘fight’ Bernie Sanders and his supporters ‘to...