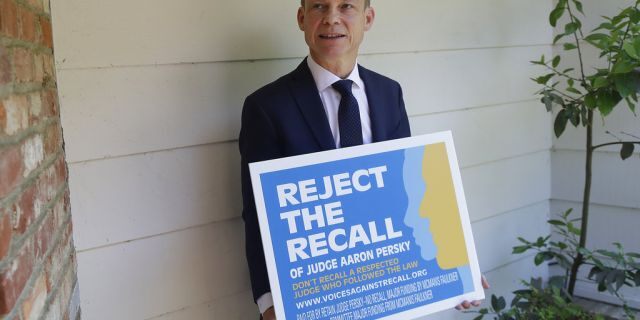 The Fremont Union High School District initially announced Tuesday that Persky was hired to head the junior varsity girls tennis team at Lynbrook High School in San Jose.  But the district reneged on its decision Wednesday, announcing in a statement at 4 p.m. that Persky had been let go.

“We believe this outcome is in the best interest of our students and school community. The District will begin the search for a new coach immediately with the goal of ensuring that the athletes on the JV tennis team are able to have a successful season. Both the Lynbrook and District staff will be supporting the team and their families throughout this transition,” the statement said.

In response to his dismissal, Perksy released his own statement that said Superintendent Polly Bove told him “she was motivated by a desire to protect the players from the potentially intrusive media attention related to my hiring.”

“Although I am disappointed with the district’s decision, it was a privilege to coach the team, if only for a short time,” the statement continued, according to the Mercury News of San Jose. “I wish all of the players the best in their future academic and athletic endeavors.”

Rachel Zlotziver, the district’s communications coordinator, said Persky applied for the coaching position over the summer and completed all of the district’s hiring requirements, including a fingerprint background check.

“He was a highly qualified applicant, having attended several tennis coaching clinics for youth and holds a high rating from the United States Tennis Association,” she added, according to the San Francisco Chronicle.

Lynbrook High School held a meeting Monday with the parents of JV and varsity girls’ tennis teams in response to the community’s concerns over Persky’s employment.

In 2016, Persky sentenced Turner to six months behind bars after a jury found the then 18-year-old college sophomore guilty of sexually assaulting an intoxicated, unconscious woman outside an on-campus fraternity party. Two Swedish graduate students found Turner on top of the woman’s half-naked body near a dumpster.

The former judge ignored the prosecutors’ recommendation of a seven-year sentence, prompting critics to launch a recall effort in mid-2016 in what is considered one of the first tests of the #MeToo movement’s political strength. Turner was released early on good behavior after just three months and was required to register as a sex offender for the rest of his life.

More than 60 percent of Santa Clara County voters who went to the polls voted to recall Persky in June 2018. He is only the fifth judge in California history to be removed from office before serving his full term and the first to be ousted in 86 years, the Mercury News reported.

The case garnered national attention when BuzzFeed published the victim’s 7,000-word emotional account of the attack and its aftermath, which she read in court during Turner’s sentencing hearing. The statement eventually was read on the floor of the U.S. Capitol during a congressional session.

The woman who Turner sexually assaulted, previously identified in court documents under the pseudonym “Emily Doe,” revealed her name last week: Chanel Miller. She is scheduled to release a memoir titled “Know My Name,” on Sept. 24.

‘I’m Not One of Those People Who’s Like Going Out of...