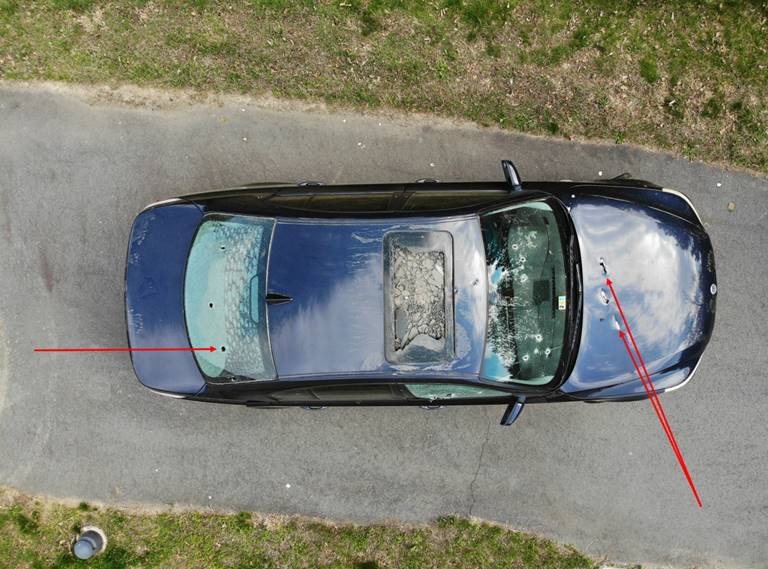 Often when we see unmanned aerial systems (UAS) demonstrations, or hear about public safety agencies adopting drone technology, the focus is on dynamic operational deployments. Videos of fleeing suspects spotted by a drone overhead, or lost people found by search and rescue teams leveraging UAS technology offer compelling images. While such use cases do occur, they are generally rare in comparison to the opportunities to increase safety and efficiency by leveraging drones for documentation missions.

UAS offer public safety a tool that can bridge the gap between spaces that are too high to reach with a ladder, and too low for manned aviation to be effective, either due to altitude constraints or rotor wash affecting the scene.

UAS systems don’t take the place of conventional tools such as photography, video, 3D laser scans or other measurement tools. They offer investigators alternatives in some instances or a means to augment the tools and techniques they are already using.

An aerial viewpoint can provide an enhanced perspective of the scope and scale of scenes. Think of it as the floor plan accompanying photos of a home for sale – it orients you to where the things you’re seeing in pictures are located relative to each other. In some instances, the UAS is simply a safer way to put a camera into a location that might otherwise be a challenge to reach or pose a safety hazard for a photographer, such as in structural collapses or investigations involving fatal falls from heights.

Crash reconstruction investigations have historically required personnel to be in the roadway to perform the work of gathering measurements, photographing aspects of the crash and sketching scene details. These investigations inherently coincide with circumstances when crashes are more likely, notably in low light, poor weather and/or on hazardous stretches of road. Investigators assume a degree of risk simply by working in the roadway for prolonged periods of time. Motorists travelling in the vicinity of an investigation are at greater risk of being involved in secondary crashes due to altered traffic patterns while the investigation occurs. Minimizing this time isn’t only favorable in terms of convenience; it’s a very real safety issue for both investigators and the community.

It’s important to note that the time it takes to conduct investigations using a UAS doesn’t actually decrease; only the time spent at the scene does. Measurements and diagramming take investigators the same amount of time or more. However, instead of doing all of the work in the field, more of it can be completed on a computer, often with better results. Leveraging software or pairing the UAS with certain peripheral payloads can afford investigators considerably more options to document and preserve the circumstances of a case.

A photograph or video maintains a 2D representation of a scene. A map or diagram might not be to scale but can serve for demonstrative purposes to orient some things in relation to others. Orthophoto is the use of software to digitally stitch images together – multiple images combined into a seamless flat rendering, but not to scale. This can be effective to illustrate expansive scenes. Photogrammetry is a science relying on specific spatial calibration to accurately correlate points within an image. Leveraging specific software and laser scanners with a UAS can yield a model that accurately preserves the scene in a 3D point cloud environment.

Models that provide a 3D rendering of a scene or large evidence items, such as vehicles, complemented by video from an aerial point of view, can allow detectives to verify information obtained later in the course of an investigation. We can imagine a scenario where information is unknown, or a victim is injured to the point of incapacitation at the time of the initial investigation. Detectives may have the opportunity to measure pertinent points days or weeks later with the same accuracy as though the scene was still being actively preserved. These renderings provide best evidence at court and give jurors and judges a more compelling sense of the investigative findings.

Public safety equipment and training should be selected based on specific needs. UAS technology, including peripheral equipment, is no exception. While not a comprehensive list, the following are some general considerations for agencies considering adopting UAS for documentation missions:

Utilizing a UAS over a public roadway to document the circumstances that led to a vehicle crash generally has less privacy implications than deploying a drone over a residential neighborhood during an emergency. Introducing a UAS program as a limited documentation tool is likely to be met with less opposition than technology intended to serve as an aerial tool to gain real-time intelligence, even in situations that are justified.

It is advantageous to be transparent in the adoption of technology by proactively working with community members who may be apprehensive about a UAS program. By inviting stakeholders into the conversation early, you can clarify expectations and intentions.

Investigators have a solemn obligation to document circumstances when a life is lost, or a person is victimized. Whenever we consider adopting emerging technology, we must ask ourselves: “Are we using the tools available to us to do the best work in the safest manner with a sense of fiscal responsibility, while being sensitive to the wishes of the communities that we serve?” UAS offers detectives a tool to collect best evidence in a safe and efficient manner, often at a reduced cost in comparison to using manned aviation, but this technology must be implemented thoughtfully to ensure success.

Major Christian Quinn is a veteran law enforcement leader and currently serves as the Commander of the Cyber & Forensic Bureau with the Fairfax County Police Department in Fairfax, Virginia. Mr. Quinn holds a Master of Forensic Sciences Degree from the George Washington University and is a graduate of the FBI National Academy.