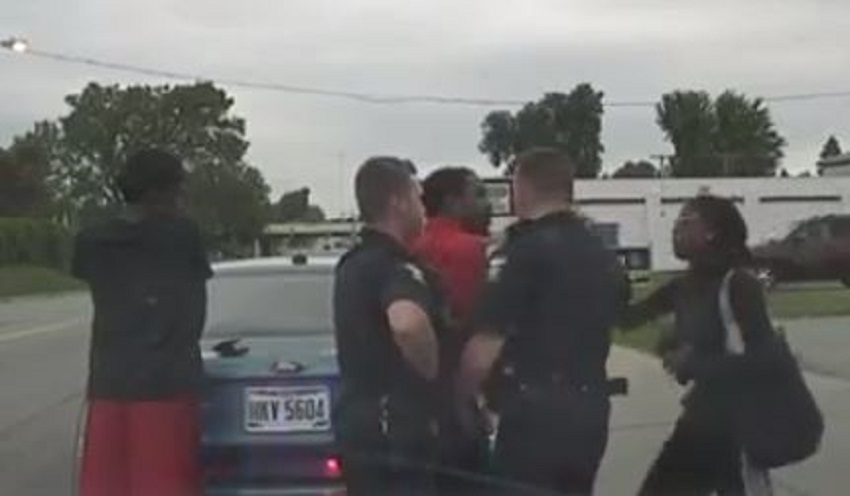 At the center of the controversy is a violent struggle between detectives and a 21-year-old woman — Jannah Wyley — whose twin brother, Jabril Wyley, was a passenger in a car pulled over in North Toledo Friday. Police contend the woman punched an officer as he was trying to detain her brother, while witnesses recording the event expressed outrage as Miss Wyley was seemingly manhandled and struck by a much larger man.

The dash cam video shows two officers and the twins fall off to the side outside the view of the camera shortly after the altercation begins. The woman can then be heard yelling “stop!” followed by: “Ah! he just punched me!”

As the struggles continue, an officer can be seen in the footage raising a closed fist. It’s unclear if he connected on a punch.


Toledo’s mayor on Monday defended the actions of police officers involved in the stop, while a city council member and a representative of the family involved demanded answers and accountability.

Miss Wyley and Mr. Wyley, both 21 and of the 2300 block of Lagrange Street, were arrested and booked in the Lucas County jail Friday after that altercation unfolded at Lagrange Street and Manhattan. The viral video of the incident captured by a bystander and originally shared online Friday night shows at least three officers grappling with the twins. Witnesses can be heard yelling and questioning why an officer is “punching a girl.” A Toledo police spokesman, though, said Miss Wyley should have listened to nearly 10 orders to back away from the traffic stop instead of intervening and punching an officer in the moment leading up to the start of viral video recording.

Toledo Mayor Wade Kapszukiewicz said that, while he understands why many community members perceived the arrest in question as being overly aggressive and violent, he believes the officers involved handled the situation appropriately.

“[The video] shared on social media on Friday didn’t show all the events,” he said. “It showed events once the arrest had already graduated into a pretty acrimonious stage, for lack of a better phrase. In other words by the time the video Friday started filming, there were some important things that had already happened. Not the least of which, was the officer getting punched in the face several times.”

Toledo native Gerald Rose, founder of New Order National Human Rights Organization based in Atlanta, said he has been contacted by the family regarding the incident and he will be coming to town next week to “demand answers” from police. Mr. Rose said he spoke with the siblings’ mother as early as Monday morning and ensured that her children will be provided legal representation as they go through the legal process.

“The City of Toledo — my hometown — this issue will not be swept under the rug, period,” Mr. Rose said.

Mr. Rose also questioned a male officer’s use of force on a thin-framed female — Miss Wyley — as shown in the video.

“When you have an officer that big, he could have restrained her and handcuffed her. It was very unacceptable … You need not to convince not just myself, but the whole City of Toledo,” Mr. Rose said. “They could have handled the situation differently.”

Councilman Yvonne Harper said she has requested an update from the Kapszukiewicz administration regarding the status of the city’s review of the incident. She said she is looking for “immediate” answers.

“I am very uncomfortable with what I’ve seen, as is the entire community,” Ms. Harper said.

The incident in question started when police stopped a 2009 Ford Fusion driven by Quinlan Cook, 22, around 5:30 p.m. Friday. Police said the vehicle was initially stopped because it had heavily tinted windows — a misdemeanor offense in Ohio — though without physical testing it’s not clear if the windows were dark enough to violate the law. During the stop Mr. Cook was found to be driving with a suspended license, leading to a search of the vehicle as the Ford would have to be impounded.

“That is just one of the investigative tools that we use, stop cars in violations to talk with people,” Lieutenant Toney said.

While Detective Schotter stood with Mr. Wyley, Detective Gruenberg searched the vehicle and found a bag of marijuana, police said.

The cruiser dashboard camera footage released Monday captured the initial parts of the incident. Security footage released by police from a nearby business only recorded in spurts — with large gaps of time in between the recordings.

Once the detectives removed Mr. Cook and Mr. Wyley from the car, Miss Wyley arrived at the scene after running from down the street. Detective Schotter ordered Miss Wyley to step away from the vehicle multiple times. Police said she instead attempted to stop officers from handcuffing her brother.

The dash cam video shows the two officers and the twins fall off to the side outside the view of the camera shortly after the altercation begins. There have been no recordings released of Miss Wyley striking an officer.

Police reports state the woman struck Detective Schotter multiple times in the face with a closed fist as the officer wrestled with her brother. Detective Gruenberg then struck her twice with what police described as an “open hand stun technique” similar to a slap.

Detective Gruenberg pulled Miss Wyley aside and ordered her to place her hands behind her back. He then held her head down to prevent her from biting or spitting, police said. She was then arrested.

“Any time an officer uses force to defend himself or herself — it’s not going to look good. It’s going to look violent because that’s the nature of these type of things, but you have to look at the totality of the circumstances, you can’t just see one little clip of video and make that determination,” said Lieutenant Toney.

Detective Schotter had swelling and cuts following the confrontation, but he did not require hospital treatment. Neither of the Wyley siblings were injured, police said.

Toledo police policy permits officers to use physical force techniques that are “objectively reasonable,” depending on the situations they face, according to policy language. Based on the department policy, a person spitting at an officer may be subject to weaponless strikes, punching, or kicking; chemical agents; a taser; or baton restraints.

Likewise, an officer being struck, kicked, or bitten may respond in all of the previously mentioned techniques, along with a baton strike. An officer must complete an action response form following such an incident, which is passed up the chain, per department protocol. Police officials said the incident will be reviewed by department command.

“However, one concern about GTF getting cameras is that part of their job is developing confidential informants and speaking with witnesses during investigations,” he said.

“I am being sincere when I talk about the importance of transparency, democracy, performing best in the sunlight, so I’m a big proponent of dashboard cams, body cams and not just cams, but [microphone] capabilities,” he said. “… I don’t know why it hasn’t happened yet. I don’t know if it was a budget thing or logistic. That I don’t know. But in terms of, do I believe we should have it? Absolutely. And so does the chief.”

Mr. Rose acknowledged the entire situation may not have been caught on camera and “not all officers are bad,” but he said he intends to keep pressing for more answers and insight into what exactly transpired that night.

“I’m going after this officer’s background to see if this happened before, if this could have happened before,” Mr. Rose said. “What I see I’m just very concerned when officers do things like this.”

Miss Wyley, meanwhile, is charged with a felony offense of assault on a police officer.

She appeared in Toledo Municipal Court Monday and was ordered to reappear later this month before being released by the judge.

Mr. Wyley, who was previously released on his own recognizance, appeared without an attorney in a separate courtroom Monday. He entered a not guilty plea to a misdemeanor resisting arrest charge and will be appointed a public defender.

As the 36-minute video rolls, the interaction between Miss Wyley and officers plays out once tempers have cooled. Miss Wyley asks if her elbow is bleeding in a matter-of-fact voice and complains that her arm hurts.

She next asks for the name of the officer who slammed her to the ground.