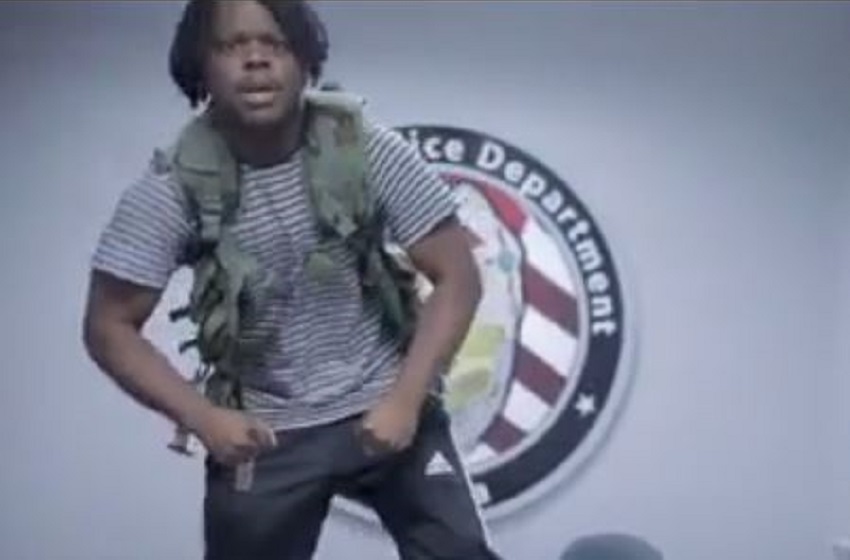 The video starts out with South Florida rapper IV Leo Little sitting on the ground next to a Broward County Sheriff’s Office patrol car, his hands seemingly handcuffed behind his back.

Aventura police never signed off on the production.


But it’s only in the last few days that Little posted the 3-minute, 24-second production on WorldStarHipHop’s Instagram account. By Monday morning, it had been viewed more than 650,000 times. On YouTube, it wasn’t doing as well, with less than 2,000 views.

In the video, in addition to his visit to the police station, Little holds a gun while singing in a car and dances around with a semiautomatic rifle. “Boom boom, shoot a n—–,” he sings.

The song itself, a single called “Bus,” was released in December. It is selling on Amazon for 99 cents.

When Little made the video, he simply walked into Aventura’s unmanned lobby about two years ago, police said, with a partner recording him with a video camera. At the time, the police department left its front doors unlocked at night and anyone needing help could click a buzzer inside the station to attract an employee’s attention.

Aventura police said they have since changed their policy, now securing the lobby area and requiring visitors to buzz in from the outside before entering.

“There was no damage. It would have been petty on our part,” to try and charge Little with a crime, Bentolila said. “He didn’t try to gain access. He just came in and acted the fool.”

“It’s hubris,” said the police union president. “But in the age we live in, a video can be made in just a couple of minutes. And with today’s heightened security, now you have to secure that area.”

Maxine Waters on Possible Trump Acquittal: ‘We Will Not Stop’ Investigating...