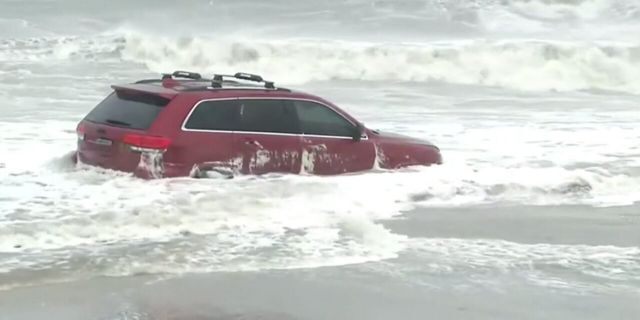 As Hurricane Dorian raged off the coast of the Carolinas on Thursday, a unique sight appeared on the shores of Myrtle Beach, S.C.

A Jeep SUV was seen stuck on the beach as fierce waves from the hurricane could be seen battering the vehicle.

The Myrtle Beach Police Department told WPDE they were notified about the vehicle early Thursday morning. Authorities found the car locked and abandoned on the beach.

A Jeep SUV can be seen on Myrtle Beach on Thursday as Hurricane Dorian impacted the area.
(WPDE)

Due to ongoing severe weather conditions, officials said on Twitter that it’s not safe to remove the vehicle.

“Thank you for the calls in reference to the vehicle on the beach,” the Myrtle Beach Police said. “We are aware and we are working with our team to develop a plan to remove it however, it is not safe at this time. As we want to keep you safe, do not approach the vehicle. Public safety is a shared responsibility.”

As time progressed on Thursday fierce waves engulfed the Jeep, knocking its bumper off. Onlookers could be seen taking photos of the Jeep and selfies before police cleared the beach area.

One man was seen posing for a photo on top of the vehicle as it was engulfed by water.

People can be seen taking pictures of the stuck Jeep before being cleared out of the area by police.
(WPDE)

HURRICANE DORIAN’S PATH: WHAT YOU NEED TO KNOW

But forecasters say that’s still strong enough to cause damage along the coast of the Carolinas, where the storm is now close enough for hurricane-force winds to hit land.

The National Hurricane Center has said large and destructive waves up to 8 feet high could be seen in Myrtle Beach if peak surge happens during high tide.

In Charleston, city officials said nearly 150 trees have been toppled as the area gets pummeled by Hurricane Dorian’s winds and rain. Over 100 roads are also closed due to flooding and downed power lines.

One live wire on a flooded street outside the Charleston City Market was sparking, causing explosions that could be heard blocks away. Forecasters said up to 15 inches of rain could fall in the Charleston area, and up to 20 inches possible nearby.

The hurricane also is threatening tornadoes across the region.