Home Conservative Life Many feared dead after boat bursts into flames off California and more... 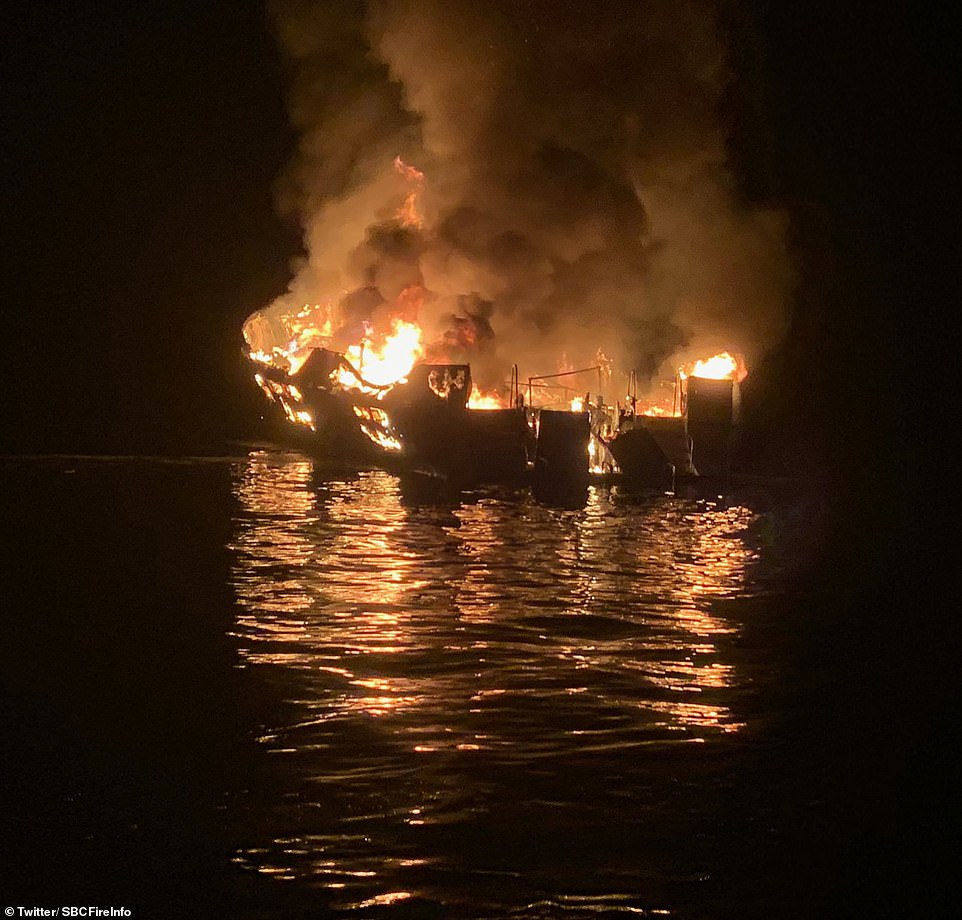 Dozens of people are feared dead after a 75-foot dive boat burst into flames off the coast of California.

The vessel was anchored near Platts Harbor on the north side of Santa Cruz Island when it caught fire in the middle of the night while passengers were sleeping below deck.

‘We’re still holding hope that someone may have swam to shore,’ Eliason told CNN.

‘When they anchor overnight they’re pretty close to shore. We have to hope, but we plan for worst case scenario.’

Emergency crews received a call just before 3.30am local time on Monday. Rescue efforts involving multiple agencies and personal watercraft were still underway as of 8am PST as Eliason reported that the boat, called Conception, had ‘burned down to the water line’.

Dozens of people are feared to have died after a 75-foot dive boat burst into flames off the coast of California early Monday. Officials say five people have been rescued and 34 are currently missing 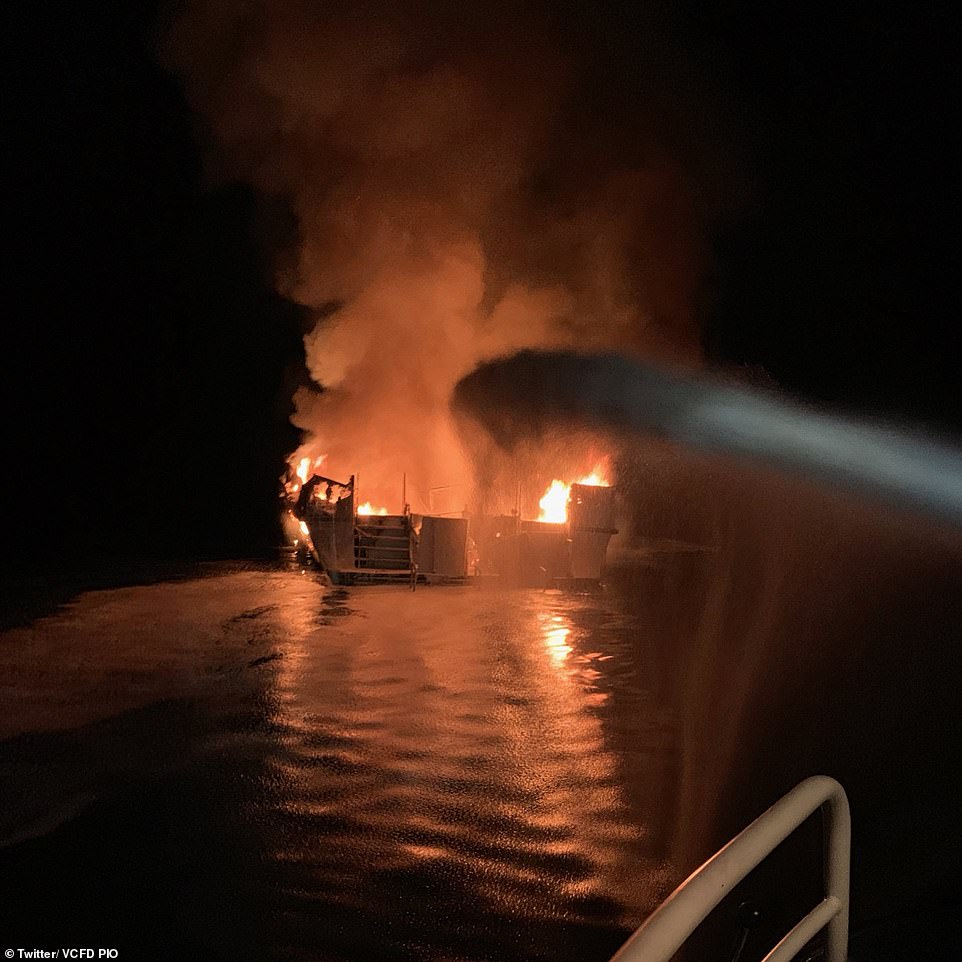 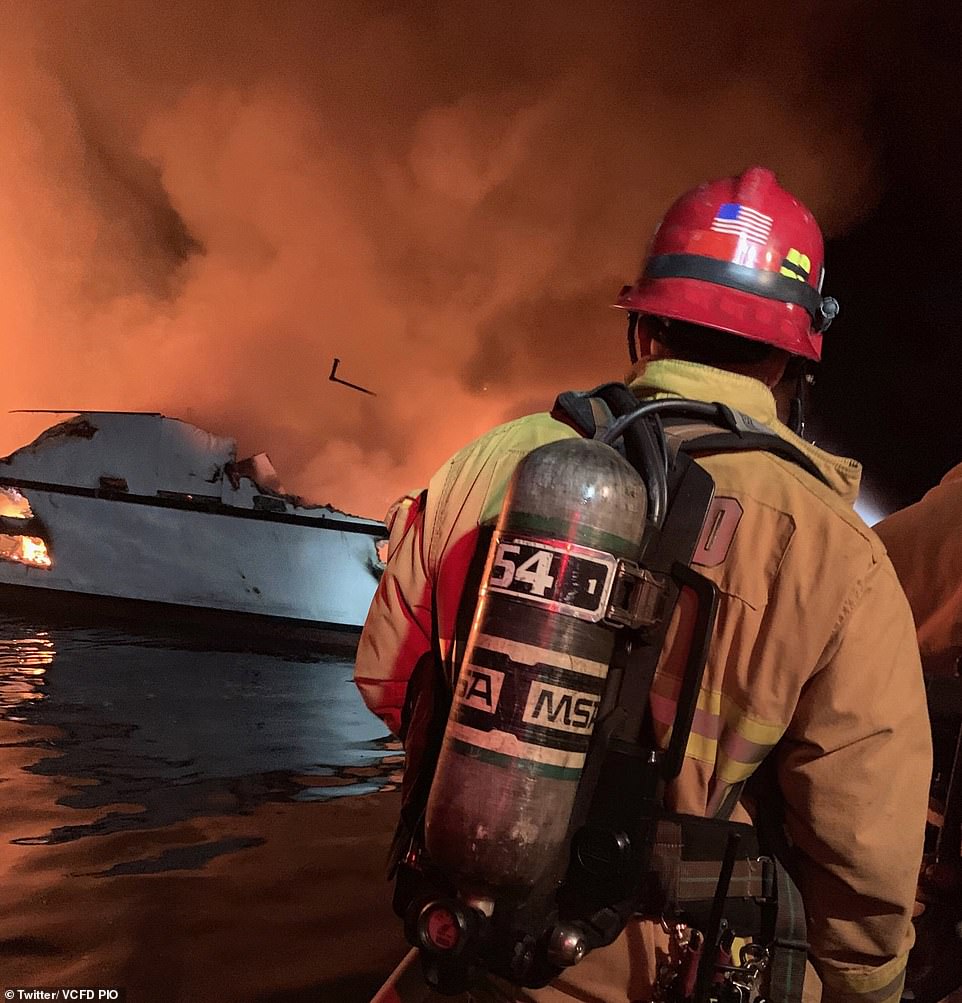 Emergency crews received a call about the fire just before 3.30am local time on Monday, and rescue efforts involving multiple agencies continued for several hours. At 8am an official reported the boat had burned down to the water line 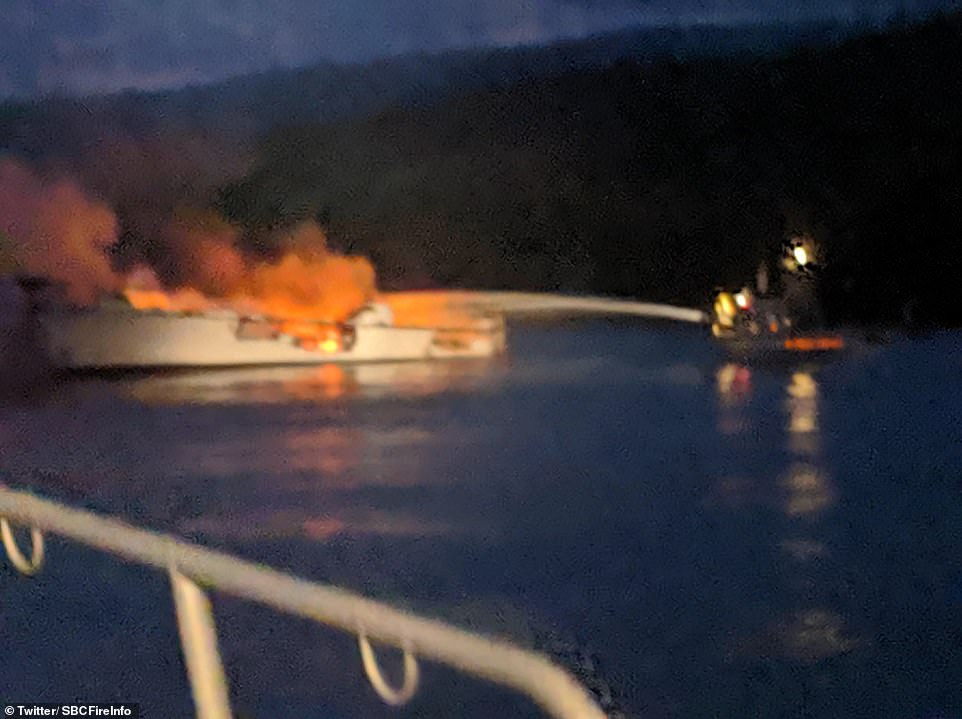 Rescuers were unable to board the boat to check for survivors because it kept reigniting, a senior Coast Guard official said 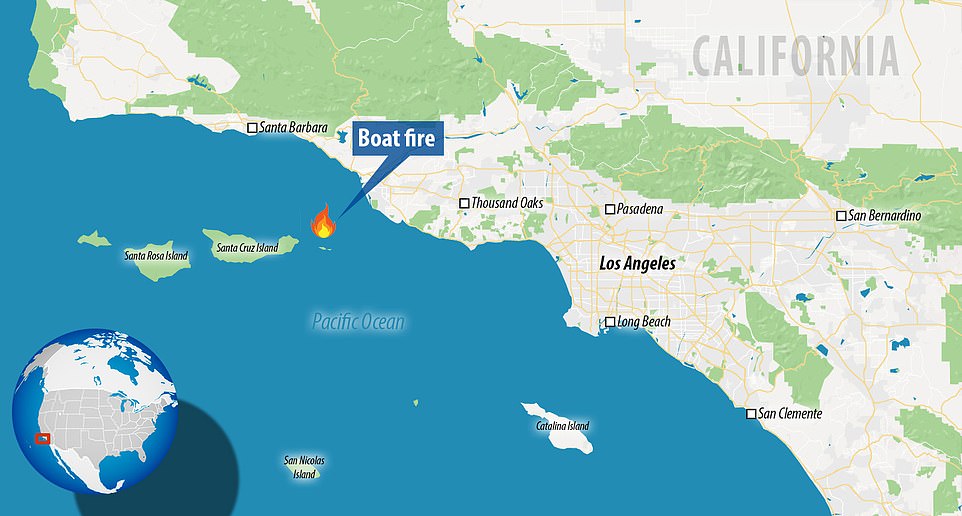 Rescuers were unable to board the boat to check for survivors because it kept reigniting, Coast Guard Senior Chief Aaron Bemis said.

‘It keeps being extinguished and re-flashing, possibly due to the amount of fuel on board. Unsure why, but it’s consistently being put out and re-flashing,’ Bemis said about two hours into the rescue mission.

‘Multiple coast guard and local Ventura County Fire Department assets on scene, but we’re not able to yet breach the hull and see if there’s any survivors at this point.’

‘I’m unaware of any survivors at this time, and I’m also no confirmed casualties at this time. It’s too early to tell.’

Bemis said there were 39 people onboard the boat at the time it caught fire and that 34 passengers got trapped below deck by the blaze while five crew members in the main cabin were able to escape.

Another Coast Guard official said four of the crew members were transported to the hospital while the boat’s captain remained on the scene.

Ventura County PIO spokesman Bill Nash said the death toll is unclear but there are believed to be ‘numerous’ fatalities.

‘It’s a large boat, and we know we have numerous fatalities. I don’t have an exact number,’ Nash told CNN.

He said the fire was about 20 miles off the coast of Channel Islands National Park. Santa Cruz Island is about 18 miles from the mainland and about 60 miles west of Los Angeles

‘We are not sure where it falls jurisdictionally; it’s Coast Guard, Santa Barbara or Ventura,’ he said.

‘Where that plays in, after we figure out what we’ve got, it’s where to transport the bodies.’

Authorities are working on getting a correct manifest of who was on the boat.

USCG Los Angeles confirmed the incident on Twitter at about 5.30am, writing: ‘The Coast Guard has launched multiple rescue assets along with assets from local agencies to assist more than 30 people in distress on a 75ft boat near Santa Cruz Island.

‘More details will be available later as this operation continues.’

About 30 minutes later the agency tweeted: ‘The vessel was reported as being on fire. The a group of crew members has been rescued (one with minor injuries) and efforts continue to evacuate the remaining passengers.’ 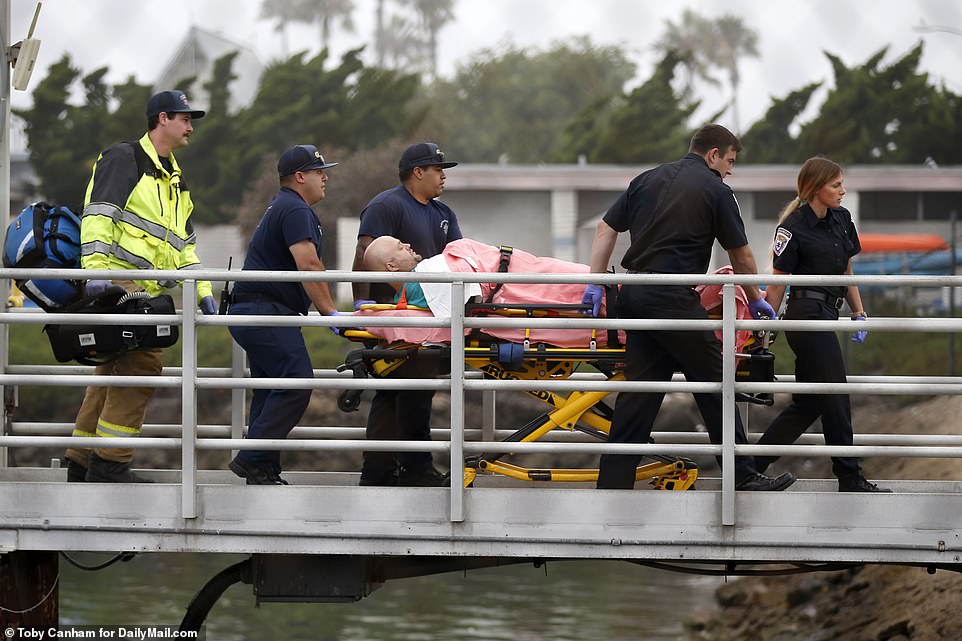 Four of the crew members who made it off the boat were transported to the hospital. First responders are seen bringing a an injured man to an ambulance at Channel Island Harbor in Oxnard 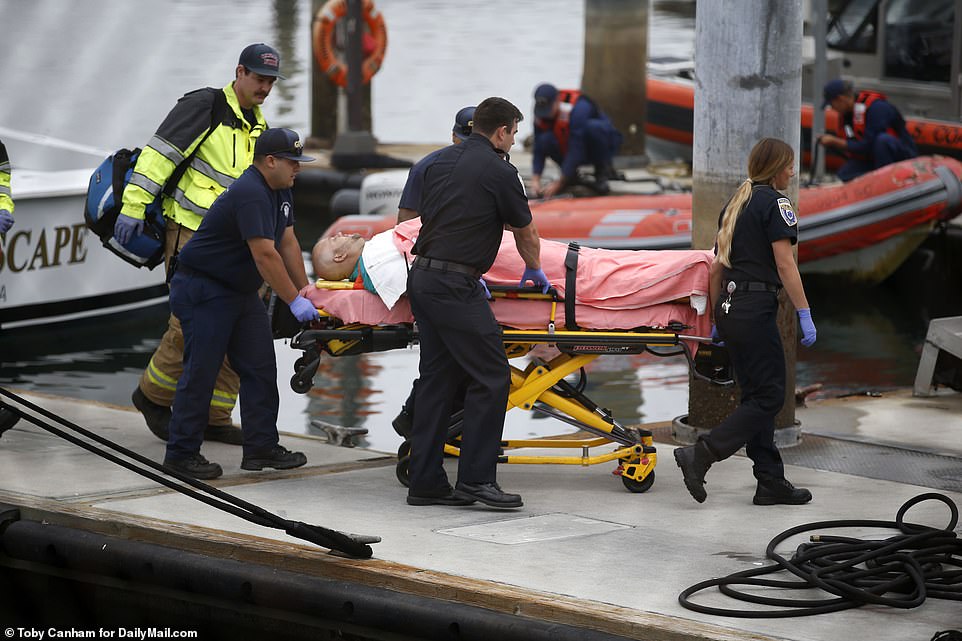 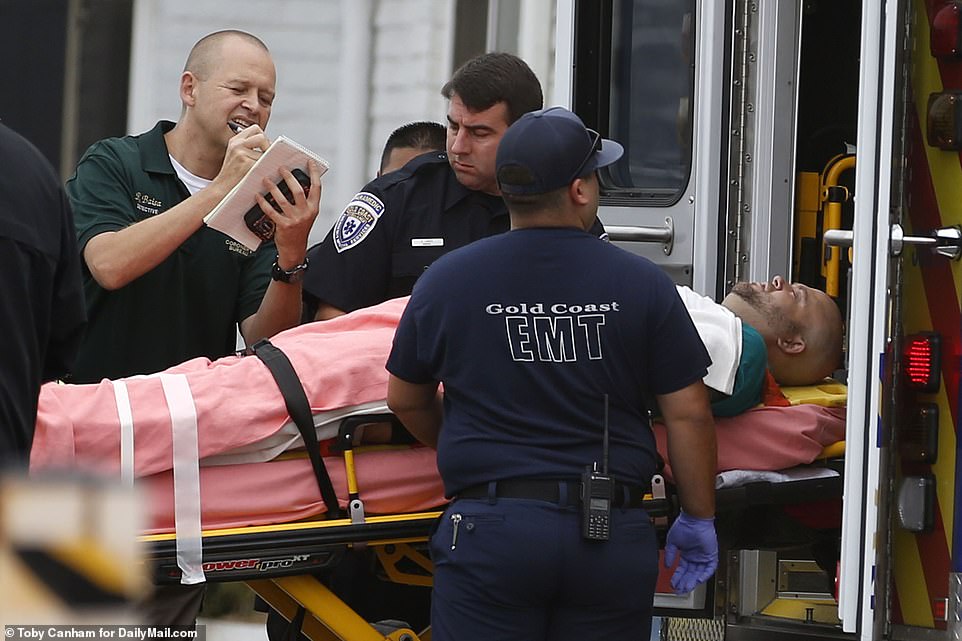 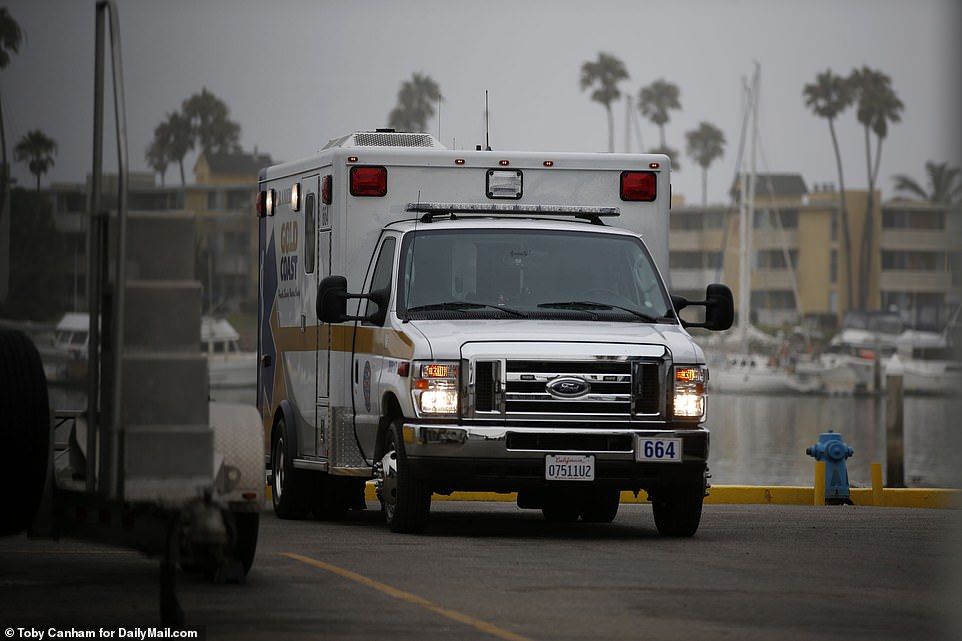 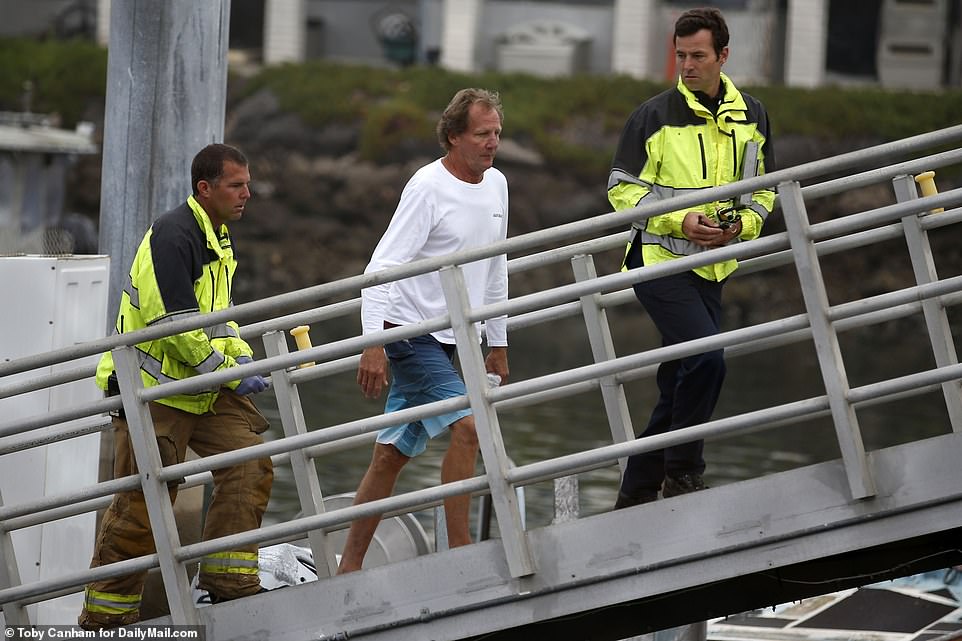 The boat called Conception is owned by diving company Truth Aquatics and based in Santa Barbara Harbor, a harbor patrol officer told CNN.

At the time of the fire it was on a three-day trip to the pinnacles of San Miguel Island, according to the Truth Aquatics website.

Passengers boarded the boat on Friday night and it took off from Santa Barbara Harbor on Saturday morning. It was expected to return Monday evening.

The boat has sleeping space for 46 passengers. The Labor Day weekend trip was described on the website as ‘designed by divers for divers’ and came with a price tag of $665 per person. 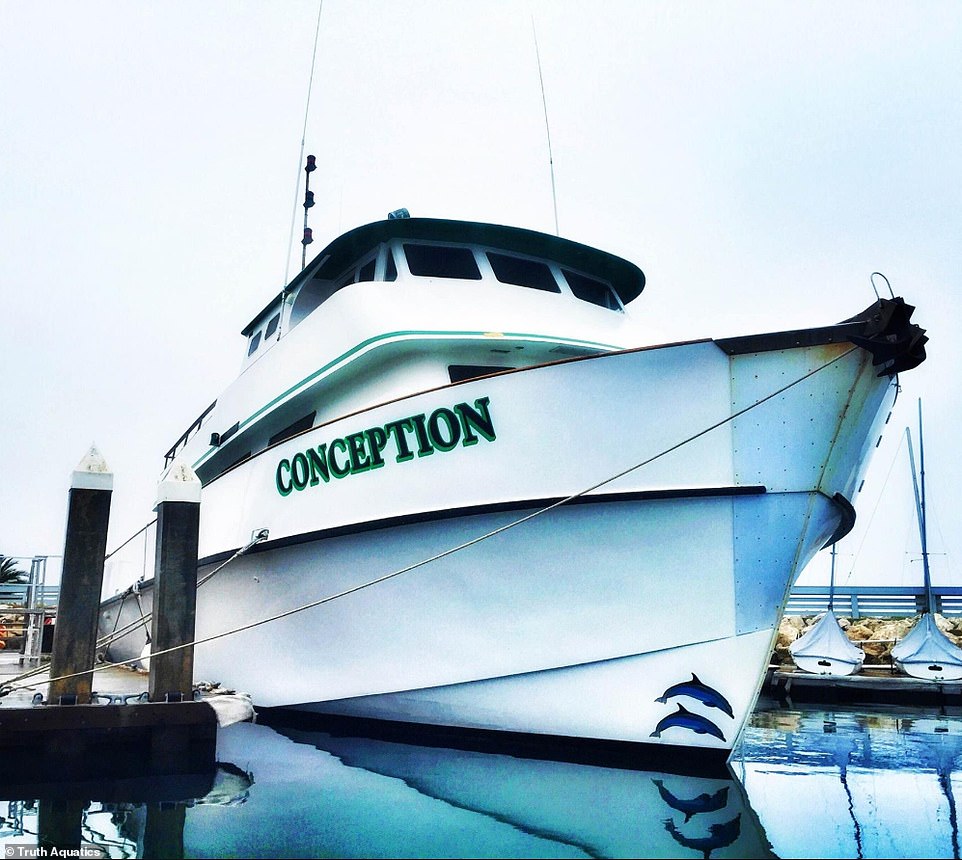 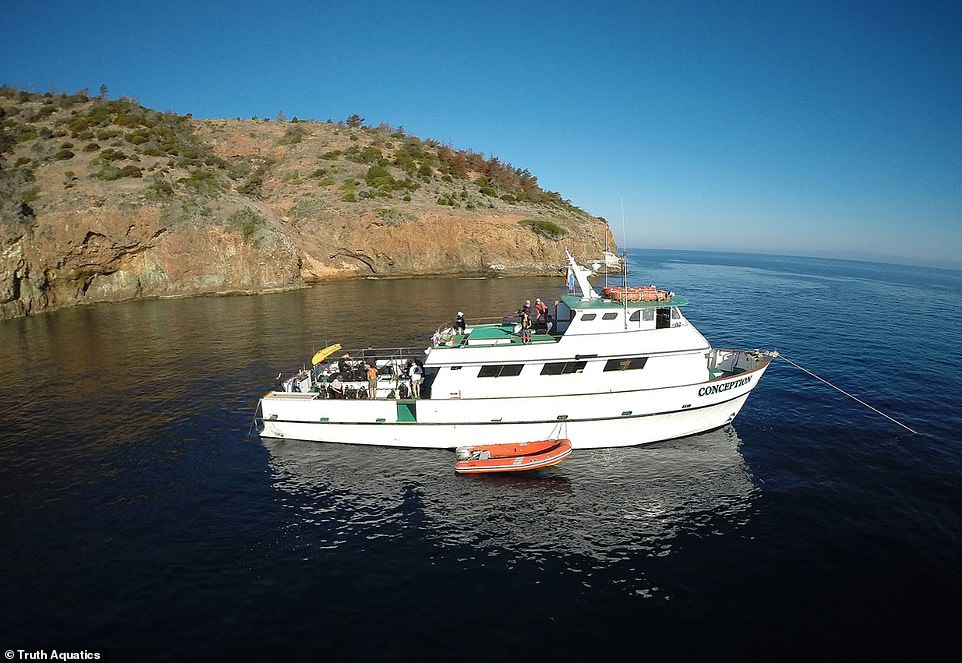 Conception reportedly departed from Santa Barbara Harbor on Friday night for a Labor Day weekend trip to the pinnacles of San Miguel Island and was expected to return Monday evening, according to the Truth Aquatics website 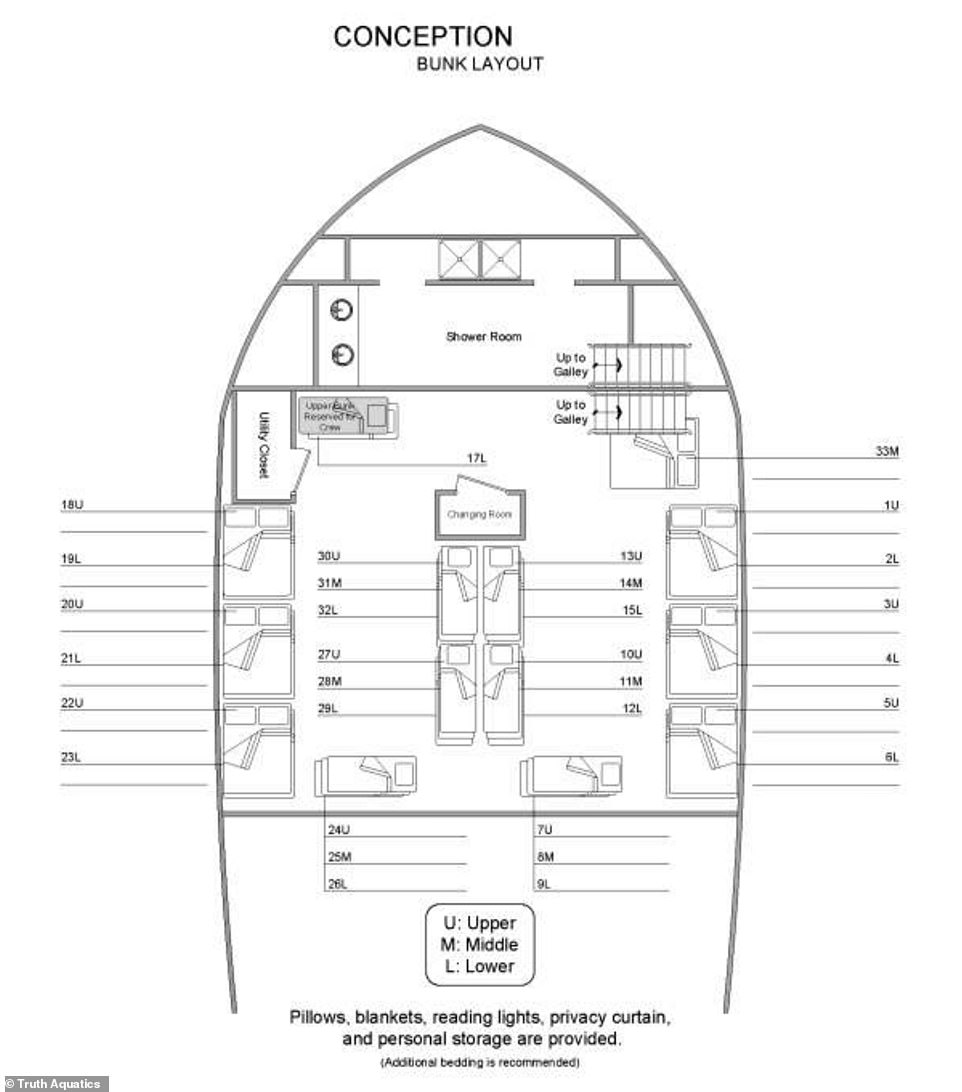 The dive boat has bunk space for up to 46 passengers. The interior layout is seen above 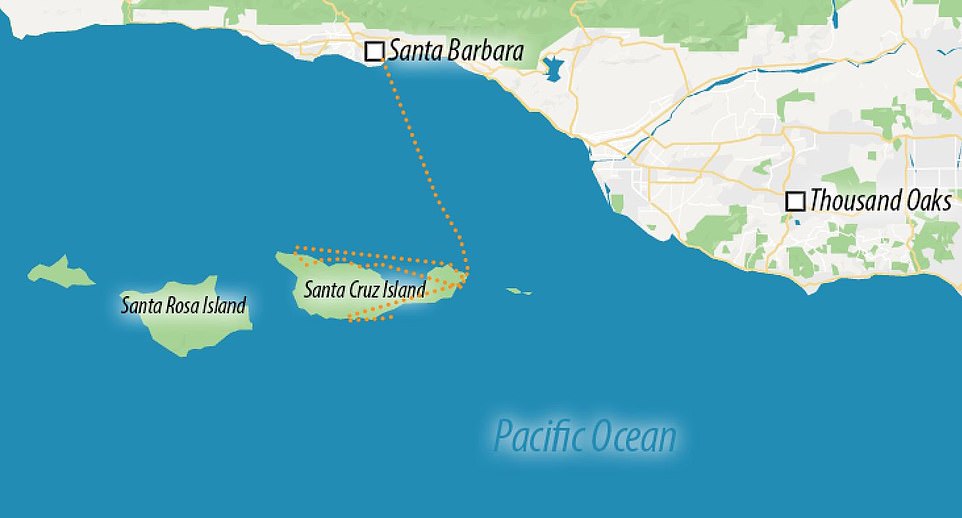 Conception departed from Santa Barbara Harbor early Saturday for a Labor Day weekend trip to San Miguel Island and was expected to return Monday evening, according to the Truth Aquatics website. The route is seen in the map above 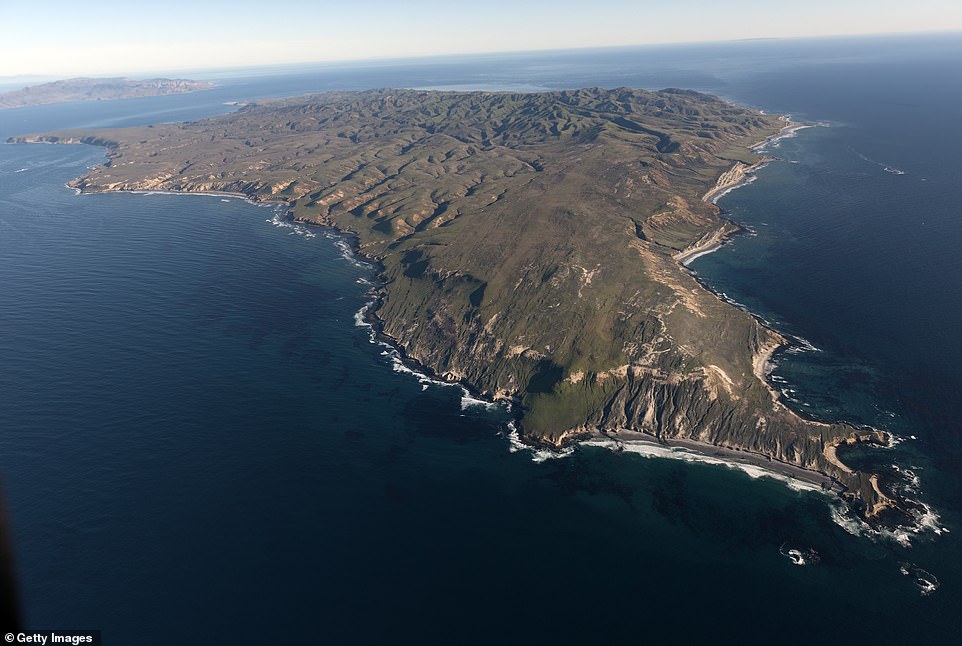