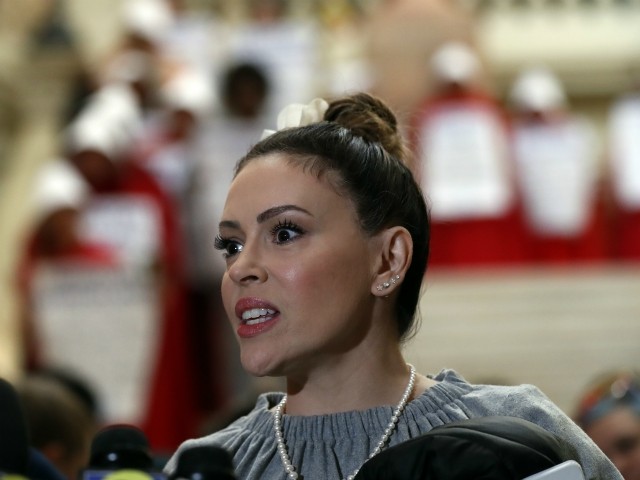 Actress and far-left activist Alyssa Milano shared a fake news story on Twitter about President Donald Trump deporting children with cancer, describing it as “indefensible” and a justification for impeachment.

On Friday, NBC reported that Trump had ended “a policy that allows migrants to not be deported while they or their family members receive life-saving medical treatments.”

As noted by a Breitbart Fact Check, the report was entirely false. No policy like that ever existed, and all the Trump administration is doing is “moving discretion over individual cases from USCIS to ICE.”

After seeing a tweet from California Congressman Mike Levin declaring that Trump “wants to deport sick and dying children receiving lifesaving medical care that is not available in their home countries,” Alyssa Milano retweeted it to express her outrage.

“Impeachment this asshole now,” the Insatiable actress said. “This is indefensible.”

Impeachment this asshole now. This is indefensible. https://t.co/N0UYsL60VA

The 46-year-old actress remains one of Hollywood’s most vocal anti-Trump activists and has repeatedly demanded his impeachment without obvious justification.

In May, Milano promoted a “thread on the steps to impeachment” compiled by Rhode Island Congressman David Cicilline. The five steps involved the opening of an impeachment inquiry, an investigation, the proposed articles of impeachment, a House Floor Vote on Impeachment, followed by a Senate trial.

A thread on the steps of impeachment. https://t.co/8pRVzpcCV5

Last month, Milano also penned a letter to supporters of the left-wing campaign group “Free Speech for People” to promote a book entitled THE CONSTITUTION DEMANDS IT: The Case for the Impeachment of Donald Trump by lawyers Ben Clements, John Bonifaz, and Ron Fein.

“[The book] clearly lays out the ways in which Trump has violated the Constitution (over and over again) and why impeachment proceedings against him aren’t just justifiable — they’re necessary,” she wrote.

“If we don’t stop him, Donald Trump will continue to degrade and violate our Constitution at the expense of all of us, but especially the most innocent and vulnerable among us,” Alyssa Milano continued. “We must educate ourselves and accept nothing less than swift and appropriate action from our elected officials in Congress.”