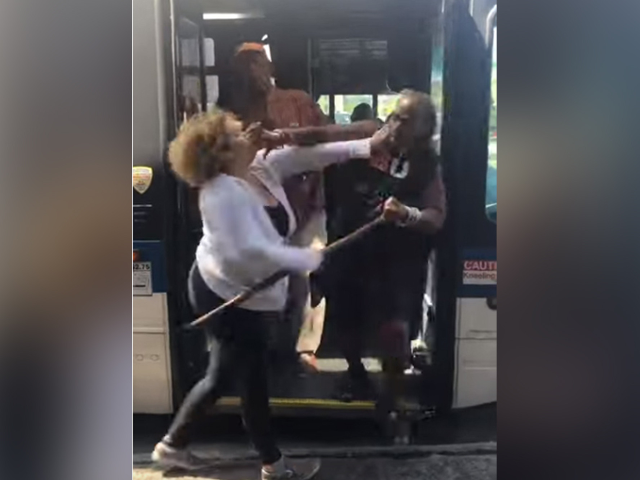 Two Bronx bus riders are accused of brutally beating down an elderly woman after she screamed and used her cane to threaten them, according to a video of the incident.

The melee began after one of the women, who was pushing a stroller with an infant inside, bumped into the 67-year-old woman, the New York Post reported.

The video of the incident showed the two women shouting profanities back and forth, with one of the women telling the 67-year-old woman to “shut the fuck up.”

“You don’t tell me to shut the fuck up. You’re not my mother!” the 67-year-old woman, who was standing in front of an open bus door, shouts back.

The older lady then slammed her cane on the bus floor, challenging both women to a fight.

Both women confronted the older woman, one in front of the open door of the bus on the sidewalk and the other from the inside of the bus.

“It ain’t going to be both of y’all,” the older woman shouted repeatedly while swinging her cane.

At that point, both women pounce on the elderly woman. The video showed one woman allegedly grabbing her cane and using it to hit her in the face.

The other woman allegedly punched the older woman in the face several times before releasing her by the hair, according to the video.

The women then took the stroller and fled the scene. Police responded to the incident, but could not find the attackers. The elderly woman refused medical attention at the scene.

Authorities are still looking for the attackers as of Thursday afternoon.

CNN crew released after being arrested live on air while reporting...